How to Make Apple Cheesecake Recipes

I learned how to make apple cheesecake recipes because this combination made great common sense. First, we all know from the beginning of the American colonies, the apple has been the most important fruit here. It helped to sustain the diets of the early settlers as well as medically helping them though various ailments. When dried and preserved having the apples to eat made living through the hard winters more bearable. 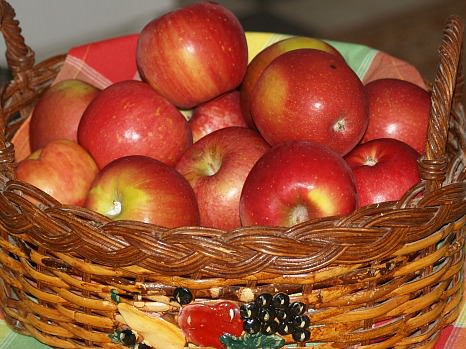 How to Make Apple Cheesecake Recipes

I also learned how to make apple cheesecake recipes because they have a perfect match of ingredients. Since the origination of the Philadelphia Cream Cheese over one hundred years ago the continued production of wonderful recipes have also been developed. The combination of the American apple with the American cream cheese has to produce a delicious dessert. The recipes below will show just that!

HOW TO MAKE AN APPLE CHEESECAKE RECIPE for FALL

Combine the crumbs, 3 tablespoons sugar, cinnamon and butter; press onto the bottom of 9 inch spring form pan and bake 10 minutes.

Combine the cream cheese and ½ cup sugar in a mixing bowl and beat on medium speed until blended; Add eggs one at a time mixing well after each. Blend in vanilla and pour into baked crust.

Toss apple slice with the 1/3 cup sugar and cinnamon; arrange apple slices on the top of the cheese mixture and sprinkle the chopped nuts over the top. Bake for 1 hour and 10 minutes. Loosen cake from the rim of the pan. Let cake cool before removing the rim. Chill before serving. 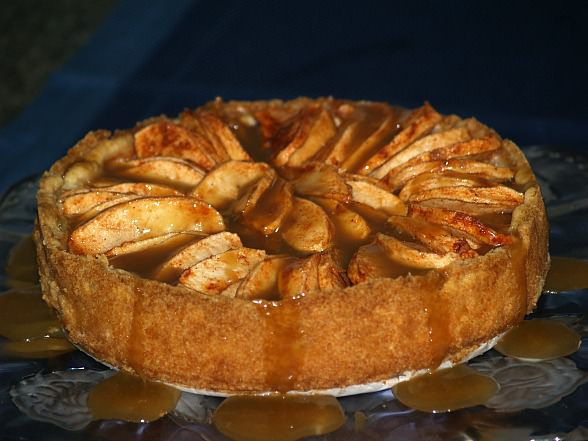 Sift both flours into a small bowl; stir in the ¼ cup sugar.

Cut butter into the flours with a pastry cutter until small crumbs.

Press dough into the bottom of prepared pan and 2 inches up the sides.

Prick bottom and sides lightly with a fork; refrigerate until ready to fill.

Beat the ½ cup sugar and cream cheese together until fluffy.

Add 2 eggs beating after each addition; add vanilla and continue beating until smooth.

Spread over the cold crust.

Mix the 1/2 cup sugar, cinnamon and nutmeg together; sprinkle over the sliced apples tossing to coat.

Arrange the apples on the top of the cheese mixture.

Bake about 50 minutes or until the apples are tender and filling is set.

Melt the butter in a medium saucepan; stir in the brown sugar and corn syrup.

Bring mixture to a boil stirring constantly; boil until sugar dissolves about 1 minute.

Slowly stir the whipping cream into the hot sugar mixture and bring just to a boil.

Quickly remove from heat and cool to warm; spoon over cheesecake. 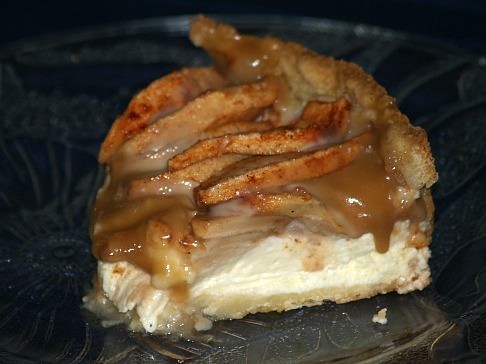 In many apple recipes like the apple cheesecake recipes, applesauce is used in place of the apples. The sauce gives a wonderful apple taste all through the dessert.

All apple cheesecake recipes do not have to be made with cream cheese; try this one made with cottage cheese.