How to Make a Pie

People need to learn how to make a pie. I feel strongly and fear that this is one area of cooking that is quickly becoming one of America’s lost arts. Sometimes I get hungry for a good piece of pie with a cup of coffee. Rather than taking the time to make one, I often go to a restaurant hoping to find one that I consider good. It is pretty bad when you have to turn to the chain restaurants of mass production to get anything near a satisfying piece of pie.

A fruit pie recipe is usually my choice when eating out because it usually is more consistent quality and avoids my disappointment in peoples ability in how to make a pie. Canned pie filling is used diminishing the concern of the fruit being too sweet or too sour; this leaves the only concern with the pastry which is mass produced. These commercial bakeries offer good pie but not exceptional like the old fashion recipes. 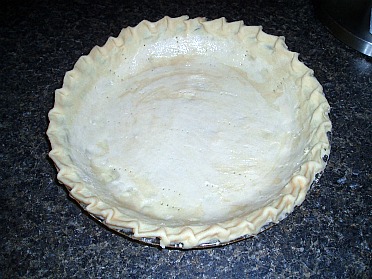 How to Make a Pie

Learn how to make a pie like my mom’s green tomato pie or other old fashioned pie recipes for a ground cherry pie, gooseberry pie or sour cream raisin pie.

Pecan pumpkin pie recipe served with whipped cream, recipe with coconut and one with meringue and praline topping.

I learned how to make a pie years ago and my favorite pie recipes are many of the meringue pie recipes; this is where I see the biggest problem in making pie recipes. Most people cannot make good meringue so they choose to use a prepackage meringue or to heap on some type of whipped topping. Neither of these can take the place of a good meringue recipe.

My favorite five of the meringue pies are the coconut meringue pie, chocolate meringue pie, lemon meringue pie, butterscotch pie and banana cream pie. If I mix up pie dough, I always make five pies so I will make one of each of these pies. Believe me, it is hard to eat meringue pie recipes away from home or those made by someone else because they do not know how to make a pie.

I also include vegetable pies, meat pies and quiches in how to make a pie. Although in the United Sates we typically think of pies as being a dessert like the fruit, meringues or pumpkin these entree pies also fit into this category.

If you are just learning how to make a pie, the first question to be answered is how to make pie crust. Good pastry is flaky, tender, delicate and evenly browned. It is not crumbly but when broken it shows layers of flat flakes, piled one above the other with air space between. To achieve this, the cook must be quick and light handed because the dough will not be good if handled roughly or slowly. The flakiness is caused by particles of fat which are surrounded by flour. During baking the fat melts and forms flakes. Rough handling causes the fat to melt before baking forming solid masses or toughness in the pie crust.

For making pie crust easier, use chilled ingredients, even the flour and most important use ice water. Sift the flour and salt together; then add cold fat and cut in as quickly as possible with a pastry blender. Some who already know how to make a pie, use their fingers but they must work quickly as the heat from the fingers will cause the fat to melt. The blending is complete when the largest pieces of fat are the size of small peas.

The greatest obstacle to overcome when learning how to make pie crust is adding just the right amount of water. The amount of water needed depends on the types of shortening used and the dryness of the flour. It usually takes about 2 to 4 tablespoons for each cup of flour. Start by sprinkling ice water over the flour mixture and toss quickly and lightly with a fork to distribute the water; avoid stirring or mixing. Too much moisture will make the crust hard and brittle. Too little water makes a crust which cracks at the edges while being rolled. It could also crack open while baking and make serving a problem. 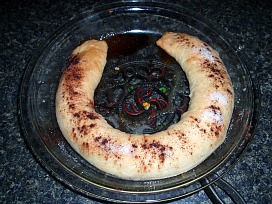 If learning how to make a pie, when dough is moist enough to hold together with a little pressure, it is time to roll out for pie plate. Excess flour on the board or pin will make the crust hard. Many use a canvas to roll their crust or a cover for the rolling pin to prevent the dough from sticking rather than using much flour. I have always just used a board and floured lightly and worked quickly; I have never had a problem with inferior pie crust. Roll the bottom pie crust to 1/8 inch thickness and the top layer a little thinner. NOTE: I personally like a little thicker bottom crust (1/4 Inch) especially for my meringue pies. I bake and cool them before adding the filling and I like the flakiness of thicker pie crust.)

If learning how to make a pie a good technique to follow when rolling pie dough, start each stroke at the center of the dough and roll to the edge. Keep pastry as circular as possible and keep the same thickness on the edges as in the center. The circular dough needs to be larger than the pie plate to allow for lining the sides and for crimping around the edges. Roll and turn pastry often to make sure it is not sticking to the board. Check the rolling pin often to make sure nothing is sticking to it which will make indentations in the pastry.

HOW TO MAKE A PIE CRUST RECIPE

The following is my favorite pie crust recipe. It is called “never fail” and that it is.

(Makes 5 shells- I will make all 5, wrap in plastic wrap and freeze. Unbaked, the pie plates stack nicely.)

Preheat oven to 350 degrees. Very lightly grease bottom of pie plates (not sides) with a fork, place holes all over dough, bottom and sides. (This keeps dough from bubbling up while baking) Next, mix 1 egg white with a little water and beat with a whisk. With a pastry brush, brush the entire pie shell. (This will seal the crust as it bakes, and the filling will not make the crust soggy.)

If you are learning how to make a pie for a cream filling like a meringue pie recipe, you will need only a baked bottom crust. Lightly grease the bottom of a pie plate. (NOTE: Always check oven baking temperature before preparing the pie plate. Often the recipe calls for temperatures too high for glass pie plates so metal ones must be used. Be careful with temperatures above 400F degrees.)

After rolling the pastry dough, fold in half and lift into a pie plate and unfold to cover plate; do not stretch the dough. After fitting the crust, trim the dough leaving 1 inch hanging around the rim. Fold the dough under and back to make an airtight rim. Then with the thumb and index finger flute the edges. For cream pies, I always whip an egg white with a fork and brush it all over the bottom and sides of the pastry. This seals the pastry as it bakes and prevents the filling from making the crust soggy.

When learning how to make a pie, you should know there are several methods to let the steam escape and keep the pie crust from shrinking. I simply use a fork and prick holes all over the bottom and around the edges. Other people tell me they line the pastry with wax paper and then partially fill the shell with dry beans to weigh the crust down; after baking 10 minutes, they roll up and remove the beans and wax paper and then continue baking. Others say they fit another pie plate on top of the crust and bake 10 minutes; then remove before finishing the baking. My method has always worked well for me so that is what I would suggest if you are just learning how to make pie crust.

If making a double crust pie recipe, do not trim the bottom crust until you put the top crust over the filling. Trim both crusts together, leaving about ¼ inch extra around the rim; then crimp around the top. I usually beat a whole egg with a little water and brush all over the top to make a golden brown when baked. Depending on the type of pie, sometimes I will sprinkle coarse sugar over the top, or make a mixture of sugar and cinnamon to sprinkle; use your imagination.

When learning how to make a pie you need to know also with a double crust pie recipe you have to be concerned with the steam escaping; you need holes for this to happen. The simple way is to cut slits in the top crust with a sharp knife. Sometimes for a more presentable looking pie, I will use tiny cookie cutters and cut a few shapes in the top crust. If I feel a pie might be juicy like many fruit pies, I line the bottom oven shelf under the pie with aluminum foil or simply place a baking sheet under it just in case of a spill.

To me the pie filling is the easiest part of learning how to make a pie. A large part is a matter of personal taste; if you like the pie less sweet or sweeter. When you are new at pie baking, the best advice is to use recommended recipes. When making a filling for a two crust pie, take precautions against being too juicy. Use some form of thickening for fruit such as flour or cornstarch. As I mentioned above, the top crust should be well slashed to allow the steam to escape. I have read that some will insert 3 inch macaroni tubes to act as chimneys for the steam.

If you are learning how to make a pie, for fillings in cream pies, I strongly recommend using recipes already tried by someone you know. Follow the recipe carefully and use top quality ingredients. After gaining experience in pie making, then you might want to be adventuresome and try different things. Experience will give you knowledge of different ingredients and what works well together.

As I mentioned above, I would say that preparing the perfect meringue is the most difficult part of pie making. I have worked for many years to get a no weeping meringue with a good flavor and is presentable in appearance. The following recipe is the best.

Combine sugar, water and cornstarch in a saucepan. Cook over medium heat until slightly thickened but pourable. Beat egg whites and salt until foamy. Continue beating, while gradually pouring in hot mixture, Continue beating until peaks form. Spoon onto top of pie filling and spread with a spatula to the edges to seal. Bake in preheated oven at 350 degrees oven until lightly brown.