How to Make Soup

For you to know how to make soup, you must understand a little about the history of soup and something about the different types of these dishes. We often think of a steaming hot soup as the perfect food on a cold winter day; it certainly does tend to warm us up. Equally important is that a creamy cold soup on a hot summer day can work as a chiller. It is one of the most versatile dishes for a cook; whatever the occasion, there is a soup to fit the need. These recipes can be chowders, gumbos, or even simple broths; I include in my hearty soup recipes ones like bean and chili, although many people classify chili as a category by itself.

It is a cosmopolitan dish with a very long history. The history of soup reveals that many centuries ago peasants were living on one dish meals of meat and vegetables cooked together. Although this was the main course for the day, often meat was not available to add to the pot. Many vegetable soups were made without meat for seasoning and made strictly with whatever vegetables were left in the fields; it might be cabbage, pumpkin, broccoli, carrots, mushrooms, tomatoes, different squash or sometimes it might be a combination of vegetables. Gypsy cooks threw into the soup pot whatever the countryside had to offer. Resourceful wives, who knew how to make soup, of the fishermen made seafood chowders from the spare catch; also adding any other ingredients available for their home consumption.

How to Make Soup with Great Recipes 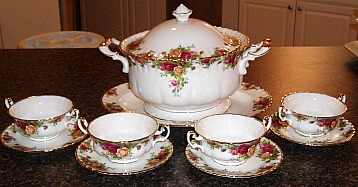 Today a pot of soup still depends on what is available and how you are planning to serve it. Soups are a great way to use up many of your leftovers. When you have any vegetable leftovers, potatoes, rice or meat, throw them in a bag or container in the freezer. Make a large pot of soup and add all the leftovers; this variety adds great flavor. Vary your soup ingredients with the seasons to take advantage of seasonal produce. Use your imagination and try substituting ingredients in the soup pot this is easier the more you learn how to make soup.

If you know how to make soup it is easy to multiply ingredients to feed a crowd like this cheeseburger recipe.

Cook ground beef and onions in a large pot: if needed add a little cooking oil to pot.

Bring to a boil and cook until vegetables are tender.

Heat while stirring until blended and hot.

Stir in cheese and sour cream; heat but do not boil.

If you know how to make soup, you will know that most soup recipes begin with some type of broth; maybe poultry, fish, meat or vegetables. Today many cooks start with commercial brands of soup broth but it is very simple to make it at home. Commercial brands of broth often have way too much salt in them so this is something you need to keep in mind if using them. Many recipes of the following groups are made up of basically broth and are light enough to go with a main meal; sauerkraut soup, French onion, Chicken soup and Italian wedding soup.

Place leeks in pot and cover with water; add 1 teaspoon salt and cook until tender.

Drain leeks and reserve 2 cups of the hot water; set leek aside.

Melt butter in pot and stir in flour and milk; cook over medium while stirring until thickened.

Add the bouillon cube, the reserved water and bring to a boil; add the drained leeks.

Season to taste with salt and pepper.

Thin clear soups were devised to precede formal dinners to curb the appetite. They have come into common use only with the wider extension of luxuries of modern times. Since the purpose is different, these soups will never replace the hearty chowders, stew and soups of substance. Cold soups like a vichyssoise recipe, are also for the most of us foreign novelties. Such soups like the cold fruit ones are too much like a dessert to win popularity as a soup.

Put all ingredients in a large soup pot; cover with water and bring to a boil.

Simmer until all the vegetables are tender. 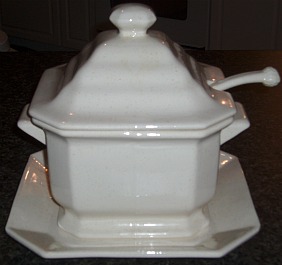 Whether a thick hearty soup or a thin clear soup, each in its own place can make for a beautiful presentation. Use your imagination in selecting serving containers for soup this becomes easier once you know how to make soup. Match the container with the soup. I believe this is going to once again become important. With the return of cooking at home instead of eating out, we will want to enjoy a nice presentation of our food. Nothing is worse than spending time preparing food than to have the family turn their nose up at it. A pretty presentation will make them forget if it is something of which they are not particularly fond.

The soup tureen has as much mystique and history as the food itself. It has always provided an eloquent way of serving soups and stews. We have gotten away from using this item in our modern days. Instead in our fast world, we have mostly chosen to scoop a bowl of soup from the soup pot on the stove. I do believe that our busy life must slow down therefore we will begin to enjoy these luxury items more. Years ago, people who really knew how to make soup, would fill a soup tureen that was placed on the table for lunch. A homemade loaf of bread was added and maybe some type of bread spread and this was the meal. Whoever did the cooking would sit down with the rest of the family and serve the soup at the table. This was a much better meal environment.

When learning how to make soup, tureens were also very important when serving a buffet. Quite often two or three were placed on a single buffet, each reflecting the contents inside as closely as possible; for instance a lobster bisque might be presented in a tureen with fish either painted or imprinted on the outside. Single containers which usually matched were placed along side of the large soup tureens on the buffets. These beautiful dishes certainly add to the presentation. Many times these beautiful dishes can be purchased at yard sales for only a few dollars because no one is yet interested in using them.

To know how to make soup means knowing how to make garnishes to serve it. Garnishes for soups also add to the presentation. Many vegetable garnishes, croutons and nuts are served with soups. For clear soups, try a thin slice of lemon sprinkled with chopped parsley; thin slices of mushrooms, thin slices or slivers of cucumbers, carrots, olives or nuts. Just remember for light soups keep the garnishes light.

For heavier soups such as cream of potato and cheese soup garnish with croutons, couple small dumplings, bacon pieces or grated cheese. Heavier soups like some heavier potato soups with meat, lentil soup, pasta fagioli and split pea soup can take heavier garnishes. These are important tips to know when learning how to make soup and the best way of serving them.