How to Make Apple Cider Recipes

When I learned how to make apple cider recipes I learned these can be usually substituted with apple juice; it just depends on your taste buds. For me, I have never particularly cared for the juice but I have always loved the flavor of good apple cider. So apple cider vs apple juice; what is the difference? Just what is apple cider?

There seems to be many opinions and in some countries different regulations and opinions about apple cider vs apple juice. Some people see no difference in the two at all. Being from a popular apple growing area is why I prefer to drink apple cider over apple juice; this is the fresh apple cider which has not been heavily processed.

The juice is processed by heat and filtered until all fiber from the apples is removed leaving it very clear which also removes much of the flavor. Fresh apple cider is wonderfully delicious and since it is not processed as it ages it will start fermenting. It should be brown with a strong apple flavor having much of the apple pulp still in the jug.

Stir together in a saucepan the sugar And water; heat and stir until the sugar dissolves.

Reduce heat to low and add the cinnamon sticks; simmer and reduce liquid for 30 minutes.

Strain and store in a jar with lid; use as needed.

Heat apple juice in a crock pot or saucepan.

Stir in the cinnamon syrup and heat to desired temperature.

Ladle into mugs, top with whipped cream and drizzle with caramel sauce. 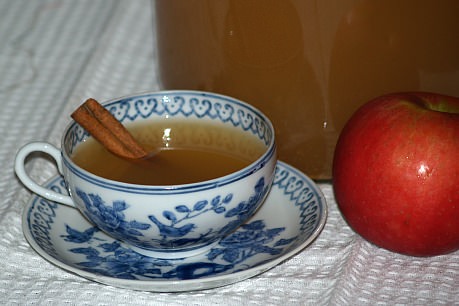 How to Make Apple Cider Recipes

I learned how to make this apple cider recipe; it is great to serve in the winter especially for the holidays. It is so flavorful with the spices and orange juice.

Boil the sugar and water for 10 minutes.

Strain and then add the orange juice, apple cider and lemon juice.

Bring just to a boil and then serve in mugs.

Combine the milk, cider, sugar, eggs, cinnamon and the 1/8 teaspoon nutmeg in a medium saucepan and stir well to blend.

Cook over medium heat until the temperature reaches 160F degrees. DO NOT BOIL.

Pour mixture into mugs, top with dollop of whipped cream and sprinkle with ground nutmeg.

Combine all ingredients in a large pot; Bring to a boil and simmer for 15 minutes. Serve in mugs.

Mix all ingredients and store in an air tight jar.

Using the scoop in the apple cider mix, use 2 to 3 scoops per cup of hot water.

Place all ingredients in a blender, cover and blend for about 30 seconds.

Some of the apple cider recipes use more than spices to “spice up the drink”. Different alcoholic beverages added to the apples, apple cider or apple juice makes great adult drinks.

Combine the apples, cinnamon and 2 tablespoons water in a saucepan; simmer covered 5 to 10 minutes.

Stir in the sugar and stir just until dissolved.

Remove from heat and cool.

Combine the apple mixture, wine and brandy; pour into a 2 quart glass jar with lid.

To serve strain into liqueur glasses.

NOTE: People here in Tennessee tell me this is very good in the winter and extremely good for colds.

Boil 2 quarts of the apple juice with the spices for 5 minutes.

Add the sugar and the sliced lemon and boil 1 minute; cool.

Add the whiskey and brandy to strained mixture.

To serve just heat DO NOT BOIL.

Combine all ingredients except the tonic water in a large glass jar or pitcher; Stir to dissolve the sugar.

Refrigerate for 4 hours to mellow.

Combine the ginger ale and apple juice or cider; place scoop of ice cream in glass and pour juice mixture over filling the glass.