In my lifetime and my personal life as a young homemaker, most women around did not work. They stayed at home to raise their children and take care of the household. Maybe once a week the women with their children would gather at another house and have coffee along with “coffee cake”. Sometimes a neighbor or friend would stop by each other’s house to have a cup of coffee and a piece of cake.

One job of the woman of the house was to make every visitor feel welcome in their home; being hospitable. What is hospitality in the home? In my day it was only hospitable to have something to offer a guest with their coffee. I believe that this is the reason coffee cakes became so important to my earlier generations of homemakers. Of course here in the United States apples have been one of the abundant and affordable fruits, often growing in our back yards.

Enjoy the many recipes of apples like apple bread, apple dumplings and apple salad.

When I learned how to make apple coffee cake recipes, at first I started with a prepared mix like this apple crunch coffee cake. This quick bread recipe is easy to prepare and very delicious.

Combine the bread mix, whipping cream and egg in a large bowl; stir until mix is moistened.

Spread half of batter in the bottom of prepared pan.

Top batter evenly with the apples.

Combine the brown sugar, pecans and cinnamon in a small bowl and mix well; sprinkle half of mix over the apples.

Drizzle 2 tablespoons of the butter over the brown sugar mixture.

Sprinkle with remaining nut mixture and drizzle remaining butter over the top.

I love good coffee cakes but they are especially good when sour cream is added like in this recipe. 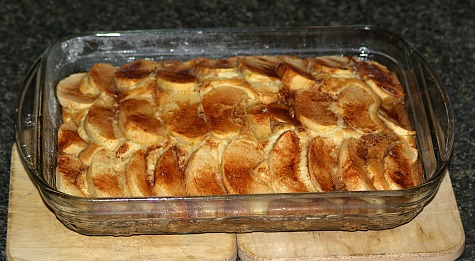 Cream sugar and butter together in a mixing bowl; beat in sour cream egg and vanilla.

Arrange apple slices on top of batter; sprinkle with mixed ½ teaspoon cinnamon and 2 tablespoons sugar and dot with extra butter. 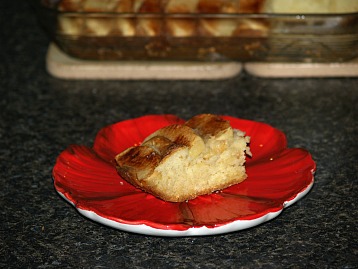 Cream ¼ cup of the butter, egg and milk; Mix in 1 cup flour and baking powder.

Stand apple slices closely together in the dough. Sprinkle the gelatin all over the top.

Combine the other 1 cup flour, sugar and other ½ cup butter; cut with pastry cutter until crumbly and sprinkle over all.

Another short cut to making coffee cakes is by using products like ready to bake biscuits; this biscuit breakfast recipe is very delicious and will be much appreciated for breakfast or brunch.

Melt 2 tablespoons butter in a 9 inch cake pan; arrange sliced apples over the butter.
Sprinkle the raisins over the apples.
Cut each biscuit into four pieces and place over the apples.
Mix together the brown sugar, cinnamon, corn syrup and egg until well blended; pour over the biscuits.
Sprinkle walnuts over the top; dot with 1 tablespoon butter.
Bake in preheated oven at 350F degrees for 35 to 45 minutes.
Invert on serving plate and spoon juice over the top.