How to Make Apple Strudel Recipes

Strudels are dough filled with apple fillings or other fillings. The dough is wrapped around the filling in a long roll and often has to be laid in a circle on a tray to bake. If you learn how to make the old fashioned dough for apple strudel recipes, it is thin, elastic and made with no leavening in it. It is kneaded and after resting the dough it is rolled thin similar to phyllo dough. The dough can be very time consuming but the outcome is worth the effort. This is why commercially frozen phyllo is often substituted rather than making it homemade. 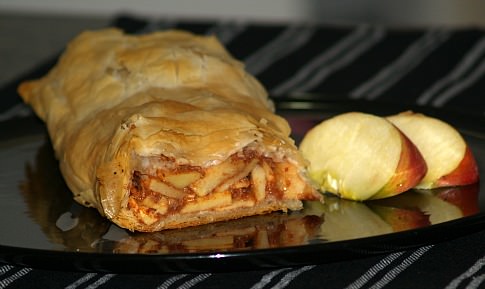 How to Make Apple Strudel Recipes

When you learn how to make apple strudel recipes, much importance is placed on the dough but also the combination of ingredients that they include in the filling recipe. These fillings can be just sliced apples with sugar and cinnamon or the mixture can include nuts, raisins, dates, coconut, cheese or numerous other ingredients.

NOTE: If you like purchase frozen phyllo dough and use any of the following fillings instead of

HOW TO MAKE APPLE STRUDEL RECIPE 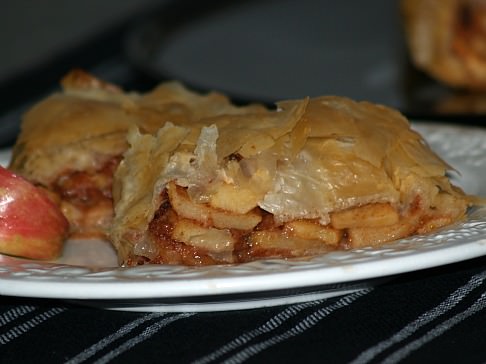 Apple Strudel made with Phyllo Pastry

Each strudel takes 4 sheets of phyllo dough. (I prefer to use 7-8 sheets of the phyllo pastry)

Brush butter on each sheet and stack on top of each other.

Place one bowl of the apple mixture on the short end of the phyllo dough; roll up like a burrito tucking sides in. Brush top with butter; REPEAT PROCESS FOR OTHER FOUR STRUDELS.

NOTE: These can be frozen and then bake for 1 hour.

Place flour in a bowl.

Place egg white in a cup and add enough water to make ½ cup.

Pour egg white mixture over the flour: and add the salt, oil, and stir until a ball forms.

Hold dough high above a floured countertop and hit the dough hard against the counter at least 20 times or until the dough is smooth and elastic.

Place dough in a bowl and brush the top lightly with lukewarm water.

Cover and let it rest in a warm place for ½ hour.

Melt 2 tablespoons of the butter, add the breadcrumbs and stir until mixed; set aside.

Peel and core apples and cut into thin slices; sprinkle with lemon juice.

Add the cinnamon, sugar, almonds and raisins; mix well and set aside.

Place a clean dish towel 25” x 15” on the counter and sprinkle liberally with flour.

Place the dough on top and roll it out on the towel.

Spread breadcrumbs on the dough leaving a 1 inch border around the outside.

Place the apple mixture in a 2 inch strip the long length of the dough.

Roll the dough over the apple strip (use towel to assist) and tuck in the ends.

Repeat laying the apples and continue folding and rolling the dough until the strudel if formed.

Place the strudel on a greased baking sheet with the seam down.

Melt remaining butter and brush all over the roll.

Bake for 35 to 45 minutes or until lightly brown.Place on rack to cool and sift powdered sugar over it.

Sift together flour, baking powder and salt into bowl; add egg and ¼ cup melted butter.
Blend ice water into flour and egg mixture; knead on floured surface to a smooth ball.
Cover with towel and let rest ½ hour.
Sauté crumbs in 2 tablespoons butter until lightly toasted; add nuts and set aside.
Cut apples into wedges and then slice thinly crosswise.
Mix dates, sugar, lemon juice and cinnamon with apples.
Roll dough on floured surface to a 24 X 16 inch rectangle; brush with 2 tablespoons melted butter.
Sprinkle with crumb mixture to within 1 inch of edges; spread evenly with apple mixture.
Begin rolling from long side as for a jelly roll and seal ends.
Shape like a horseshoe and place seam side down on greased baking sheet.
Melt ¼ cup butter and brush on strudel; bake in preheated oven at 400F degrees for 40 minutes.
Brush occasionally with melted butter; serve warm in slices.