How to Make Artichoke Recipes for Appetizers

Those of you who have not learned how to make artichoke recipes for appetizers are really missing out. I was one who never used artichokes for years; now I am addicted to them. Some of the artichoke appetizer recipes are my favorite of all appetizers. The artichoke cheese dips is among my make ahead appetizers these recipes can be prepared at least a day or two ahead of time. If I will be serving a large crowd I always make more then one appetizer with these artichoke appetizers I might serve a ceviche or shrimp appetizer as well.

I am not sure where artichokes originated; I am thinking in Italy. They are very much a part of the Italian recipes. We never grew them in Ohio so I guess that is why I never made recipes with them. They are grown in some parts of the US where the weather is warm and the soil is fertile. The first step in learning how to cook artichokes is in the preparation. In the US the globe artichoke is most frequently cooked by removing most of the stem and part of the scale with scissors. This process removes the thorns and makes them easier to handle. Then the artichokes are steamed or boiled and made ready for the artichoke recipes.

Learn how to make this is a very easy artichoke recipe.

Combine and stir together all ingredients in a medium bowl. Turn mixture into a light oiled soufflé dish or 1 ½ quart casserole baking dish. Bake for 25 to 30 minutes or until golden brown on top. Serve with appetizer crackers or small toasted bread.

Slice through bread horizontally; scoop out center from the bread.

Place butter, sesame seeds and garlic in a skillet.

Sauté pieces of bread in the butter mixture.

Scoop mixture into the bread shell.

To serve slice bread with a bread knife on an angle.

Sauté shallots, garlic and chives in butter over medium heat until soft; place in mixing bowl.
Add artichokes, bacon, basil, Parmesan cheese and Jarlsburg cheese; toss to combine.
Stir in mayonnaise, lemon juice, sugar, salt and black pepper; mix well and chill.
Remove stems and seeds from peppers; cut into 2 inch squares and place in single layer in baking pan.
Drizzle oil and vinegar on pepper pieces; season with salt and black pepper.
Bake at 350F degrees for 15 minutes stirring after 7 minutes; remove from heat and let stand until cool.
Spoon mounds of artichoke mixture on each piece of pepper; broil until puffed and bubbly.
Let stand until warm; makes 40. 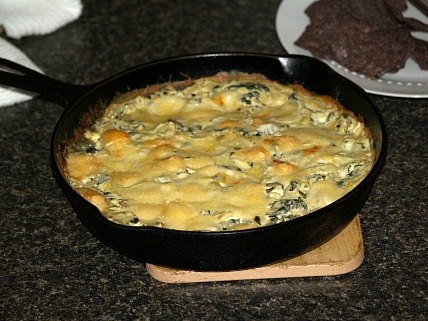 Learn How to Make this Spinach Artichoke Recipe

Preheat oven to 400F degrees.
In large iron skillet or baking pan, sauté onion in melted butter until tender.
Add chopped spinach to skillet and sauté until tender; stir in chopped artichokes.
Add sour cream and cream cheese and stir until smooth.
Stir in salt, pepper, red pepper and garlic.
Combine in bowl the three cheeses; stir half of the cheeses into the hot spinach mixture.
Spread remaining cheeses over the top; place in hot oven until bubbly about 15 minutes.
Serve with chips. 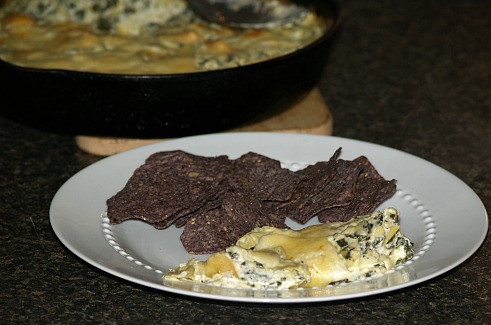