How to Make Beef Stroganoff Recipe

I learned how to make a beef stroganoff recipe many years ago. When I did, I also learned that this was originally a Russian recipe. Since the creation, it has become a popular dish in many other parts of the world. Even here in the United States, there are many different versions of the recipe.

True beef stroganoffs have one common ingredient in them, besides the beef, and that is sour cream. Here in the United States, I know these recipes to be called by different names. Some call this dish simply ground beef and noodles or beef and noodles. Many cooks, like me, will add sour cream to recipes which do not really need it. I love sour cream and I feel it changes some ‘tiring” recipes into special ones giving it a delicious flavor.

As I have mentioned so many times, sour cream is one of my favorite ingredients to use in entrées, soups, appetizers and desserts. When you learn how to make a beef stroganoff recipe, you will love the rich delicious sauce. This sauce is mainly due to the addition of sour cream and is so tasty when serving over noodles. (It is good over cooked rice also).

Sometimes you will find newer versions of the beef stroganoff recipe. In some of these, they will instruct you to replace the sour cream with yogurt. Although I do use yogurt in a lot of my cooking, I do not feel it gives the same rich flavor in beef stroganoff like sour cream.

HOW TO MAKE BEEF STROGANOFF RECIPE

Trim fat from beef and partially freeze for easier cutting.

Slice beef across the grain into thin bite size strips.

Combine sour cream, flour and tomato paste in a small bowl; stir in water, bouillon granules and pepper and set aside.

Cook fettuccini according to package directions (omit any salt and oil if in directions); drain well.

Add beef to hot skillet and stir fry for 2 to 3 minutes to desired doneness.

Add sour cream mixture to skillet; cook and stir over medium heat until thickened and bubbly.

Add meat back into skillet and cook stirring for 2 more minutes. 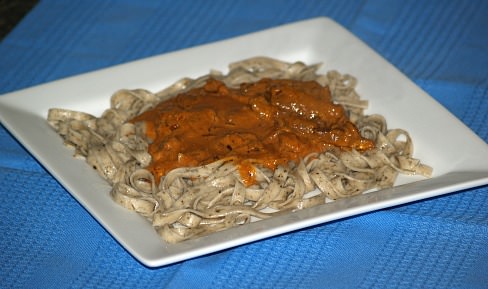 How to Make Beef Stroganoff with Noodles or Rice

This recipe is a little different by adding the flavors of sherry and oregano, but also very good.

Sprinkle meat with salt and pepper.

In a large skillet sauté onion and garlic in butter until golden brown.

Add meat to very hot skillet and cook until brown; sprinkle with flour and paprika.

Cover and cook on low heat 40 minutes or until meat is tender.

Stir in sour cream and cook 10 minutes; serve over noodles or rice.

This is a hamburger stroganoff recipe or some might call ground beef and noodles. Whatever you choose for a name, it is still very flavorful and delicious even though it is made cheaper with hamburger.

Cook noodles according to package instructions.

Melt butter in large skillet; sauté onions, garlic and mushrooms about 5 minutes in the hot butter.

Add meat and cook stirring until beef is brown.

In a greased casserole baking dish, layer 1/3 of noodles, then 1/3 of meat mixture; repeat 2 more times.

This is one of the recipes which uses yogurt in place of sour cream. Like I said I love the flavor added by sour cream but you may prefer this recipe; also very good.

Cook until beef is done and remove from skillet.

Add ¼ cup broth and onions to skillet; cook until onions are tender.

Remove cover and cook until all liquid is absorbed.

Add wine to skillet, bring to boil, and then reduce heat to simmer.

Mix cornstarch to remainder of broth and add to skillet; stir until thickened.

Add beef, salt and pepper and heat until bubbly.

Remove skillet from heat and stir in yogurt.

Learn how to make beef stroganoff recipe in a casserole.

In small saucepan combine soup and sour cream; heat to a boil and pour over casserole.

Separate biscuit dough into 10 biscuits; cut each in half forming 20 half circles.

Arrange half circles cut side down in a circle around the casserole; sprinkle reserved onions between biscuits.

Combine topping ingredients and pour over the biscuits; bake 25 to 30 minutes or until golden brown. Serves 4-5

Simmer mixture until the beef is tender.

Five minutes before serving add sour cream; heat thoroughly but DO NOT boil.