Learn how to make the Boston cream pie recipe and how this popular dessert got its start. Its fame is claimed by the Parker House Hotel in Boston back in the 1800’s and is now the official desert for Massachusetts. (This same hotel also claims the fame of the soft buttery Parker House rolls, also in the 1800’s.) Both of these recipes remain to be very famous still today. Those must have been some years for this hotel!

The original recipe called the “Parker House chocolate cream pie’ was created by an Armenian French chef.  It consisted of two layers of sponge cake which was then filled with cream.  The sides were brushed with a rum syrup and then coated with the cream; on top of the cream sliced almonds were placed all over the sides. Finally the top was coated with chocolate fondant or glaze. See why this became so famous!

As you are learning how to make Boston cream pie recipe you will find a variety of recipes all with the same title. I am sharing several with you which I have collected over the years; some are not much like the original recipe. The one question I have always asked is why this is called a “pie” and not a “cake”. It has all the characteristics of a cake.

Finally after I moved to Florida in the eighties, I worked with so many people from other countries. Many of them would get the words “pie” and “cake” confused.  I am thinking because the creator of the original Boston cream pie recipe (and creator of the name) was from another country, he simply assumed it was a pie. I do not know this for a fact but I certainly would call it a cake.

NOTE: As I learned how to make the Boston cream pie recipe I found it best to refrigerate “step to step” as much as possible; for instance, refrigerate after filling while melting the chocolate. Cakes also need to be refrigerated a couple of hours before cutting and should always be kept refrigerated.

NOTE: To melt chocolate I bring the water in the bottom of a double boiler just to a boil; place the top pan on top with chocolate and set it OFF the heat so it can slowly melt.

HOW TO MAKE THE ORIGINAL BOSTON CREAM PIE RECIPE 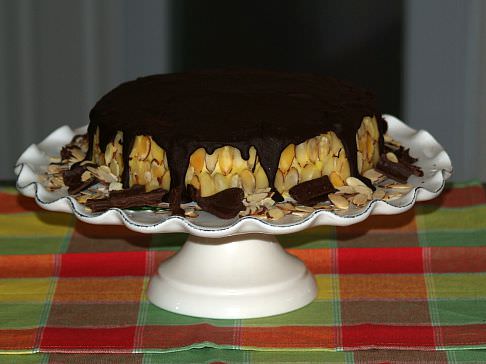 How to Make the Original Boston Cream Pie Recipe

Combine sifted flour, baking powder and salt; sift together 3 times and set aside.

Cream butter and sugar together until creamy; beat in the eggs and vanilla until light and fluffy.

Gradually add flour mixture to the creamed mixture alternately with the milk; beat until smooth.

Cool 5 minutes and remove cakes from pans to rack to cool.

When cake is cold place one layer on a cake platter.

Top first layer with 2/3 of custard filling; place other layer on top.

Brush sides and top of cake with rum glaze. (I actually drizzle rum glaze over the top).

Spread chocolate over the top and let it run (Somewhat) down the sides.

Warm cream and half of the milk over medium heat in a heavy saucepan.

When it begins to bubble around the edges add the sugar and salt; stir until sugar dissolves.

Remove pan from heat and cover to keep warm.

Add remaining milk to the cornstarch gradually while stirring until smooth.

Whisk the eggs into the cornstarch mixture.

Slowly pour the cornstarch mixture into the saucepan while briskly whisking.

Cook and stir mixture over low heat until it thickens and is smooth.

As soon as mixture thickens remove from the heat; let custard set to room temperature.

NOTE: This is a small recipe but I always have some left over. It is so delicious that you can use the leftover glaze on ice cream or other desserts.

Melt butter in sauce pan; stir in water and sugar.

Boil 5 minutes; stir in rum and remove from heat.

Melt chocolate and butter in double boiler over hot water (Not boiling water). 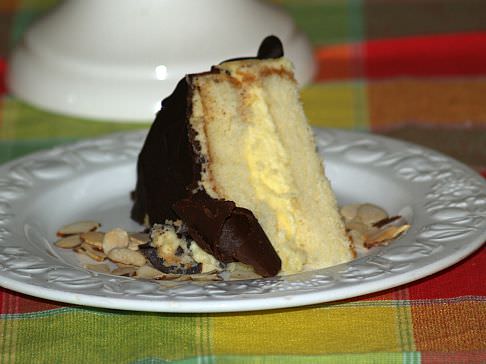 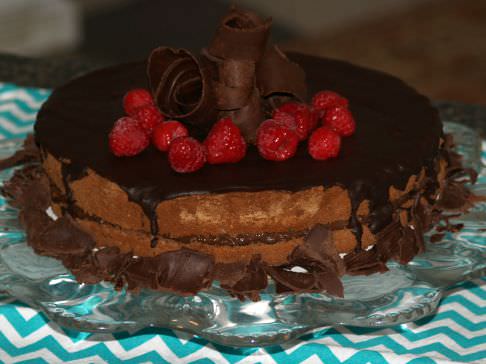 Sift together sifted flour and cocoa powder; set aside.

Gradually add 1/3 cup of sugar to whites and beat until stiff peaks form; set aside.

Beat egg yolks in a large mixing bowl on HIGH speed until thickened.

Beating on LOW speed gradually add 2/3 cup of sugar to the yolks.

Bake for 45 to 50 minutes or until top springs back when touched.

Remove cake from pan and split into 2 layers.

Place one layer on cake plate and spread with chocolate custard.

Top with remaining layer and spread chocolate glaze over the top and sides.

Combine sugar and cornstarch in a heavy saucepan; stir in milk and chocolate.

Remove from heat and stir 1 cup of the hot mixture into yolks; return mixture to saucepan.

Melt chocolate and butter in small saucepan; remove from heat.

Stir in powdered sugar and vanilla; gradually stir in water until glaze is thin spreading consistency 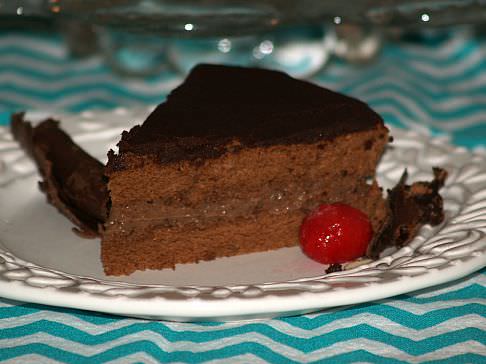 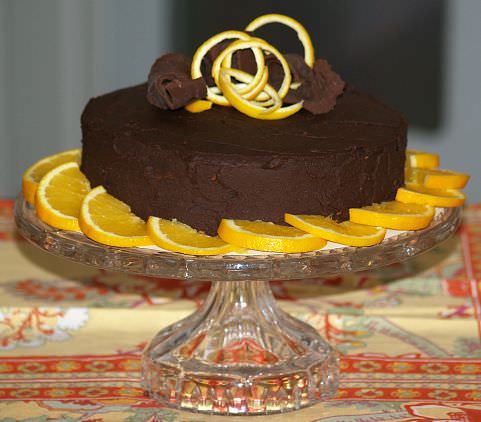 Sift together the cake flour, baking powder and salt.

In a large mixing bowl cream butter and sugar; beat in eggs one at a time and vanilla.

Add dry ingredients to the creamed mixture alternating with the milk.

Bake cakes for 20 minutes or until pick comes out clean.

Cool cakes in the pans for 10 minutes; turn out on wire rack to cool completely.

Make the custard filling; spread over one cake layer and top with second layer.

Scald cream in a small saucepan; set aside.

In a medium bowl combine sugar, flour and salt; pour in the hot cream mixture and stir until smooth.

In top of double boiler beat the eggs together.

Remove from heat and stir in the orange peel and extract; cool and then cover and refrigerate.

Melt chocolate over hot water (NOT boiling) in double boiler; remove from heat and cool slightly.

Cream butter and orange extract in a medium bowl; beat in brown sugar a little at a time.

Beat melted chocolate and cream into the butter sugar mixture.

Beat until frosting is stiff enough to spread.

Chill until ready to serve; store in refrigerator. 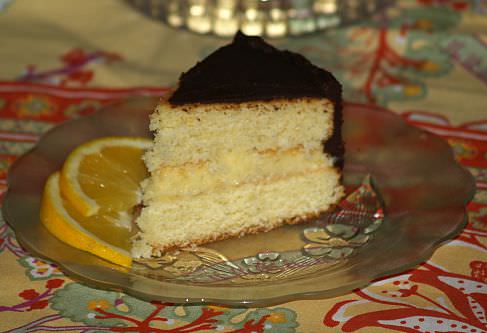 Beat egg whites until stiff; gradually beat in half of the sugar 2 tablespoons at a time.

Bake 30 to 35 minutes; set on rack in pan to cool completely.

Remove from pan and carefully slice cake in half with a sharp knife.

Fill cake with cream filling and frost with glossy frosting.

Combine sugar, flour and salt in the top of a double boiler; gradually stir in milk.

Stir a little of the hot mixture into the beaten yolks; slowly stir back into hot mixture.

Add hot water to the sugar to make spreading consistency; beat in chocolate and vanilla.

Spread over top of cake and let run down sides.

OPTIONAL: Often dusted powdered sugar would be a substitute for chocolate glaze.