How to Make Bundt Cake Recipes

Before I learned how to make bundt cake recipes, I thought there were specific recipes for this shape.  I found these are not special recipes but ones which have been baked in a Bundt cake pan. The “Bundt” name was made popular here in the United States by the Nordic Ware Company in the 1950’s to 1960’s. It is a simple ring pan leaving a neat design in the top of the cake after baking. Because of the prettiness of the cake they are suitable for any elegant coffee, tea or other gathering.

As unbelievable as it might sound, the Bunt cake pan was almost discontinued due to poor sales. As a result of Pillsbury Bake Off in 1966, sales of this pan soared. The Tunnel of Fudge Cake baked in a Bundt cake pan (baked by Ella Helfrich) took second place in the cook off. More than 200,000 requests were received at Pillsbury for this special pan. Of course no more thought was given to discontinuing the Bundt pan. More than sixty million of these pans have been sold in North America. 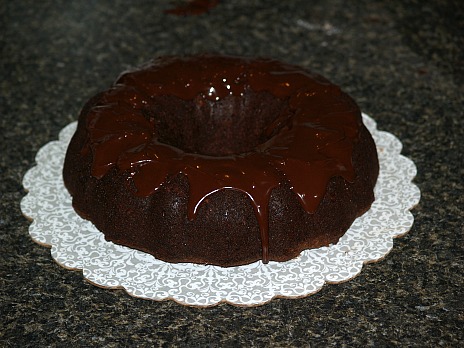 How to Make a Tunnel of Fudge Cake Recipe

HOW TO MAKE A TUNNEL OF FUDGE CAKE RECIPE

Combine sifted flour, powdered sugar and cocoa powder.
Sift dry ingredients all together; stir in walnuts and set aside
Cream butter gradually adding granulated sugar; beat in eggs one at a time.
STIR BY HAND with a spoon the dry ingredients into the creamed mixture.
Spoon mixture into a greased Bundt cake pan.
Bake in a preheated oven at 350F degrees about 55 minutes
NOTE: You cannot test with a pick because the center is suppose to very moist after baking; top will feel set when touched.
Cool for 1 hour before removing from pan; top with frosting and cool completely before cutting.

Combine cocoa powder with powdered sugar and sit together
Beat in milk until desired consistency and drizzle on top of cake. 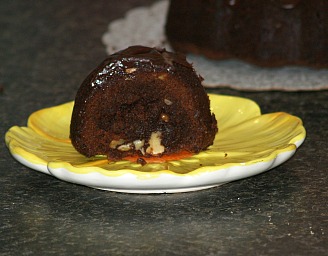 The tunnel of fudge cake is the most popular of all the Bundt cake recipes. It is so rich and delicious. Although I usually make it from scratch, the original Pillsbury Bake Off recipe (below) is very good.

Preheat oven to 350F degrees.
Cream butter in a large bowl on high speed; add eggs one at a time beating after each.
Gradually add in the sugar; continue beating on high until light and fluffy.
BY HAND stir in flour, frosting mix and walnuts until well blended.
Pour batter into a greased Bundt or 10 inch tube pan.
Bake for 60 to 65 minutes; cool 2 hours and remove from pan.
Cool completely before serving.

Cream oil and sugar together; add apple cider, eggs and vanilla.
Sift together flour, cinnamon, nutmeg, soda and salt.
Add the flour mixture to the creamed mixture and blend well.
Stir in the apples and walnuts; spoon into a greased Bundt or tube cake pan.
Bake in preheated oven at 350F degrees for 70 to 80 minutes or until pick comes out clean.
Cool, remove from pan and top with Cider sauce (below)

Combine cider, sugar and cornstarch in saucepan.
Bring to a boil and cook until slightly thickened about 1 minute.
Remove from heat; stir in vanilla and butter.
Cool to warm and spoon over the cake.

The Spirit of 76 bundt cake recipe reflects the high spirit in the attitude of the American people on July 4, 1776. This is the day when we declared our separation and independence from the Kingdom of Great Britain.

As Americans prepared for the great 100 year birthday, many important events were taking place in this country. On JAN 31 The United States ordered all Native Americans to move into reservations.  A G Bell & Elisha Gray applied separately on FEBRUARY 14 for telephone patents. The Supreme Court ruled that Bell was the rightful inventor.  On MARCH 7 Alexander Graham Bell received his patent and on MARCH 10 the first telephone call was made.

The famous Johns Hopkins University opened on FEBRUARY 22, 1876. The second Kentucky Derby was held on MAY 15 and the Fourth Preakness on MAY 25. JUNE 4 was an important date because the first Transcontinental Railroad arrived in San Francisco, only 83 hours and 39 minutes after having left New York City. Speaking of California, on JUNE 14 the California Street Cable Car got its franchise.

On JUNE 5 at the Centennial Exposition, the BANANA was introduced to the American society. It quickly soared to one of the favorite fruits here in this country. The now famous Battle of the Little Bighorn took place on JUNE 25 wiping out the 7th Calvary and killing George Custer.

Thomas Edison received a patent for the mimeograph on AUGUST 8. The United States removed the Indians from the Black Hills on AUGUST 15 after gold was discovered there. On OCTOBER 26 Federal troops were ordered to South Carolina due to a continual problem with race riots. As you can see with these few events, much was going on during 1876.

This Spirit of 76 bundt cake recipe came from the celebrations of 1976; I am not sure of its creator but notice it contains BANANAS.  I was in Ohio for all the celebrations. The spirit of the American people was at an all time high. Everything was painted “Red, White and Blue” for this special occasion; even all the fire hydrants, roof tops and barns. This celebration went on for most of the year. Everyone designed homemade red, white and blue costumes to wear throughout the year. In my opinion, this was at the end of the grandest time of America.

This cake recipe was originally baked in a large tube pan but I often make it in Bundt pans. It symbolizes the simplicity of the by-gone years by the simple ease of mixing and baking.

Mix all ingredients together by hand with a spoon; beat 2 minutes.
Pour into a well greased large tube pan; bake at 350F degrees for about 90 minutes.
If desired frost with cream cheese frosting below.