How to Make Cake Roll Recipes

When I first thought about learning how to make jelly cake roll recipes they were made in the neighboring town when I was a child. At that time, it was the only bakery within many miles. The selections were very slim but everything was so very delicious; much better than what can be purchased today. It was only about once or twice a year that we would go down to this bakery; even then we could only purchase one item.

I was always so fascinated with learning how to make jelly roll cake recipes. The pretty red jelly swirled around in the sponge cake seemed to get my attention. At my young age this cake was so special and I thought it was just like a miracle which was only at this special bakery. I never dreamed one day I would be making this beautiful cake in my kitchen and it is so easy.

The first area that learned how to make jelly roll cake recipes seem to have been in Central Europe. Perhaps it is my deep roots from Germany that made me take to these cake roll recipes so early in my life. One of the first references to this type of cake in the United States comes from a journal published in Utica, New York in the eighteen hundreds. Many other countries have their own rolled cakes; India calls them jam cakes, Latin America fills them with guava jam and they call them brazo de reinas or in the Philippines, it is called pianono

Many things have changed since those early years when I first tasted  a jelly roll cake recipes. Today there are numerous cake roll recipes with all kinds of fillings. One of the most popular is the pumpkin recipe. The flavorful pumpkin spice cake filled with a luscious cream cheese filling makes a fabulous dessert.

Beat eggs on high speed for 5 minutes; gradually add sugar.
Stir pumpkin and lemon juice into egg mixture; set aside.
Stir together in another bowl the flour, baking powder, cinnamon, ginger, salt and nutmeg.
Fold flour and spice mixture into pumpkin mixture.
Grease and flour jelly roll pan or one inch deep cookie baking tray.
Spread cake mixture evenly in pan; sprinkle top with walnuts.
Bake in preheated oven at 375F degrees for 15 minutes.
Dust a clean kitchen towel with powdered sugar.
Loosen around the edges of the hot cake with a knife; turn out onto dusted kitchen towel.
Starting at short end roll hot cake up in the towel.
Set rolled cake on rack to cool completely.
Combine all the filling ingredients together and beat until smooth.
Unroll cooled cake and spread with the filling; reroll cake without towel, wrap in plastic wrap and chill.

Ice cream cakes have been around in Europe and other countries for many years. They might be under the titles of bombes, baked Alaska or other names. Here in the United States, retailers like Baskin-Robbins, Carvel, Friendly’s and Dairy Queen have made ice cream cakes a common term for families. So how about an ice cream cake roll recipe? To me the following recipe just sounded too good not to try; it surpassed all my expectations.

Grease and flour a 15X10X1 inch jelly roll pan
Sift together flour, cocoa powder, baking powder and salt in a bowl; set aside.
Beat egg yolks and vanilla in a small mixing bowl with an electric mixer on high speed for 5 minutes.
WASH BEATERS THOROUGHLY
Beat egg whites in a large mixing bowl on medium speed until soft peaks form.
Gradually add the ½ cup granulated sugar beating until stiff peaks form.
Fold egg yolk mixture into egg white mixture.
Sprinkle flour mixture over the egg mixture; fold in gently JUST until combined.
Spread batter evenly in prepared pan.
Bake in preheated oven at 375F degrees for 12 to 15 minutes or when top springs back when touched.
Immediately run knife around edges to loosen cake.
Turn hot cake out onto a clean kitchen towel dusted with powdered sugar.
Starting at the short end roll cake and towel up; cool on a rack.
Unroll cake and spread softened ice cream on the cake to 1 inch of edges.
Reroll cake without towel; wrap in plastic and freeze for at least four hours.
To serve drizzle raspberry sauce on plate; slice cake and place on each plate.
Garnish with fresh berries and mint leaves.

I love to make this cake roll recipe in the fall with freshly made apple butter.

CLICK  the play button above to watch me make a cake roll recipe. 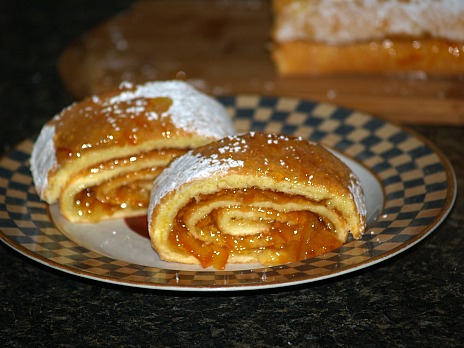 Sift together flour and salt; set aside.
Grease a 10X15X1 inch pan, line with wax paper, grease wax paper and sides, dust lightly with flour.
Beat egg yolks until slightly thickened; gradually add sugar beating until thick and lemon colored.
Add orange peel, juice and vanilla.
Add flour mixture and mix well; mixture will be thickened.
In another bowl beat egg whites on high speed until soft peaks form; fold into batter.
Spread batter into prepared pan.
Bake at 350F degrees for 12 to 15 minutes or until center springs back when touched.
Cool in pan only 5 minutes.
Turn cake out onto a kitchen towel dusted with 1 tablespoon powdered sugar.
Gently peel off wax paper; Roll up cake in the towel jelly roll style starting with short side.
Cool completely on wire rack.
Unroll cake, spread with orange marmalade over the cake to ½ inch of edges.
Roll up again REMOVING towel; cover with plastic wrap and refrigerate 1 hour.
Spread marmalade over the top; dust with powdered sugar; cut in 8 slices to serve.