How to Make Canned Ham Recipe

Have you ever learned how to make a canned ham recipe?

When I was a teenager I worked for a large supermarket called Woodys Supermarket. It was a wonderful place to work especially at holiday time. This was the popular place to be. Not only did everyone in the area come here to shop but many people drove from 100 miles away to shop here on occasion. 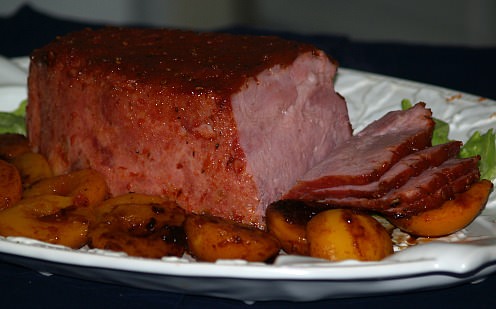 How to Make a Canned Ham Recipe

Woody was a man way beyond his time. He started out with a very small produce stand with the best produce people had ever seen in this area. Soon he built a building to house his produce and from this he started adding more items. Locals began doing their weekly shopping at his store. Eventually Woodys Supermarket housed a pharmacy, meat department, bakery and delicatessen (where the best canned ham recipe was made); then he started building up to make an upstairs. In the end, the store had the largest selection of grocery items you can imagine, a meat department like none other, a great bakery, delicatessen, pharmacy and total drug store.

If this wasn’t enough Woody added a restaurant upstairs where you could watch all the cake decorating and a book store. From upstairs you could walk across the highway and take an elevator down to a parking lot and to a huge party supply (called Little Farm) where all the soda drinks and alcohol was carried; also chips and snacks for parties. The store was open 24 hours a day, seven days a week. On top of all this Woody designed beautiful fountains throughout the store. Oh and I can’t forget that we didn’t have doors but air kept the cold out in winter and heat out in summer. What a place!

As I said, Woody was a man way beyond his years. No one had ever seen an establishment like this and until today, I have never seen anything like this in all the places I have been. I worked the checkout like many others (I remember about 12 to 14 checkouts). We sold so many groceries but if I would point out one item that I remember the most it would be the honey baked ham recipe. So many people like my family bought these canned hams; this is why I learned how to make a canned ham recipe. Who would think? 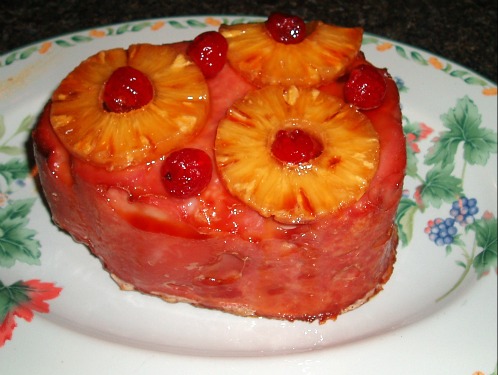 Canned Ham with Pineapple and Cherries

This canned ham recipe was sold in the delicatessen in either 5 pounds or 10 pounds. They smelled so good coming through the checkouts. If you walked past the delicatessen you could see a constant stream of them coming down in the food elevator to sell. They were beautiful decorated with sliced pineapple and red maraschino cherries on the top. Believe me the taste was even more delicious than the aroma and appearance.

Remove ham from can and place fat side up on a shallow pan.

Combine brown sugar and honey (If you do a large ham mix a little more).

Spread a little honey glaze over ham; arrange pineapple slices with cherries in the centers. (Hold in place with toothpicks)

Spread remaining glaze over the ham, pineapple slices and cherries. (The glaze helps to hold fruit in place)

Bake ham for 1 ¼ to 2 hours basting occasionally with drippings; check so it doesn’t get brown. 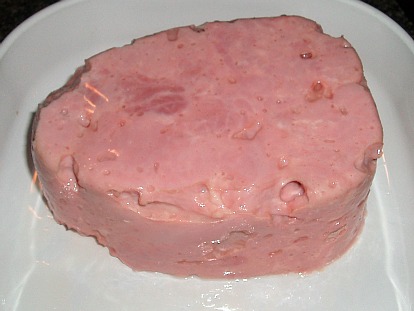 Ham Out of Can 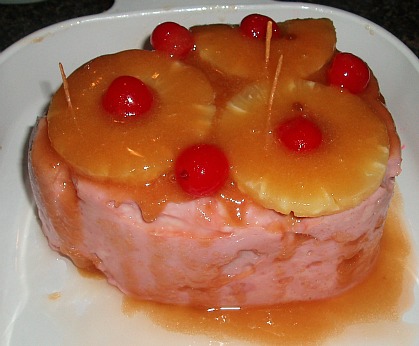 Remove ham from can and place on rack in an open roasting pan.

Spoon some of the sauce over the ham on a serving platter.

Serve remaining sauce in a small dish with the ham.

Sprinkle flour over liquid; stir in.

Bring mixture to a boil stirring constantly; simmer 2 to 3 minutes.

Stir in cherries and food coloring.

Lay a piece of foil over ham if edges start to burn.

This is a very tasty canned ham recipe.

Combine and blend remaining ingredients and pour over slices.

Cook slices over low coals about 15 minutes on each side brushing frequently.

This canned ham recipe can be used as an appetizer recipe.

To make sauce dissolve cornstarch in cold water in a saucepan; add remaining ingredients to saucepan.

Bring mixture to a boil and cook for several minutes.

NOTE: You can make a family size loaf; bake at 300 for 1 ½ to 2 hours basting occasionally.

Put rice in a saucepan; add the 2 cups water and salt.

Bring to a boil; reduce heat to low, cover and simmer until rice is tender and water has absorbed.

Remove rice from heat; melt butter in a large skillet.

Remove eggs from heat and transfer to a bowl breaking them up with a fork; set aside. 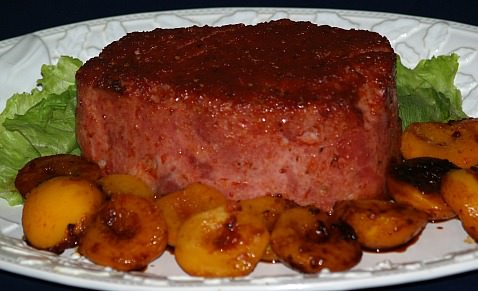 This delicious canned ham recipe and it makes a lovely presentation.

Bring mixture to a boil stirring occasionally; cook for 10 minutes and pour over the peaches.

Baste ham with liquid in peaches; place in oven and bake about 90 minutes basting every 15 minutes.

NOTE: Internal temperature should reach 140F degrees. (I leave it in almost 2 hours).

Serve this canned ham recipe on a platter with peaches around ham. 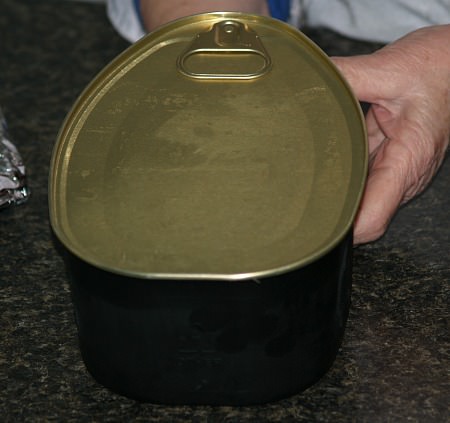 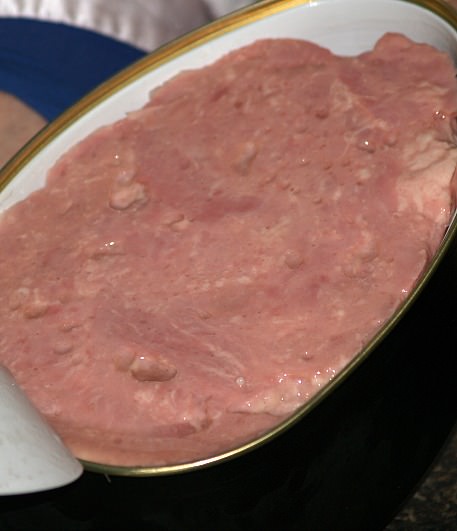 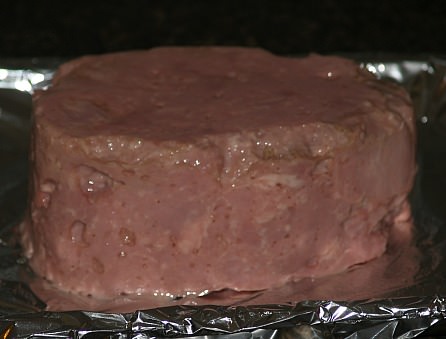 Remove ham from can and place on rack in roaster; bake 2 hours until thermometer reaches 130 to 140F degrees.

Remove saucepan from heat; brush ham with sauce during the last 30 minutes of baking.

Arrange corn cakes on platter with ham; spoon some sauce over ham and serve remaining in a bowl.

HOW TO MAKE CORN CAKES

Stir in milk, salad oil and egg until flour is moistened.

Drain can of corn; stir corn into batter.

Heat 1 tablespoon of oil over medium heat in a large skillet.

Turn corn cakes over and cook until undersides are golden brown.

Place corn cakes on a warm platter and keep warm until all batter is cooked; add more oil if needed.