Why Mom and Dad were spending so much time canning beets through the summer I never could understand. I just hated the taste of red beets and I could not believe that anyone could possibly like the flavor. My first taste of this vegetable was just plain boiled beets; I believe we had a little butter on them. 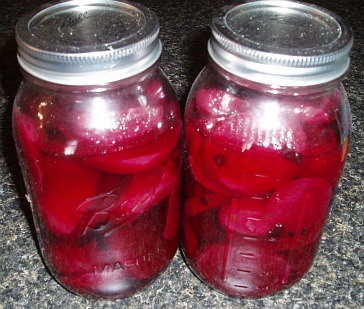 Canning Beets that are Pickled

After this, I would not eat them again until many years later. When I finally tried them again it was a pickled beets recipe; I love the flavor of these.

I have a couple of tips for you when canning beets. First, if you are canning pickled beets with a lot of vinegar in the recipe, you can do it in a hot water bath. If canning beets plain in water (no vinegar) you must use a pressure cooker due to low acidity. Second, when you are preparing the beets for cooking before packing to can, leave at least 1 inch of the stem on each of the beets and roots; this prevents the red color from bleeding out.

Select good quality when canning beets. Avoid any with decay or bruised spots on them. You can pack and can small size whole beets or after cooking you might want to cut larger ones in chunks. Wash the beets leaving the skins on and 1 inch of stems (as I said before). Drop in boiling water and precook 15 minutes or until just tender with fork; slip off the skins.

NOTE: Do not throw away the tops when canning beets. They are delicious cooked as greens. You can even blanch and freeze them. 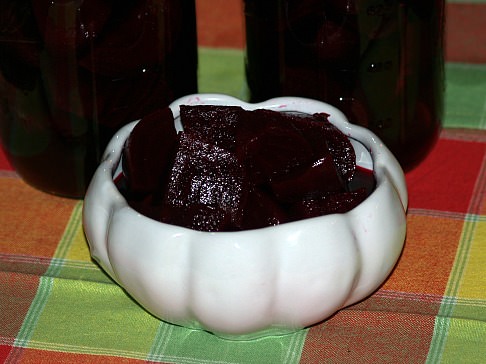 Cover with boiling water and cook whole until tender.

Pack hot beets into clean hot jars; cover with hot syrup to within ½ inch of top of jar.

Process in a boiling hot water bath for 30 minutes; begin timing when jars are placed in the boiling water. 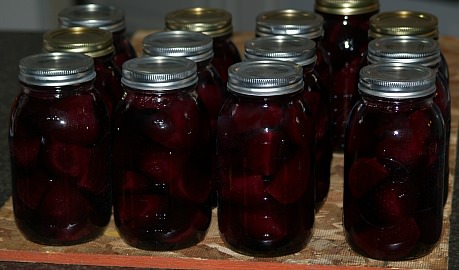 When preserving beets with low acidity (no vinegar) you must process in a pressure cooker.

Canning beets during the growing season can be enjoyed all year with great recipes. Try the delicious recipe below.

Mix cornstarch and water and blend into orange mixture.

Cook until clear and thickened; stir in cubed beets and simmer 10 minutes.

Canning beets will be useful to make Harvard beets recipe.

This is my favorite dish to make with the beets.

Place eggs in a bowl.

Heat beets and liquid until sugar dissolves and pour over the eggs.

Cover and refrigerate; stir occasionally to marinate all the eggs in the juice.

When canning beets there are many great recipes to use them in with a variety of different flavors; this one is delicious.

Combine in a saucepan over medium heat brown sugar, cornstarch and salt; stir in pineapple and syrup.

Using small whole beets, cut tops off leaving about 1 inch of stem; cover with water and boil until tender.

Drain beets and peel off skins; leave whole or slice and place in a clean pot.

Add beats to the boiling mixture; simmer for 15 minutes.