Charlotte recipes are at the top of my favorite dessert list. They are delicious but they are also very elegant. Since they are made with some type of bread or cake, cream or custard and sometimes fruit or fruit puree, you enjoy this great combination in one bite. I love Charlottes to serve as a finale to a very special dinner or just with coffee or tea to special guests. This dessert makes such a beautiful presentation whether it is made in individual servings or as one large dessert. 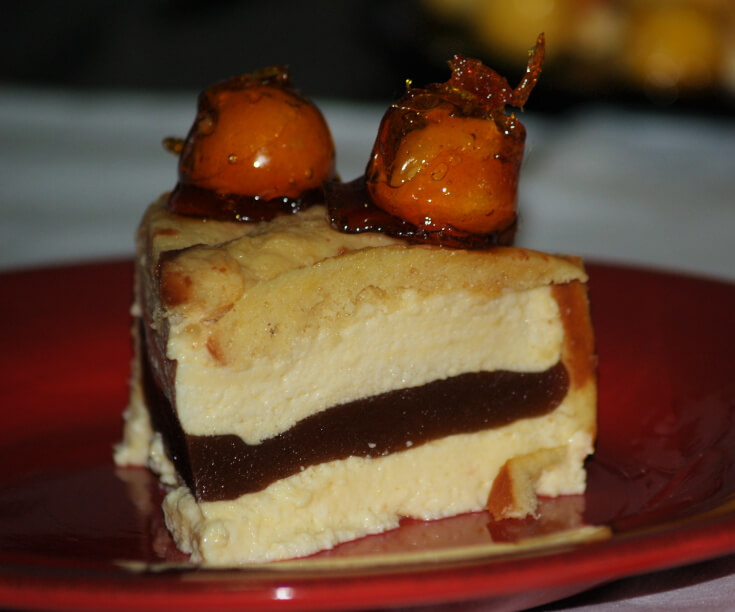 I have always known of the Charlotte recipes being French even though the original does have a “touch” of Russian in it. Back during the eighteenth to nineteenth centuries, a French chef created this delicious dessert. It was to honor both a past and present employer; Princess Charlotte and Russian Czar Alexander I. The original dessert name was Charlotte Russe (Russe meaning Russian). Today you will find many recipes named “Charlotte Russe” but each will most likely be different and none exactly like the original.

Many people refer to Charlotte recipes as a “trifle”. I suppose you could say that because both do have ingredients which are alike.  I choose to separate my recipes for a couple of reasons.  First I make all my trifles in even layers even though they might use the same ingredients as Charlottes. Trifles are also very delicious. To me, Charlotte recipes are different because the ingredients are so perfectly placed making the presentation more elegant.

As with most recipes the Charlotte has evolved through the years into many great recipes. I have found each one is tastier and more beautiful than the last. You can make one of these desserts with all your favorite flavors. Instead of using breads (Unless it is a sweet bread), I prefer lady fingers or cut sponge cakes. Charlottes can be assembled in bowls, molds or spring form pans.  I also love to make jelly rolls and other filled rolls to line molds or bowls which make very pretty presentations.  After slicing these rolls, place the slices neatly to line the bowl (Or use lady fingers or other breads).  After filling with gelatins, custards, creams etc. it is refrigerated until set. When you unmold this dessert onto a plate, it is beautiful. 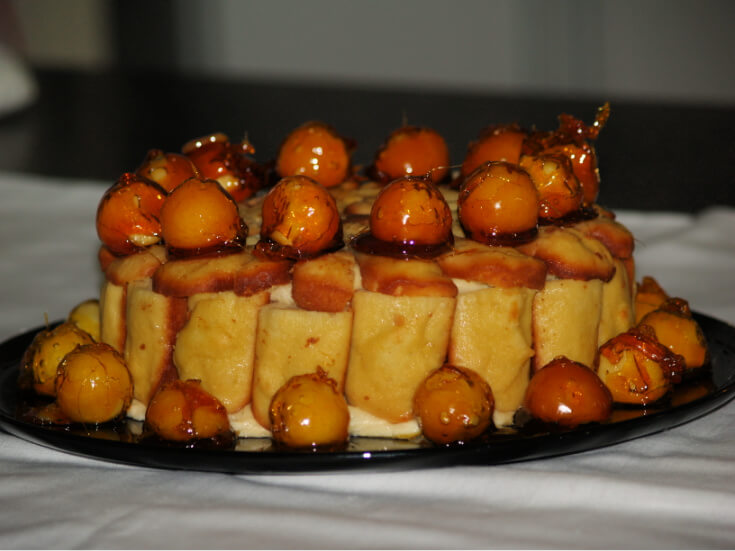 Combine the milk and cornstarch in a medium saucepan; stir in the honey.

Cook and stir mixture over medium heat until thick and bubbly.

Stir 1 CUP of the hot mixture into beaten egg yolks; return to the saucepan.

Return pan to heat and cook 2 minutes; remove from heat.

Add the softened gelatin to the yolk mixture; stir in vanilla.

TO MAKE APPLE BUTTER FILLING combine the gelatin with lemon juice and water.

Let stand on counter top at room temperature until ready to assemble.

Line bottom of a round 8 inch springform pan with wax paper.

Line sides of pan with ladyfingers with cut side facing in.

Arrange ladyfingers in bottom of pan in "spoke fashion" with cut side facing up.

TO ASSEMBLE CHARLOTTE beat HONEY mixture until blended and light; set aside.

With clean beaters beat the egg whites until stiff; fold into honey mixture.

Pour HALF of the HONEY filling into the prepared pan.

Place pan in the refrigerator until partially set (Surface should still be sticky).

Spoon APPLE BUTTER FILLING lightly and evenly over the honey filling in pan.

Pat the balls dry with paper towels; stick each ball with  a buttered skewer.

NOTE: Arrange an area where you can weight down the skewers to hold the balls so they can drip after dipping. Place paper under them to prevent a mess.

NOTE: I simplify this process by coating the apple balls and placing them on parchment paper until ready. Some of the melted sugar drips on the paper around balls so they are not as neat but a lot easier.

Place the sugar in a heavy saucepan; heat over medium low without stirring.

When sugar begins to melt stir until caramel in color and is liquid.

Arrange balls over the paper to drip until harden weighting the skewers down.

NOTE: If caramel begins to harden you can stir in a little water.

FINAL ASSEMBLY: Remove from refrigerator; trim ladyfingers even with top of filling.

Loosen the Charlotte from the pan; invert onto a cake plate and peel off wax paper.

Remove skewers from apple balls and arrange on Charlotte; garnish with whipped cream.

NOTE: A little whipped cream will hold apple balls in place if needed.

Serve immediately; apple balls do not hold up well and do get running after awhile.

Many favorite Charlotte recipes are made with chocolate.

Soften gelatin in the cold water.

Melt chocolate in ½ cup water over low heat while stirring.

Remove chocolate from heat; stir in gelatin until dissolved.

In mixing bowl beat YOLKS until thick and lemon colored.

Beat in ½ cup of sugar; beat in vanilla and salt.

In clean bowl beat egg WHITES and cream of tartar until frothy.

Fold whipped cream and nuts into the chocolate mixture.

TO SERVE cover with the whipped cream and shaved chocolate.

Learn how to make charlotte recipes with a light vanilla flavor.

Combine the egg yolks and ¼ cup of sugar in mixing bowl.

Beat on medium speed of mixer until thick and lemon colored; set aside.

In a small saucepan sprinkle gelatin over the cold water; let stand 1 minute.

RESERVE ¼ CUP of the whipped cream for garnish.

Split ladyfingers in half lengthwise; use to line 2 ½ quart glass bowl.

Heat mixture over low stirring until dissolved 2 to 3 minutes; add to egg mixture.

Whip the cream in another bowl until stiff; add vanilla.

Line the bottom and sides of a spring form pan (12 to 14 inches) with ladyfingers.

Pour the filling mixture into the lined pan; cover and refrigerate until firm.

Bring mixture to a boil; cook for 12 minutes without removing lid.

Remove from heat; beat in sugar and marmalade with wooden spoon.

Line bottom with some triangles buttered side to the bottom.

NOTE: Overlap all bread because it tends to shrink during cooking.

Line the sides of mold with the bread fingers buttered side to the bowl.

NOTE: Top triangles with buttered side up.

Bake 30 to 40 minutes until top is golden brown; remove from oven.

Cool slightly in the mold; run knife around edge and unmold on warm plate.

Beat egg yolks until thick and pale in color; set aside.

Cook butter and sugar over low until well blended.

Add milk to saucepan; cook and stir until heated (Not boiling).

Place mixture in top of double boiler over hot water (Not boiling).

Add salt; cook and stir until thickened and mixture coats the spoon.

Remove from the heat and stir in softened gelatin until well blended.

Refrigerate until mixture begins to thicken.

Line a bowl or mold with separated lady fingers.

Fold together the gelatin mixture, egg whites and whipped milk.

Pour into the lined bowl or mold; cover and refrigerate until firm.

FOR CHARLOTTE place a layer of ladyfingers in bottom of lightly oiled 1 quart mold.

Sprinkle berries with sugar and rum.

Continue layering the ladyfingers, strawberries and raspberries in same order.

NOTE: After each layer of raspberries sprinkle with sugar and rum; press each layer down.

When mold is full top with a layer of ladyfingers.

Cover the content with a cardboard round wrapped in plastic wrap or foil.

Top with 2 to 3 pounds of weight; refrigerate overnight.

Beat egg yolks and sugar together in mixing bowl until thick and pale yellow.

Slowly add the scalded milk to the yolk mixture while beating constantly.

Transfer mixture to a heavy saucepan; place over low heat.

Cook and stir mixture constantly with a wooden spoon until it coats a spoon.

Place pan in a bowl of ice with very little water; stir for 5 minutes until slightly cooled.

TO SERVE unmold Charlotte onto a serving plate; pour custard sauce over top.