How to Make Cheese Soup Recipe

I never learned how to make a cheese soup recipe when I was young. This was never in my “vocabulary” until the last two to three decades. Remembering back when I was young, a large selection of cheese was not available in this country. What was available was quite expensive in comparison to other ingredients back then.  When Mom would buy a piece of cheese, it was Colby, Longhorn or Cheddar cheese. It was a luxury to get a small slice to enjoy with nothing else, simply the great cheese flavor. Before slicing, Mom would let it set a room temperature for a period of time to soften. The flavor was fabulous!

Learning how to make a cheese soup recipe could never have even been a thought because of the price we had to pay for cheese. Frequently, Mom would buy the cheaper Velveeta Cheese. This was used for macaroni and cheese dishes and to eat but no one ever thought about “wasting” it on cheese soup.

It was after I moved to Florida that I saw broccoli cheese soup on a menu in one of the restaurants. Everyone was “raving” over this soup; how wonderful it was. I just couldn’t imagine a soup like that but I must say it had me curious. One day I decided to try it and immediately the flavor won me over. I was hooked by the creamy delicious cheese flavor.

Today, we are seeing more and more various recipes for cheese soup. With the great availability of many different kinds of cheeses we are able to achieve so many wonderful flavors when we learn how to make cheese soup recipes. What was once made mostly with sharp flavored Cheddar cheese, now cheese soups are made with other cheese like Swiss, Gruyere, American and others with good melting capabilities.

I have not been able to find much of a history of cheese soup recipes here in the United States or in other countries of the world. Leading me to believe this is a fairly new concept. The oldest references are from France in the early nineteen hundreds and it is for a soup with cheese in it. It is made with a hard cheese which does not melt totally and blend into the soup therefore lacking in the creamy cheese flavor.

HOW TO MAKE CHEESE SOUP RECIPE with POTATO

Cook the potatoes, carrots, celery and onion in the 2 cups of water until tender.

Add the butter. In a bowl, add milk slowly to the flour, stirring to make a smooth cream sauce.

Add the cheese to the hot vegetable mixture.

When the cheese has melted, add the milk and flour sauce, stirring constantly to blend while pouring.

Garnish with chopped parsley and serve.

Many people use beer in much of their cooking. In the following soup recipe, the alcohol from the beer is cooked out and leaves a delicious flavor in this cream soup.

In heavy saucepan, sauté garlic in butter over medium heat; add chicken broth and bring to a boil.

Slowly add beer to flour stirring to make it smooth; add to hot broth whisking to blend in.

Cook and stir until slightly thickened.


Add grated cheese and seasoning and stir until cheese melts. 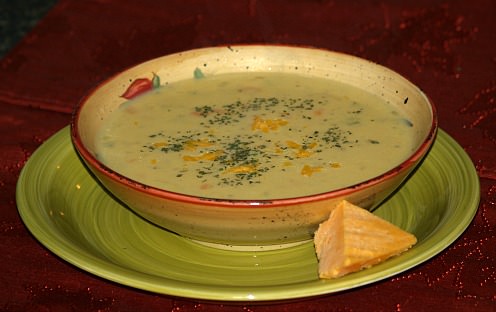 Melt butter and sauté onion, carrots and celery until soft.

Add flour and cornstarch and stir in.

Season with salt and pepper to taste.

Melt butter in pan on medium low heat; add flour and stir until blended.
Add chicken broth and bring to a boil while stirring until thickened.
Reduce heat; add remaining ingredients except for noodles and simmer until broccoli is done.
Add precooked noodles; serve in bread bowls or jumbo bowls.