I could not wait to learn how to make chicken cordon bleu recipes. These recipes are likely to have evolved from similar recipes out of Switzerland. Most likely the original recipes were made from thin veal cutlets instead of chicken. I never tasted any, veal or chicken, until probably in the late 1970’s. As I remember the first one I tasted was chicken; it was frozen and heated in the microwave. Even though I never was fond of prepackaged foods, I thought this was the absolute most delicious frozen thing I had ever eaten. Of course I had to learn how to make it at home.

I have learned how to make chicken cordon bleu recipes; after collecting many recipes only a few are a little different. All the recipes contain three basic ingredients; chicken breast, ham and cheese. The original rolled chicken recipes start with a chicken filet which has been pounded to a thinner cutlet. The breasts are then stuffed with various types of ham or pork and with cheese. After being rolled up like a jelly roll, they are cooked usually by frying or baking.

The combination of these three ingredients produces such a good taste that they became popular with American diners; so popular that most restaurants at one time had this on their menu. Cooks began to incorporate these ingredients in their own original recipes. Today various types of ham, different type of cheeses, different seasonings and vegetables have been added to the recipes. Now I have learned how to make chicken cordon bleu recipes wrapped in puff pastry and recipes for soups and casseroles. I make the rolled cordon bleu recipes in various sizes; small appetizers, individual ones and a family size.

The chicken cordon bleu recipes are so delicious that they are suitable for serving for any occasion; even the most elaborate celebration. One would think that something this good has to be time consuming and difficult to prepare. Actually the complete opposite is true; some are very easy chicken cordon bleu recipes. By using deli ham, deli cheese, chicken breast from your local butcher and canned soup, nothing could be easier. 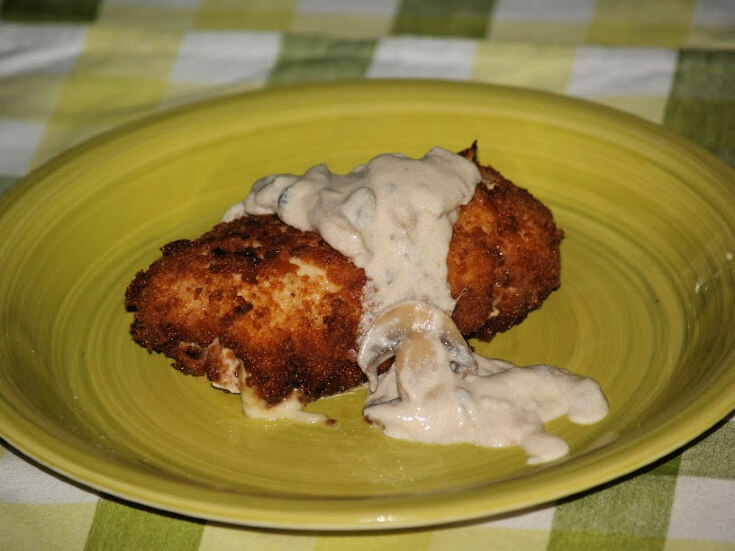 Combine all ingredients in saucepan and heat over medium.
Stir occasionally until thoroughly hot (Not boiling); serve over chicken rolls.

Pound chicken breasts out with mallet to about 1/8 inch thickness.
Season with salt and pepper; sprinkle with parsley.
Place on top of each breast 1 slice of cheese and 1 slice bacon.
Roll up like a jelly roll and secure with wooden picks.
Cook rolls in oil in large skillet on all sides until golden brown.
Thin soup with milk to make sauce; pour over chicken rolls.
Bring to a boil over medium heat; simmer for 25 minutes. 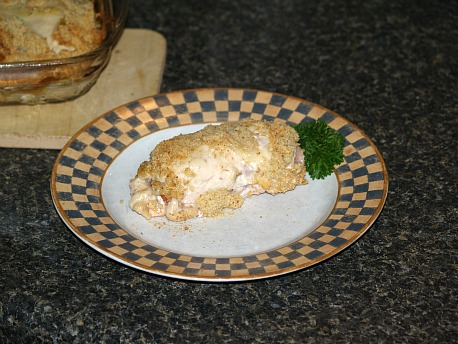 Pound breasts until thin and even thickness.
Top each breast with slice of ham and slice of Swiss cheese. 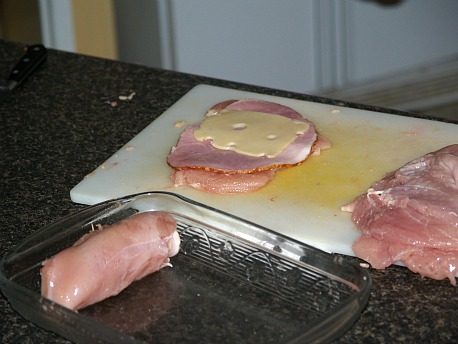 Roll up and place seam side down in lightly oiled shallow pan.
Add little milk to soup and pour over chicken rolls; top with breadcrumbs.
Bake in preheated oven at 325F degrees for 1 to 1 ½ hours or until sauce bubbles and chicken is done.
Cover with foil if crumbs begin to brown too much. 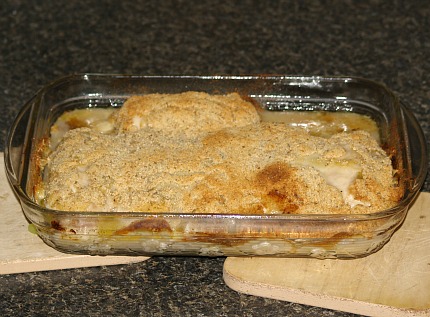 Lay out 1 small slice deli chicken; top with small slice deli ham.
Place strip of cheese at one end and start rolling up; secure with wooden pick.
After all have been rolled refrigerate until ready to fry in beer batter.
To make batter combine biscuit mix and sugar; stir in buttermilk and beer to a smooth batter
Heat cooking oil until hot; dip mini cordon bleu rolls into batter one by one.
Fry quickly in hot oil and drain on paper towels; remove picks to serve.
NOTE: Horseradish dip or honey mustard dip goes well with this chicken cordon bleu recipe.

Pound chicken breasts until about 1/8 inch thick and even thickness.
Place a ham slice on top of chicken; spoon about ¼ cup cheese down center of each chicken/ham.
Roll up like jelly roll and tuck in the ends; secure with wooden picks.
Combine and blend cereal, garlic salt and pepper in bowl.
Roll cordon bleu rolls in melted butter; dip in cereal mixture.
Place in 9 X 13 inch baking pan; bake in preheated oven at 350F degrees for 50 to 55 minutes.
Combine soup and sour cream in sauce pan and heat just until thoroughly hot; not boiling.
Spoon sauce over chicken to serve.

Pound each breast with a mallet to ¼ inch thickness; place 1 slice of ham on top of chicken.
Top ham with 1 slice cheese; sprinkle with parsley and pepper.
Roll up and secure with wooden picks; dip each into beaten egg and coat with crumbs.
Melt butter in heavy skillet and brown each roll; place in 8 X 12 baking dish and reserve drippings.
Add sour cream and cheese soup to drippings in skillet; stir in sherry or wine and pour over chicken.
Bake uncovered at 350F degrees for 40 to 45 minutes.

This chicken cordon bleu recipe for a casserole has all the familiar ingredients included in the typical rolled chicken recipe.