How to Make Chicken Soup Recipes

Learning how to make chicken soup recipes is a must; everyone loves some form of this soup. These recipes can be served in a clear broth, creamed, with noodles, dumplings or vegetables. Chicken soup has earned the reputation of being a natural cure for colds and flu. Scientists have found in their studies that components in chicken soup have an anti inflammatory effect which leads to the ease from symptoms of the illness. (I have found this true with chicken noodle soup; I always buy the organic chickens for added health benefits.)

If you have known how to make chicken soup for many years you will know that chicken soup recipes came from cooking the old hens after they quit laying eggs. These chickens were too tough for most other chicken recipes but after several hours of cooking had more flavor which made a great soup.

If you are learning how to make chicken soup recipes, you can add anything you like to the pot. The mild flavor of chicken blends well with almost all other soup ingredients. If you like, you can add beef or pork with the chicken. All kinds of vegetables will go well with the chicken. Rice, noodles, potatoes or dumplings are delicious added for more bulk and many flavorful spices make it very delicious.

HOW TO MAKE CHICKEN SOUP RECIPE with VEGETABLES 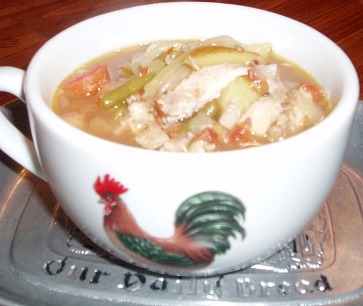 How to Make Chicken Soup Recipes

Place a cleaned 3 to 4 pound chicken in a large cooking pot and cover with water. Cook until tender and meat falls from the bone. Remove chicken from liquid and remove meat from the bones. Cut meat into small pieces and set aside. Save 3 quarts of the broth and discard rest.

Add to the 3 quarts saved broth: 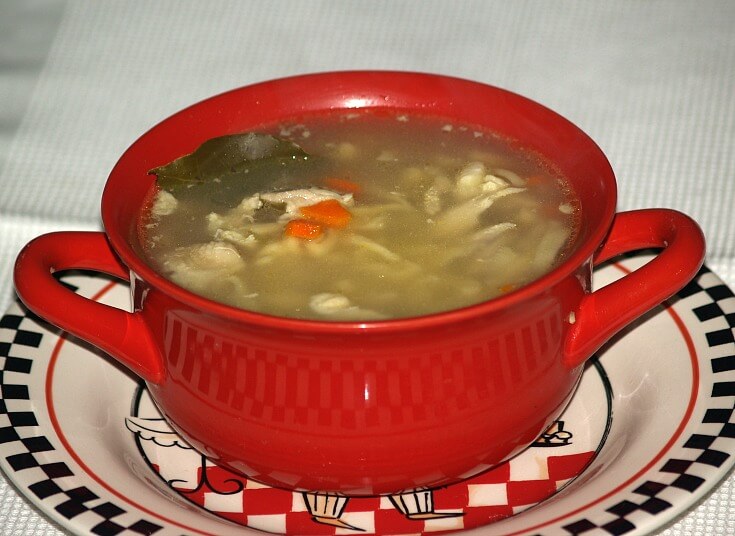 Add carrot and onion to broth; cover and simmer 30 minutes. 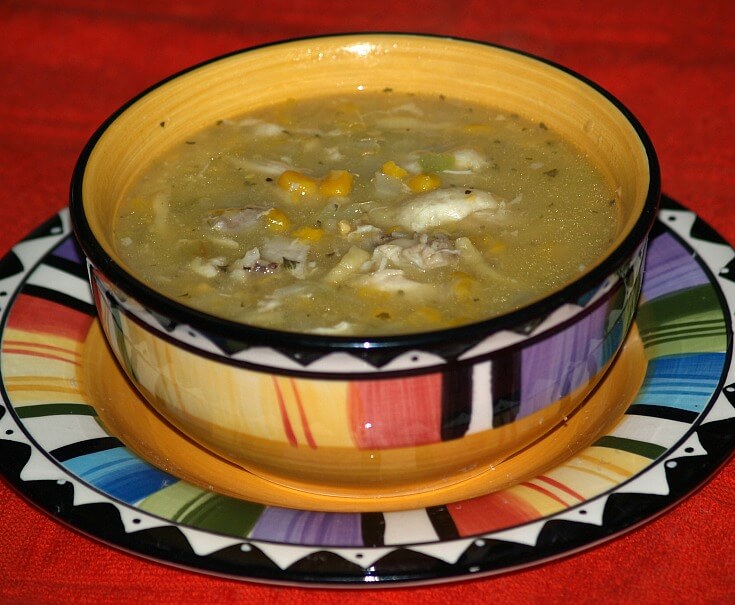 Add corn and chicken broth; bring to a boil and cook 10 minutes.

Cook a few minutes until hot and noodles are tender.

Season with salt and pepper; ladle into bowls.

The following is one of the spicy hearty chicken soup recipes. It is very delicious and even better when warmed over.

Pour in wine and bring to a boil.

Add broth and cook until liquid is reduced by half stirring occasionally (about 12 minutes).

Season with salt and pepper.

Cook chicken covered with water; season with salt and pepper.
Cook until chicken is tender; remove bones from chicken and discard.
Cut chicken into cubes and set aside with broth.
Heat oil in large Dutch oven; add cabbage, endive, leeks, onion, celery, carrots, basil and garlic.
Sauté mixture about 10 minutes stirring occasionally.
Add chicken, broth (have enough liquid for soup) chick peas and zucchini.
Bring to a boil, reduce heat and simmer 10 minutes.
Stir in tortellini and parsley; check for seasoning (adjust salt and pepper).
Simmer for 10 to 20 minutes until tortellini is tender.
Serve with croutons and Parmesan cheese.

In soup pot add enough water for both the soup mix and the rice mix as directed on the packages.

Bring the water to a boil; add all the contents of the soup mix and the rice mix; boil 15 minutes.

Add the celery, carrots, onion and chicken stirring to mix; cook for 10 minutes until tender.

Stir in cream soups; if too thick stir in another 1 cup water if desired.

In large pot combine broth, carrot, onion and celery; bring to a boil.

Reduce heat and simmer about 15 minutes until vegetables are tender.

Stir in seasonings, rice and chicken; blend in cream and heat thoroughly.

Sauté onion, celery and carrots over low heat until tender.

Add flour and stir for 5 minutes; gradually stir in chicken broth until blended.

Bring mixture to a boil, cover and cook over low heat for 5 minutes.

Stir in heated half and half; heat thoroughly but do NOT boil.

Add salt and tarragon; bring to a boil and simmer 1 hour until chicken is tender.

Remove chicken from broth and cool; remove meat from bones and chop.

Skim fat from stock; puree vegetables with 1 cup of the stock in processor.

Return stock to Dutch oven and bring to a boil; stir in barley and pureed veggies.

Simmer 1 hour or until barley is tender; stir in chicken, curry, sherry and cream.

Bring to a boil; reduce heat and simmer 3 minutes stirring to separate noodles.

Cook wild rice in water for 20 minutes; drain and return to pan.

Add water and cook another 20 minutes until rice is tender and fluffy.

Dice bacon and cook until crisp; drain on paper towels.

Ladle into bowls and garnish with parsley; serves 6.