When thinking about childrens party ideas you only have to look to the past. The candle salad developed in the South during the 1950’s and 1960’s. This fruit salad recipe was one that all the children liked. This childrens recipe was so simple to make that many children made them... it was a way for moms to get their children to eat foods that were good for them.

It starts by laying a piece of lettuce on a salad plate. Next place a slice of fresh peeled and cored pineapple (about ½ inch thick) on the lettuce. Place half of a banana in the hole of the pineapple slice. Some use only mayonnaise to show the melted wax at the top of the banana. I mix a little peanut butter with mayonnaise; it adds the nutritional value of peanut butter, the kids like the peanut butter and it shows up better on the banana. Last a bright red maraschino cherry is added to the top of the banana to resemble a burning flame.

Throughout the years since the innovation of the Candle salad, this popular fruit salad recipe has become known as a vintage salad. It even gained notoriety in the movie “Lives of Bees” a Lifetime movie about the “Old South”. 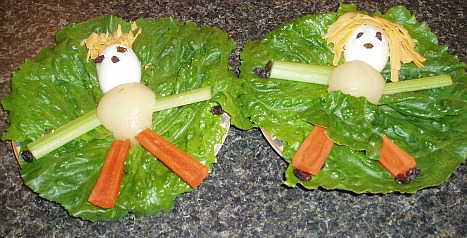 Raggedy Ann and Andy were brother and sister. These fictional characters were created in the early 1900’s by a father for his daughter. As most of you know, these characters became very popular to the children. These character salads will also be a great hit for your children and a good way to give them healthy foods.

Like the candle salad and the Raggedy Ann and Andy, children will also love this flower salad. It also is good to serve to adults as an appetizer. The mashed potatoes make a great spread for pita bread. It is one of the easy childrens party ideas.

Whip up mashed potatoes, adding a little softened cream cheese, some fresh minced garlic and salt; Beat until light and fluffy and refrigerate until cold.

Scoop a round ball (size of baseball but flat on one side) of mashed potatoes on a salad plate.

Cut petal shapes from red or yellow bell peppers; arrange around the ball of mashed potatoes.

Cut a round slice from a small cucumber; press it in the center of the mashed potatoes for the flower center.

Childrens party ideas should get a child’s attention.
For each plate line it with lettuce.

Be creative in coming up with childrens party ideas.

Some childrens party ides can be made by the children like these apple slices.

Some childrens party ideas make your child want to “dig in” to eating vegetables.

Cut out core of lettuce; hollow out center leaving 1 inch thick shell.
Wash, drain well and pat dry.
Beat the cream cheese and mayonnaise until smooth and blended.
Add chives and next 5 ingredients; mix until well blended.
Pack cheese mixture in the center of the lettuce head.
Use vegetable pieces to make a face on cheese center.
NOTE: For instance use shredded carrot for hair; red pepper for mouth, etc.
Wrap lettuce head in damp paper towels then in foil.
Chill for 2 to 3 hours; cut in wedges to serve

Be creative with your childrens party ideas using various types of molds.