I learned how to make ac chocolate flan cake recipe only recently. I came across a recipe on Eagle Brand products website. Have you ever been so intrigued with a recipe that you simply had to try it? This is the way I felt about this cake recipe.

Flan is so popular with many people, especially with my reader friends in Central and South America. The name alone got my attention. Next I was reading how it is made. It is made in layers.  Layer one to go in the baking pan is a caramel sauce; like a caramel sauce for flan. Layer two is a chocolate cake batter. The third layer is milk and egg mixture like flan. When this bakes, the flan mixture is suppose to drop to the bottom on top of the caramel and the chocolate cake is suppose to rise to the top of the pan. When this cake cools and you invert it onto a plate, the chocolate cake should be on the bottom, the flan mixture on top of the cake and the caramel should be on the top.

This recipe calls for a chocolate cake mix and a jar of prepared caramel sauce which I rarely purchase so I did not have any in my pantry.  I also like to make everything from scratch for myself but also for all my readers. When it comes to packaged foods, I am not sure if it is available to all my friends in all the countries. I decided to learn how to make a chocolate flan cake recipe from scratch.

HOW TO MAKE CHOCOLATE FLAN CAKE RECIPE (from scratch) 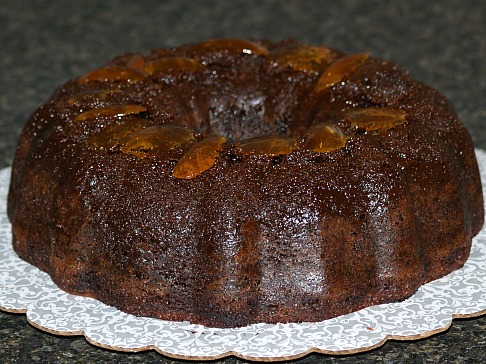 How to make Chocolate Flan Cake Recipe from Scratch 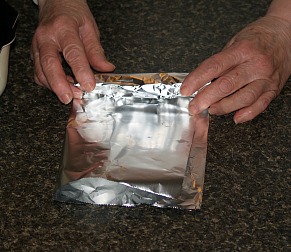 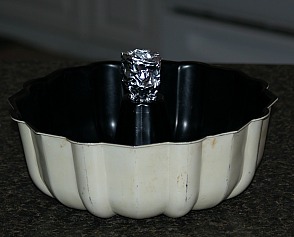 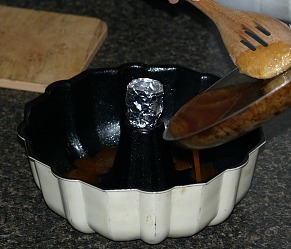 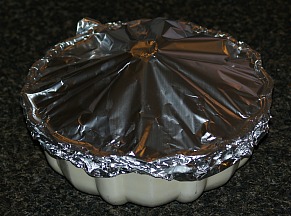 Place rolled up foil in tube of pan to prevent cake from baking over the top.

I learned how to make a chocolate flan cake recipe but when making it from scratch the results were nothing like the picture showed. The white flan mixture blended completely into the chocolate cake as it baked. This might be contributed to my cake batter being thinner; I don’t know. My recipe really is like chocolate flan. The texture is like flan or a steamed pudding; the taste is a delicious smooth moist chocolate. If eaten at room temperature, there is a definite egg taste like in flan. This taste seems to disappear some when refrigerated overnight.

Below: A cut piece of the chocolate flan cake recipe 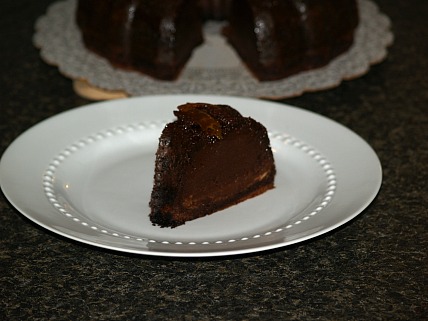 Since my recipe did not turn out like the picture, I felt I had to try it exactly the way the recipe was for the picture. I drove to the grocery store and purchased the RIGHT cake mix and the caramel syrup. I was determined to follow the instructions in detail. From the Eagle Brand link above, I printed out this recipe. 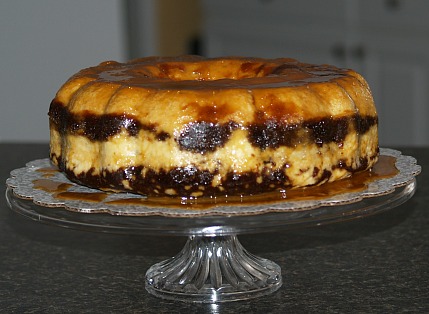 CONCLUSIONS
As you can see by my pictures, it doesn’t look quite like the original picture, especially on the outside of the cake. The inside looks more like it but as you can see, not the perfection. Where did I go wrong?  Or maybe the professional picture is just “too” professional. Check out the original chocolate flan cake recipe at the above link and try it. Let me know how your chocolate flan cake recipe turns out.
I will say this is a very good cake. If you like flan and use packaged cake mixes, you will love this recipe. I am not sure how available sweetened condensed milk is in all countries so I have added a recipe to make it from scratch if you cannot buy it. 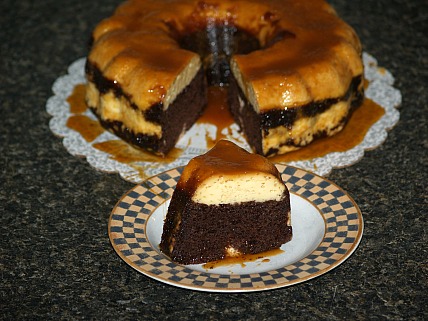 The following recipe is not like the chocolate flan cake recipe nor is it like a typical flan recipe. Although it has been titled “flan”, the recipe contains no eggs as is common with all traditional flan recipes. I would say it is more like a mousse but still very delicious.

The next recipe is also not one like the chocolate flan cake recipe nor is it like the traditional recipes with eggs.  I think both of these recipes could better fit into the category of “mousse” rather than flan but since these were called flan when the recipes were given to me I am leaving them at that.