How to Make Chocolate Fudge Recipe

If you are learning how to make a chocolate fudge recipe you will see it is is almost every family’s favorite candy. Like myself, many of us have fond memories of childhood when we would want something sweet and our mother (in my case) or dad would whip us up some fudge. A few simple basic ingredients like Hershey’s cocoa powder, sugar and milk would transform into the most yummy and delicious fudge imaginable. Now I know that many more ingredients can be included in this list to make a much larger variety of this great candy. 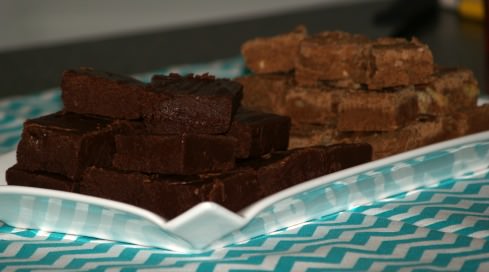 How to Make Chocolate Fudge Recipe

When you are learning how to make a chocolate fudge recipe the texture depends on crystallization. It is made from sugar syrup enriched with cream or butter or both. Fudge is cooked to a soft ball staged and then worked so that the air and minute sugar crystals disperse throughout the syrup. This is usually done by beating with a spoon. This basic syrup can be flavored with a variety of ingredients like coffee, honey or vanilla. The texture can be altered with ingredients such as nuts and fruits.

The techniques used in preparing a chocolate fudge recipe can also significantly change the character of the product. The temperature to which you cook the syrup for candy will vary the outcome of your candy. Although many people make candy successfully without a thermometer (especially fudge) this is one product that I highly recommend for you to buy to ensure accuracy. Also the preparation after the cooking can change your final product. Beating the syrup while it is still very hot creates the formation of large crystals which in turn produces a firm grainy candy. A smoother and creamier candy is accomplished by letting the syrup set until lukewarm (110F degrees) before starting the beating process.

If you are learning how to make a chocolate fudge recipe, another common mistake is not beating the candy long enough so that it will hold its shape. If it does set before you can turn it out just knead it a few times and it will become creamy again and then can be spread out. It may not be as attractively swirled on top as it would have been but it will still be very delicious. Try to resist scraping every bit from the pan when pouring it out on a platter; this is usually too sugary. As a child I remember Mom would always let us have spoons to scrape this from the pan. It was so delicious!

Try a chocolate fudge recipe and change it to a variety of flavors by adding nuts, coconut or peanut butter. Marshmallow cream fudge is very easy to make; it is known as never fail fudge. The marshmallow cream makes the fudge soft and creamy and so delicious. I have made this rich sweet confection with coconut and peanut butter and it is excellent.

Combine in a pan the marshmallow cream, sugar, butter, salt and milk.

Remove from heat and stir in the chocolate chips, nuts and vanilla.

Pour into the prepared dish and let set until cold.

This chocolate fudge recipe or you might say chocolate peanut butter candy is a little firmer than the marshmallow cream fudge. It is also cheaper to make using the cocoa powder but is just as flavorful and delicious.

Combine sugar, cocoa, milk, and salt in a large saucepan and bring to a rolling boil.

Remove from heat and quickly stir in butter, vanilla and peanut butter.

Stir briskly to blend and then pour onto a buttered platter.

Cool before trying to cut.

Combine sugar, milk and butter in a saucepan.

Combine sugar and milk and bring to a boil; stir constantly for 10 minutes.

Have butter and chocolate chips ready in another large pan; add boiling milk mixture to chips.