How to Make Chocolate Pudding Recipe

Learning how to make a chocolate pudding recipe is one of the first desserts we learn how to make. A delicious pudding is one of the first things that pops in our minds when a creamy dessert is mentioned; it has to be chocolate because that is the favorite around the world. Many use the quick and easy method by mixing up a box of pudding mix and I might add they are quite good in taste. A bowl of this dessert topped with whipped cream is a great way to finish a good meal. This same pudding mix can also be used as layers of a trifle or between cake layers.

You might also want to experiment with the different types of chocolate when learning how to make a chocolate pudding recipe. Semi sweet, bittersweet or milk chocolate gives the dish a different flavor; you will also find a difference in taste when using different brands of chocolate. Since chocolate and pudding recipes are so popular all over the world, try some of the recipes from other countries. For instance, some Spanish countries enhance their recipes with coffee and cinnamon adding very delicious and unique flavors.

HOW TO MAKE CHOCOLATE PUDDING RECIPE

Combine the cornstarch, sugar, cocoa and salt in a heavy saucepan.

Cook over medium heat stirring constantly, until mixture starts to thicken. (do not boil)

Return to heat and cook until pudding consistency.

Refrigerate until cold and serve with whipped cream.

A favorite pie of many chocolate lovers is the chocolate meringue pie. It is made with a luscious chocolate pudding poured into a baked pie shell and topped with a heavenly meringue.

This chocolate pudding recipe came to me from a friend out West. It is more like a cake pudding and is great topped with whipped cream or ice cream.

Set until cool and serve with whipped cream or ice cream. 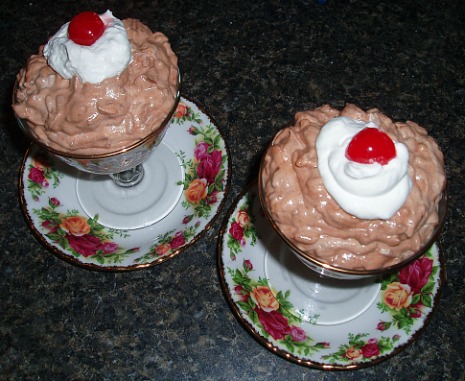 Cook over boiling water for 2 hours until liquid is absorbed.

Chill; serve plain or sprinkled with cinnamon and sugar.

This chocolate pudding recipe is kept moist by steaming. Put 1 inch of water in a steamer or covered roasting pan or kettle. Place mold on rack and cover the steamer. Use medium or high heat until steaming begins, reduce heat to low keeping steam steady and slight.

Sift flour, measure and resift with salt and baking powder.

Pour into a greased and sugared 1 quart mold; steam covered for 1 ½ hours.

Remove from steamer and let stand a few minutes before unmolding; serve warm.

When I was young, the only kind of chocolate pudding recipe many served in their homes was a chocolate bread pudding recipe. It was a way of using up old bread and have dessert too.

Heat chocolate and milk in saucepan until chocolate is melted; add salt.

Turn into a buttered baking dish; set dish in pan of hot water in oven.

Bake 30 minutes or until almost firm.

Pile meringue on top of bread pudding and continue baking until meringue is golden brown.

This frozen chocolate pudding recipe can also be called chocolate ice cream recipe. It is made with a chocolate cooked custard like pudding and then frozen in your refrigerator freezer. So delicious in the summer! Or any time!

Combine sugar and cornstarch in top of double boiler; gradually stir in milk.

Stir a little of the hot mixture into beaten egg yolks; then stir back into hot mixture.

Cook over hot water (not boiling) stirring constantly for 3 minutes; remove from water and cool.

Pour into refrigerator freezer tray and freeze until firm throughout.

Whip heavy whipping cream only until it holds its shape (too stiff will cause buttery texture).

Remove frozen pudding from freezer and into a chilled bowl and break up with a wooden spoon.

Beat frozen pieces with mixer until mass is free from hard lumps but still crumbly (too much beating and liquid will form).