Most of you probably grew up having these candies and just take them for granted. I remember the first time I was introduced to the turtles candy. It was at Christmastime and I was working at NCR. These candies were being sold in huge boxes and everyone was passing them out to us at work. I thought those were the best candies I had ever tasted! At that time I never thought about how to make chocolate turtle cheesecake recipes. 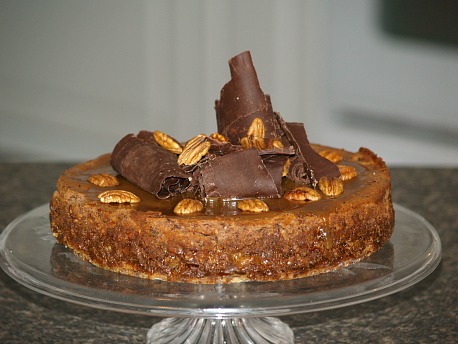 Now to think we have those combined with cheesecake. How delicious! For me knowing how to make chocolate turtle cheesecake recipe I know it must have the same ingredients as the candy. This means it must have pecans, caramel in some form and chocolate but it also includes a creamy cheesecake filling. Although cheesecake dates back to ancient Rome I will tell you they never had anything as delicious as a chocolate turtle cheesecake recipe. I am sure this recipe is truly American with the use of cream cheese in most of the recipes rather than ricotta cheese; possibly the creation of Philadelphia brand cream cheese or Cheesecake Factory. Whoever it was that conjured up this luscious dessert, I am grateful to.

This is my favorite chocolate turtle cheesecake recipe.

Combine the crumbs and melted butter; press in the bottom of a 9 inch spring form pan.


Bake for 10 minutes and cool.

Unwrap caramels and combine with the milk in a heavy saucepan over low heat, stirring frequently until smooth.

Pour caramel mixture over the crust; top with the pecans.


Combine the cream cheese, sugar and vanilla in a mixing bowl and mix on medium speed until well blended.

Add eggs one at a time mixing well after each addition.


Blend in the melted chocolate, mix well and pour over the pecans.

Loosen cake from rim of pan by running a knife around the edge; cool before removing rim completely.

Chill until cold before serving. 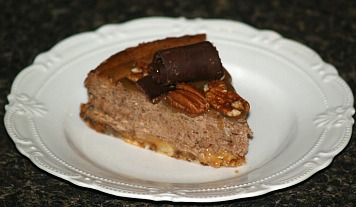 
Although this is called a praline cake recipe, it has all the ingredients for a turtle cheesecake recipe; chocolate, pecans and the brown sugar adds the caramel flavor.


Combine in a large mixing bowl and beat until smooth the cream cheese, brown sugar and flour.


Blend in the vanilla, rum and pecans.

Pour the mixture in the crust and bake for 60 minutes.

Turn oven off, sprinkle top with chocolate chips, open oven door and allow cake to set in oven to cool to room temperature.

Refrigerate until cold before serving.

Beat cream cheese, sugar and 1 tablespoon of the milk until smooth.

Stir in cheese mixture 1 cup of the whipped topping; spread in the crust.

In a bowl beat the pudding mix and remaining milk for 2 minutes.

To serve garnish with whipped topping and chocolate chips.

Wrap a large sheet of foil around the bottom of 9 inch spring form pan.

Combine pecans, 1/4 cup of sugar and melted butter mixing until moistened; press in bottom of pan.

Mix caramels and condensed milk in top of double boiler.

Heat over simmering water until caramels are melted.

In a large mixing bowl beat cream cheese with 1 cup sugar until creamy.

Add eggs one at a time beating well after each addition; stir in vanilla.

Place the cheesecake pan in a larger pan with enough hot water to come up the sides of pan about 1 inch.

Cover cheesecake pan with foil and bake until top of cheesecake appears dry and the center no longer moves; about 1 ½ hours.

Remove cheesecake from water and let cool 2 to 3 hours.

Remove foil from around the pan; cover cheesecake and refrigerate overnight.

Loosen edges with a knife before releasing the sides of pan.

To turn into chocolate turtle cheesecake recipe top with a chocolate glaze or melted chocolate. `

Pour caramel mixture over the brownie crust; sprinkle with pecans.

In a large mixing bowl beat the cream cheese and sugar until creamy.

Add the eggs beating on low just until combined; stir in melted chocolate.

Pour cheese mixture over the pecans; place back on baking sheet in the oven.

Press in bottom and 1 ½ inches up sides of pan; bake 10 minutes.

NOTE: Caramels should be melted and smooth.

Beat in eggs; mix in melted chocolate and pour over the pecans.

Run knife around edge to release cake from pan; remove sides of pan.