I consider Christmas dessert recipes to be something other than my candies, cookies, cake and pies which I make for Christmas. I usually make candy and cookies from Thanksgiving to a few days before Christmas. At this time I package both to give away. Pie making is usually left to the week of Thanksgiving; only occasionally for the Christmas holidays. I love pretty Christmas cakes to take as gifts or to carry-in dinners. These special cakes seem to brighten up the eyes of friends and family. 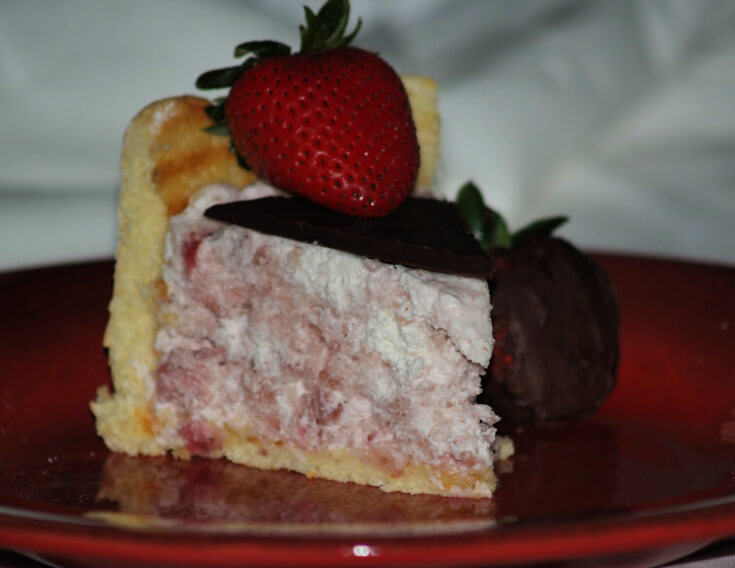 There is a great time for me to make “luscious looking” Christmas dessert recipes. The holiday season is the most active time for socializing. Friends and family seem not to be as busy and they love stopping by for a cup of coffee. A special dessert goes well with that hot cup of coffee and is always greatly appreciated. Now I must add that guests can always help themselves to the cookies, candy and anything else from the kitchen. Many times in years past relatives have stopped by when I was in the middle of packaging my Christmas treats. Of course they got to sample them. This is what makes the holidays special!

I do not make nearly as many Christmas dessert recipes each year like I do other recipes. When I do make Christmas dessert recipes I want them to be extra special. I like to serve them at home because many have to be kept cold and some even frozen.  Even in cold weather, there is something warming when served with a hot cup of coffee. These desserts are prepared with the thought of who would be coming by for coffee. I think about the taste and presentation when preparing them for these special people. 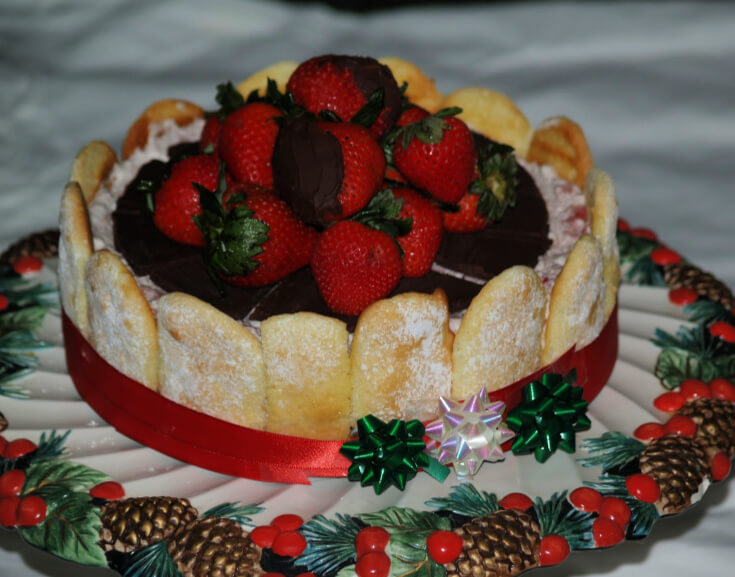 Elegant Christmas dessert recipes are made with chocolate and strawberries.
Crust 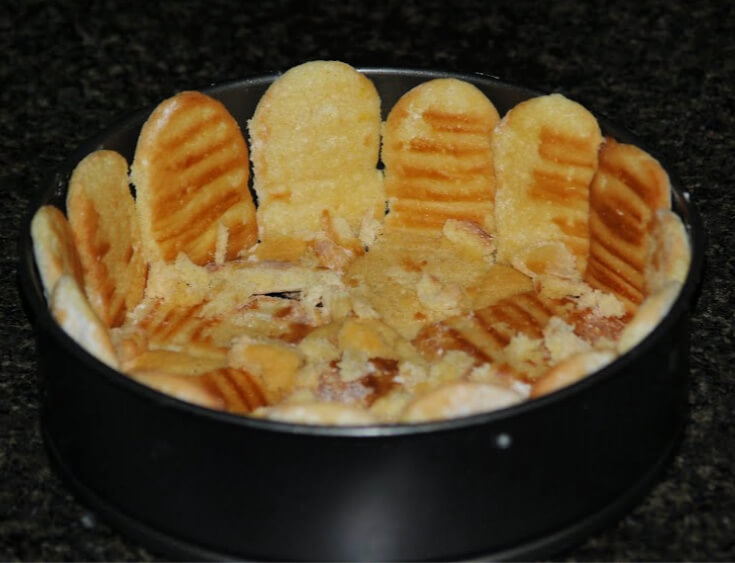 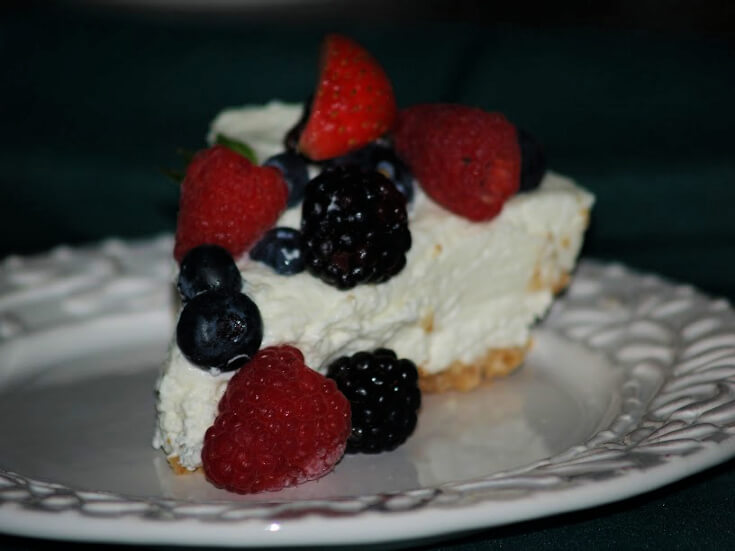 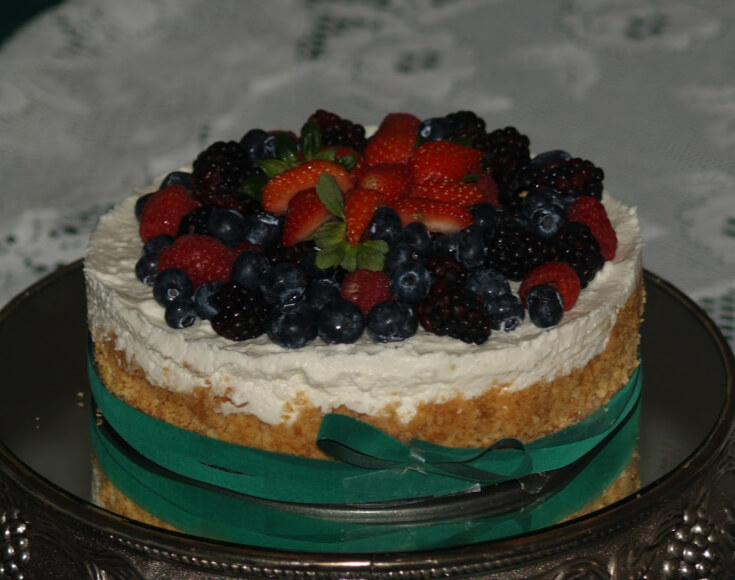 Pumpkin is a favorite among Christmas dessert recipes.

Many of my Christmas dessert recipes are made with gelatin.

Place lemon juice in a small saucepan; heat over low until hot.
Sprinkle gelatin over the top; stir in sugar and cool slightly.
Pour the cold milk into a large bowl; beat until thick and foamy.
Beat in the buttermilk, gelatin mixture, lemon rind and coloring.
Pour into a dampened 1 quart ring mold; chill until set about 4 hours.
Dip bottom of mold into hot water up to rim for a few seconds.
Unmold dessert onto a serving plate.
In small bowl beat the egg white until stiff; whip the cream until stiff.
Fold the cream into the beaten egg white; set aside.
Hull the strawberries and fit some in the center of the ring,
Pipe the cream mixture on top and around the base of the ring.
Decorate with remaining berries and serve immediately; serves 6.

Trifles are popular Christmas dessert recipes in many countries.

In a small bowl combine the cornstarch and Grand Marnier; set aside.
In top of double boiler combine yolks, sugar and vanilla.
Place over simmering water and whisk constantly to 140F degrees.
Add cornstarch mixture stirring until thickened; remove from heat.
Add grated peel stirring until mixture begins to cool.
FOR TRIFLE place a THIRD of the sauce in bottom of a large trifle bowl.
Layer a THIRD of the cake cubes on top of the sauce.
Top cake with a THIRD of the Clementine segments.
Top Clementine segments with a THIRD of the whipped topping.
Repeat layering until all ingredients are used; end with clementines on top.
Refrigerate until ready to serve; serves about 12.

FOR PUDDING combine butter and sugar in a large bowl.
Beat with mixer on medium speed until light and fluffy.
Add yolks one at a time beating well after each addition.
Add suet and molasses beating mixture is light and fluffy.
Turn mixer to low speed; beat in flour, salt, baking powder and spices.
NOTE: When batter is well mixed it will be stiff.
Beat egg whites in small bowl with mixer on high speed.
NOTE: Always use clean bowl and beaters for egg whites.
Beat whites until stiff peaks form; fold into batter.
With wooden spoon stir in raisins, prunes, fruit and cranberry sauce.
Spoon into well greased 2 to 2 ½ quart pudding mold; seal tightly with lid.
NOTE: Seal tightly with a lid or foil tied with string.
Place mold on trivet in large kettle.
Add boiling water to cover THREE FOURTHS up sides of mold.
Cover and steam over low heat 4 hours; add more boiling water if needed.
FOR BRANDY SAUCE combine butter and sugar in small mixing bowl.
Beat on medium speed of mixer until light and fluffy; add nutmeg.
Increase speed to high; gradually beat in brandy in a thin stream.
Beat about 3 minutes until brandy sauce is light and fluffy.
Spoon brandy sauce into a serving bowl, cover and refrigerate.
Carefully remove mold to a wire rack and uncover.
Place serving plate over the mold; carefully invert gently removing mold.
FOR FLAME heat brandy in a small heavy saucepan over medium low heat.
When vapor rises, ignite carefully; ladle flaming brandy over pudding.
Serve pudding with brandy sauce; serves 16.

Combine the amaretto and marshmallows in top of double boiler
Bring the water in bottom to a boil; place top on.
Cook until marshmallows are melted stirring occasionally.
Stir in almond extract, cherries and lemon juice; cool slightly.
Beat the whipping cream to stiff peaks; fold into amaretto mixture.
Spoon evenly into pretty individual serving dishes; garnish with almonds.
Serves 8.

Bread puddings with bourbon make great Christmas dessert recipes or dessert for any time of the year.
Bread Pudding

Preheat oven to 350F degrees; butter 8 inch square cake pan.
Place bread cubes in prepared pan; set aside.
FOR PUDDING combine in small bowl the melted butter and next 5 ingredients.
In a large bowl beat the eggs until frothy; add pecan mixture mixing well.
Stir in the milk and raisins; pour over the bread in prepared pan.
Toss bread gently; let stand about 35 minutes to soak up egg mixture.
TO MIX TOPPING combine pecans, sugar and cinnamon in small bowl; set aside.
Sprinkle topping over the pudding; bake another 10 minutes until set and lightly browned.
FOR BOURBON SAUCE melt butter in small saucepan over medium heat.
Stir in sugar and cornstarch; cook and stir until dissolved.
Whisk in cream and vanilla; cook and stir 1-2 minutes until slightly thickened.
Stir in the bourbon; cook and stir about another minute.
Remove sauce from heat and cool slightly; spoon over servings of pudding.
Serves 6-8.

What could be more delicious for Christmas dessert recipes than chocolate?

Mix together melted butter and crumbs.
Set aside and reserve 2 tablespoons of the crumbs.
Press remaining crumb mixture in bottom of 9 inch square dish.
NOTE: Refrigerate about 15 minutes to firm crust.
Cream the ½ cup butter and powdered sugar together.
Add eggs one at a time beating well after each addition.
Spread mixture over the crumb crust in dish.
Combine the sugar, cocoa and cream; beat until stiff.
Fold in nuts and fruits; spread over the mixture in dish.
Sprinkle reserved crumb mixture over the top.
Refrigerate overnight or freeze; serves 10-12.

Cranberries and apples together are great for Christmas dessert recipes.