How to Make Christmas Fudge Recipes

Learn how to make Christmas fudge recipes. They can be made special by adding other ingredients like candied fruit, various nuts, coconut and fruit flavors. Throughout the year when we get a sweet tooth, fudge recipes are the easiest of the candies to make so for holidays we want to give it a little flair. Making this fudge a little more special makes a celebratory presentation with the hard candies, peppermint, brittles and taffy.

There are so many kinds of fudge recipes to choose from; some very easy and some requiring a little more work. Once the boiling begins, unless instructed in your recipe, do not stir the mixture; it may cause a granular texture.

Once the fudge recipe has cooled to warm it is necessary to beat it to make it creamy and smooth. The beating should continue until it is almost firm and then spread in buttered or oiled pan to cool completely. Marshmallow cream is added to many recipes to make it softer and creamier; this is good to add if the mixture has been overcooked and hard.

I learned how to make Christmas fudge recipes starting with this easy one with no cooking. It is delicious and creamy smooth with the addition of cream cheese.

Stir in chocolate and vanilla and beat well; stir in chopped pecans.

When cold cut in squares.

HOW TO MAKE CHRISTMAS FUDGE RECIPE

I learned how to make a Christmas fudge recipe like the one below; it is made with lots of candied fruit and lots of nuts. 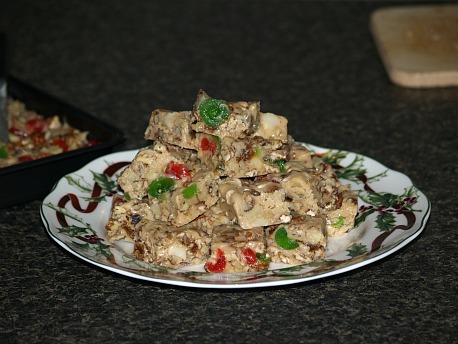 How to Make Christmas Fudge Recipes

NOTE: Have a very large bowl or pan ready for mixing the nuts and fruit with cooked mixture. Have soft butter ready for your hands so the candy doesn't stick to you when pressing in the pan.

In a large heavy saucepan over low heat combine sugar, corn syrup, salt and cream; stir until sugar is dissolved.

Cover pan and bring to a boil; boil 1 minute or until all sugar crystals on sides have melted.

Remove from heat and add vanilla; with mixer beat until creamy and holds shape. 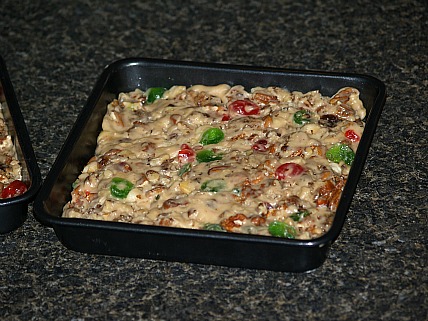 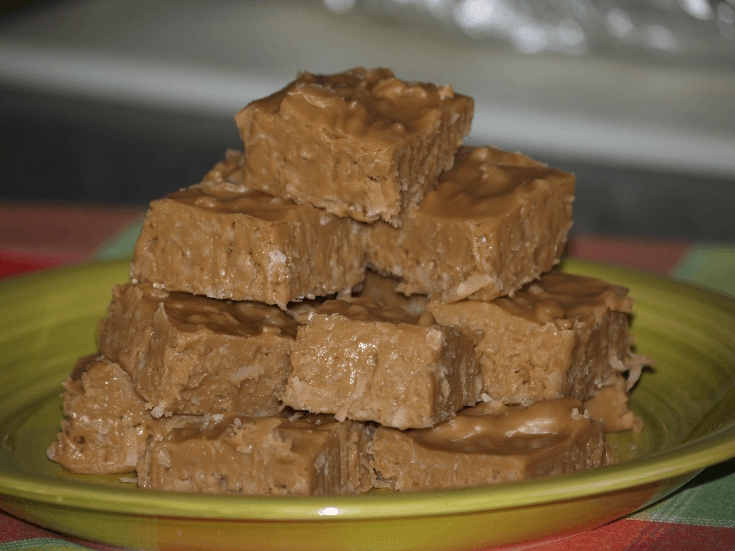 The maple flavor made by using brown sugar combined with coconut is a great addition to your Christmas fudge recipes.

Combine in a heavy saucepan sugar, cream and corn syrup.

Over medium heat bring to a boil stirring constantly to dissolve sugar.

Without stirring cook mixture to a soft ball stage about 235F degrees on thermometer.

Set pan off heat and let cool to lukewarm.

Beat candy until light; stir in coconut and vanilla.

Pour mixture into a butter dish or an 8 inch square pan.

Bring mixture to a boil and boil until soft ball stage 238F degrees stirring only enough to keep from scorching.

Remove from heat and cool to 190F degrees; add candied orange peel and beat until heavy and thick.

Pour into a buttered pan and mark squares.

Stir over medium heat until sugar is dissolved and mixture boils.

Remove from heat and let set to lukewarm; add vanilla and beat until mixture begins to lose gloss and hold shape.

Quickly stir in nuts and cherries and turn into buttered pan; let set until firm then cut.

Bring mixture to a rolling boil; reduce heat and cook to 234F degrees, without stirring.

Remove from heat and add butter and vanilla; do not stir.