The popularity of Christmas log cake recipes has exploded since the original one. Occasionally I come across writings that claim this cake has been around since ancient times. I have seen no proof that it has been around any earlier than the nineteenth century. The original Buche de Noel or Yule log cake is French. It seems that the first was made with sponge cake and ganache. 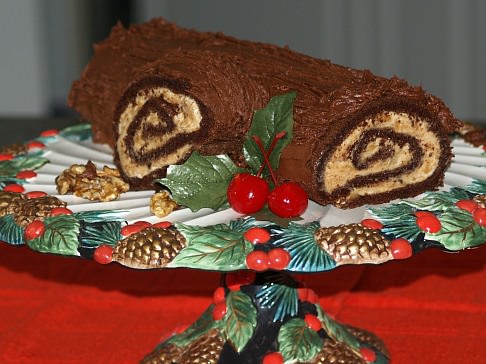 NOTE: For this Christmas log cake recipe I used the chocolate cake recipe, the peanut butter filling recipe and I doubled the recipe for chocolate glaze recipe #1.

I only came across and learned how to make these Christmas log cake recipes in the latter half of my life. The Buche de Noel or Christmas Yule log cakes which I tasted were all very good. I also love how they can be decorated to make pretty presentations for the holiday season.  Traditionally the filled cake is rolled up “jelly roll” style. The traditional one also has one end cut off and affixed to the main log. This is done to resemble a cut off branch but many bakers choose to make it a “straight log”. For the finishing touch tines of a fork are dragged along the outside frosting making it to resemble bark on a tree.

Since the origination of the French Buche de Noel, these cakes have become a favorite around the world. Many Americans have learned how to make Christmas log cakes in all kinds of flavors and designs. These rolled “log” cakes have even become favorite cakes outside of Christmas due to the great taste. It is simple to change the decorating from Christmas to any special occasion.

The key “step” in learning how to make Christmas log cake recipes is the handling after baking. Immediately after removing the cake from the oven, it is turned out onto a clean dish towel. Some recipes instruct you to dampen the towel or dust it with powdered sugar. It is important to follow your recipe’s instructions. As soon as the cake is placed on the towel, it is rolled up “jelly roll” style and let to cool. After the cake cools, then you can add the filling, frosting and decorations.

NOTE: These Christmas log cake recipes (Almost always) MUST be placed in the refrigerator or freezer after filling them.

Stir together flour, baking powder and salt; set aside.

Beat yolks and vanilla on high speed for 5 minutes until thick and lemon colored.

Fold yolks into egg whites; sprinkle flour mixture 1/3 at a time over the egg mixture folding in lightly.

Immediately loosen around edges of pan; turn out onto a clean towel dusted with powdered sugar.

At short end roll up cake and towel like a jelly roll; place on rack to cool.

Reroll cake without the towel.

Frost roll EXCEPT for the cut side of the small piece.

Use a knife or fork to draw lines through the frosting making the appearance of bark; chill.

Add flour mixture alternating with water and vanilla to the egg mixture on low speed until smooth.

Bake cake for 15 to 18 minutes until top springs back lightly touched. 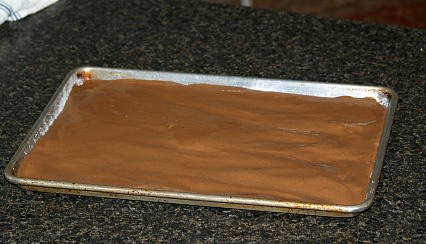 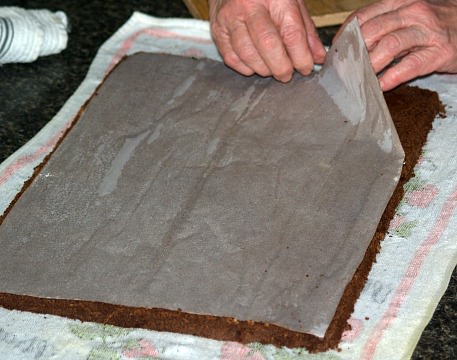 Turn Out on Towel and Remove Wax Paper 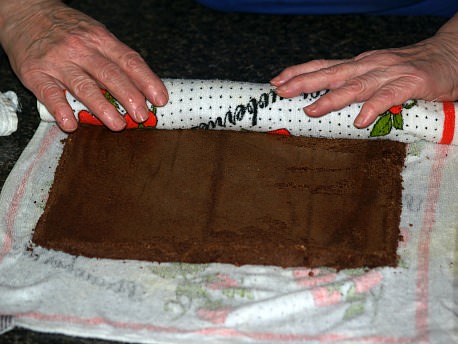 Roll Up Jelly Style in Towel

NOTE: When I reroll this cake, I place a piece of WAX paper on top covering the cake before rolling to keep it from sticking. Wax paper is thinner and works better than parchment. 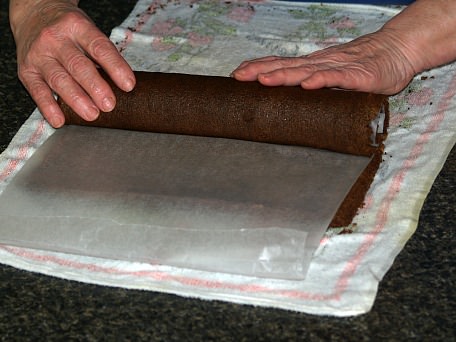 Unroll cooled cake and spread with choice of filling; reroll. 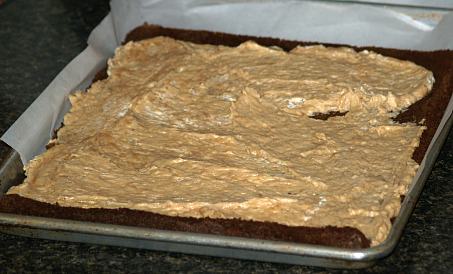 IN TOP of double boiler over simmering water place chips, milk and marshmallows.

Stir until marshmallows and chips are melted; cool to lukewarm.

COMBINE AND BEAT together cream and sugar until stiff peaks form; blend in vanilla and brandy.

Fold in walnuts and candied cherries; unroll cake, spread on filling and reroll.

MELT CANDY with cream in a heavy saucepan over medium low heat stirring constantly until smooth.

Remove from heat and stir in rum; cool to room temperature.

Combine ½ cup of syrup, cornstarch and syrup in small saucepan; blend until smooth.

Cook and stir mixture over low heat until thickened and begins to boil; add chopped cherries.

Unroll cake and spread with jam mixture; spread cooked mixture over the top and reroll cake.

COMBINE AND BEAT together cream cheese, butter and vanilla.

Add sugar and beat until well blended; stir in nuts if desired.

It takes only half of this recipe to fill Christmas log cake recipes. Make half of the recipe OR use it to frost the roll.

RECIPES FOR GLAZES AND FROSTINGS for Christmas Log Cake Recipes; choose for any Buche de Noel

Stir mixture in saucepan constantly until mixture thickens; DO NOT BOIL.

Remove from heat and cool slightly; blend in sugar and vanilla.

NOTE: This thickens as it cools so if you want it thicker to spread let it cool.

COMBINE IN TOP of double boiler over hot water the chocolate and shortening.

Spread over top and sides of cake.