How to Make Colcannon Recipe

I learned how to make a Colcannon recipe and the Dublin coddle which are two of the traditional Irish recipes made made their popular potatoes.

The first recipe is my version; like all recipes, each person has their own way of preparing them. This one is my favorite; I prefer the kale over the cabbage and I love the sausage with the mashed potatoes. (I have to say the potatoes and cabbage are also very good.) It seems that all the traditional Irish recipes of this dish contain potatoes and some kind of greens. From these basic ingredients, many other ingredients can be added and the preparation can vary. I start mine with a delicious mashed potato recipe. I have never tasted this dish made by an Irishman, but I do think mine is delicious!

I don’t know about you, but I love anything with potatoes in it whether it is Irish appetizers, lamb stew or even Irish cookies. Every Irish meal must have Irish potatoes. I could be Irish! The Germans are like that too. Mom use to say if she had a little meat and lots of potatoes, she could always cook a meal. I think this is so true. I learned how to make the colcannon recipe before the Dublin coddle, but both have been favorites in Ireland for many generations. It is like an Irish stew but usually made with sausage, ham or a combination of pork. It is seasoned with onions and of course it must have lots of chopped potatoes. These hot dishes, especially thick hot Irish stews are a welcome sight on cold damp days.

NOTE: As a point of interest, I have been told that colcannon traditionally is a “community” dish. Instead of each person at the dinner table having their own dish, all will eat from the same dish.

COLCANNON RECIPE (made with kale) 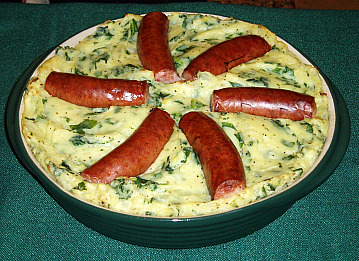 How to Make a Colcannon Recipe

Cover potatoes with water in a large heavy sauce pan. Add 1 teaspoon salt. Bring to a boil, reduce heat and cook until potatoes are tender. (Check by sticking potato with a fork and potatoes should be soft.)

While potatoes are cooking, bring water to a boil in another pan. Dump the chopped kale into the boiling water. Boil for three minutes. Drain all the water off thoroughly and set aside. Melt butter in a skillet. Dump into the butter the chopped onion. Sauté onion until it is tender and set aside.

When potatoes are finished cooking dump into a colander to thoroughly drain off the water. Dump potatoes into a large mixing bowl. Slowly beat the potatoes until broken down. Increase speed of mixer and gradually add the butter and onion to the potatoes. Whip the potatoes until fluffy. Add salt and pepper to taste. Remove bowl from mixer and add the drained kale to the mixture. Blend in with a large spoon. Spoon mixture into a baking casserole dish. Arrange sausages on top of the potato mixture, pushing them slightly down into the potatoes. Place dish in the oven and bake for 25 to 30 minutes or until top begins to slightly brown. NOTE: This recipe is great warmed over. It is easier to cut when cold and the flavor is stronger when warmed up. Just throw it in the microwave for a couple minutes.

COLCANNON RECIPE (made with cabbage)

Cook potatoes in boiling salted water about 20 minutes or until tender; drain well.

Place potatoes in mixing bowl and mash; on low speed beat as adding milk, salt and pepper until fluffy.

Combine cabbage and onion mixture with the whipped potatoes.

COLCANNON RECIPE (Also made with cabbage) 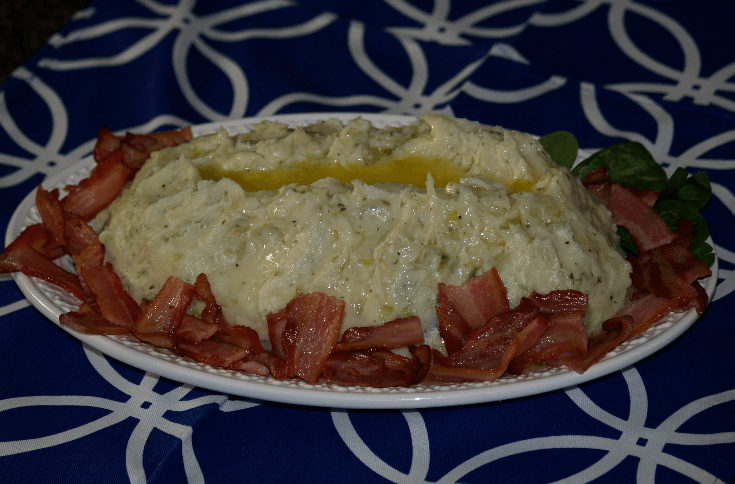 Colcannon Recipe made with Cabbage

This colcannon recipe is very similar to the one above. I still want to share it with you because it includes bacon and is very good.

Drain bacon on paper towels; set aside and keep warm.

Cover potatoes with lid and cook until tender.

Place cabbage in another saucepan; add only enough water to keep from sticking.

When potatoes are tender, drain thoroughly and place in mixing bowl.

Pile potato cabbage mixture high on a serving platter; using back of spoon make a well in the center.

Cut cooked bacon in bite size pieces; arrange around the pile of potatoes.

Drizzle the melted butter in the well and on top of the potato mixture; serve immediately.

After I learned how to make the colcannon recipe, this  is the Dublin coddle recipe that I learned to make.

Boil ham and sausage for 5 minute and drain; skim fat off liquid and reserve.

You will like these potatoes almost as much as the colcannon recipe.

Dot top of potato with butter and seal foil.

Top with sour cream or sprinkles.

This is a hearty colcannon recipe for a hot delicious soup to warm you up on cold days. I would double the recipe!

Sauté bacon in a large pan about 3 minutes; stir in onion, potato, leek and cabbage.

Cover pan with lid and simmer over medium low heat until vegetables are tender about 10 to 12 minutes.

Increase heat and add chicken stock to the mixture; bring to a boil.

Reduce heat; stir in cream and season with salt and pepper.

Stir over medium low heat until hot; DO NOT BOIL.