I believe cooking Chinese chicken recipes are as popular here in the United States as it is in any country of the world, including all the Asian countries. Everyone I know loves the flavor of good Asian food. This is so true that some of the “Chinese” recipes are attributed to this country; like chow mean, chop suey and General Tso chicken recipe. I love all of these and for years ordered them when eating out and not really knowing the history behind the recipes.

I have been cooking Chinese chicken recipes for many years and the story behind the General Tso chicken recipe is one that I find truly amazing. This dish is very delicious; one that I love. This recipe has a slightly sweet and spicy sauce with deep fried dark meat chicken. Although it is named after General Tso the roots to this recipe is to New York; the general’s family claim they never heard of this dish.

Like most cuisines, when cooking Chinese recipes, there are many regional influences.  The Chinese cuisine is divided into four different areas. The Peking style is from the Northern part of the country. This type of cooking is characterized by sweet and sour sauces, wine based stocks, hoisin sauce, garlic, sesame oil, green onions and lots of soy sauce. These seasonings can be mild or strong.

Cooking Chinese chicken recipes from the eastern region, the Shanghai style of cooking can be simple or more complex. This area is called the “heartland of China” with many dishes of soups, vegetables, seafood, meat and poultry. The chicken recipes are rich and savory with a plentiful use of sugar, soy and wine.

Most of the nineteenth century immigrants arrived in the United States from the Canton region or the southern region. This region shows the greatest variety of any of the regional cooking utilizing all their local ingredients; fruits, vegetables, seafood and meats. This area is famous for their stir fry recipes and sauces like oyster, lobster and black bean.

My favorite when cooking Chinese chicken recipes is the southwest region; the Szechwan & Hunan cuisine; Hunan is considered the spiciest. The spicy hot seasoning of this area won me over! The semitropical climate of this region is favorable for growing peppers and other spices; it is also influenced by the cuisines of Burma, Pakistan and India.

When cooking Chinese chicken recipe, you will find many originated right here in the United States. 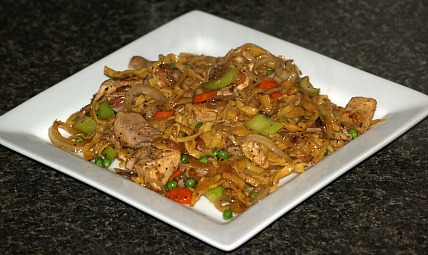 Cooking Chinese chicken includes a lot of stir fry recipes; even ones latter covered with sauces start out as stir fry.

Heat oil in large wok; stir fry chicken 1/3 at a time until brown on all sides and remove to platter.
When all chicken has been browed, return to wok.
Mix in 1 cup water, celery and onions; bring to boil and simmer about 20 minutes.
Blend cornstarch with ¼ cup water, soy sauce and molasses; stir into meat mixture.
Cook and stir about 2 minutes; stir in bean sprouts and water chestnuts.
Serve over fluffy hot rice.

ORANGE CHICKEN RECIPE (A Szechuan chicken recipe) I have been cooking Chinese chicken for years with this recipe; I love this flavor with chicken or beef.

With vegetable peeler cut peel from orange into 1 ½ inch wide pieces ‘do not cut into white membrane.
Cut pieces into 1 ½ inch long strips.
Place peels on cookie sheet and place in oven at 200 F degrees for 30 minutes.
Cut chicken into 1 ½ inch pieces.
In medium bowl combine and mix chicken, soy sauce, sherry, green onions, red pepper and ginger.
In a small bowl combine and mix cornstarch, sugar, salt and orange juice, cover both and refrigerate.
Fifteen minutes before serving heat oil in large skillet stir fry orange peels until crisp and edges are slightly brown.
With slotted spoon move peels to paper towels to drain.
In remaining oil in skillet over high heat stir fry chicken mixture until no longer pink and chicken is tender about 4 minutes.
Stir orange juice mixture and then add it to chicken and stir fry until mixture is slightly thickened.
Spoon onto warm platter; sprinkle with the peels.

All who are cooking Chinese chicken recipes make sesame chicken at some time; it is easy to make and so good.

Preheat oven broiler.
Mix mayonnaise and oil; place chicken on rack of broiler pan.
Brush chicken with half of mayonnaise mixture.
Broil 5 to 7 inches from heat source about 8 minutes.
Turn chicken over and brush with remaining mayonnaise mixture.
Continue broiling for 8 to 10 minutes longer until tender.
Sprinkle with sesame seeds.

This is not exactly cooking Chinese chicken but I included it because it has some of the same ingredients with similar taste.

Combine cabbage, onion and celery in large shallow skillet with the water.
Cook on high until vegetables are tender crisp; drain off liquid.
Add the chicken, soy sauce, nuts and drained pineapple chunks with reserved juice.
Cook until boiling and flavors blend; adjust salt and pepper.
Serve with rice.

Cooking Chinese chicken can also get the same flavors if grilling outside; use this teriyaki seasoning outside or in.

I love the flavor of coconut, even when cooking Chinese chicken recipes.

Remove skin from chicken; rinse chicken and pat dry.
Drain pineapple reserving juice; set pineapple aside.
Combine pineapple juice pina colada mix, rum. Soy sauce, ginger and garlic in bowl.
Place chicken in shallow pan; cover with marinade mixture.
Cover and place in refrigerator for a couple of hours turning the chicken frequently.
Remove from refrigerator and set at room temperature while oven is heating.
Preheat oven to 350F degrees.
Place pineapple sliced on the chicken and place in oven; bake for 30 minutes.
Sprinkle coconut over top of chicken and bake additional 15 to 20 minutes or until chicken is tender.

Cooking Chinese chicken is easy simply by marinating chicken in this recipe.

Combine all ingredients; add chicken.
Cover and chill for 1 hour; drain from marinade.
Cook as desired; great for grilling.

Cooking Chinese chicken can be easy with many recipes.