Cooking for a Large Crowd

If you are going to be cooking for a large crowd, the best tip is to plan and schedule. To me a large crowd is fifty or more guest. Depending on what you are serving, doing everything alone, a large crowd could even be ten or twenty people. Despite the extra work, I choose to work by myself if it is not family. The more people around, it seems the more chaos abounds, especially if your kitchen is small. This is just my thoughts but maybe you do not feel the pressure from having too many helping to cook. If you have help, assign different jobs like making the salad, preparing the bread or the responsibility of the dessert to different people. Perhaps each could use their own kitchen. 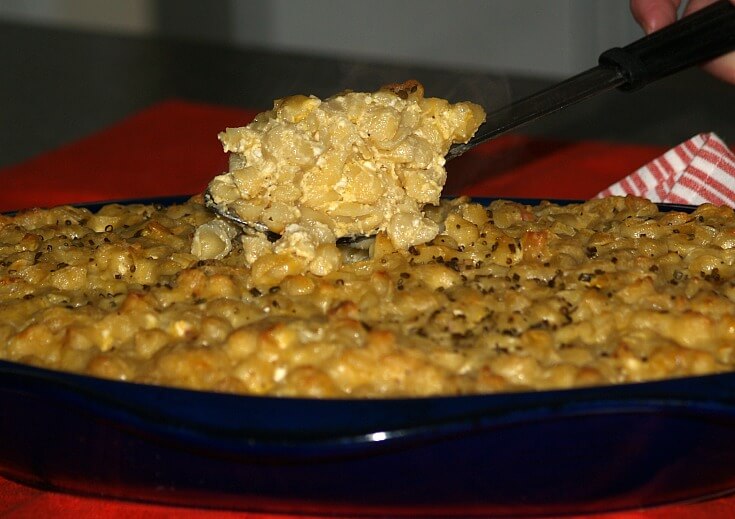 Cooking for a Large Crowd

When Mom, Dad and all my siblings were still living our family perfected cooking for a large crowd. We had so many gatherings throughout the year and always had lots of food. Dad usually kept a list of what each person volunteered to bring. Many of our picnics included extended family and friends. There were two gatherings each summer where hundreds were in attendance. Each individual family brought food and it was all put together on many long tables; all were good cooks.  For our family, we would gather and cook for a week or two. Back then it was easy because our family worked well together.

Cooking for a large crowd was fairly common for me as an adult having four children. When my children were teenagers I cooked quite often for the gymnastic and football teams. First, I considered what types of food these kids would like. For both groups, it seemed pasta was the favorite. Next I figured how much food would be necessary. Of course the requirement for a mostly female gymnastic team was far less than the requirements to feed big strong all male football team.

My menu ended up being a pasta dish, salad, bread, dessert and drink. Many pasta recipes and casseroles are good because they can be prepared in advance. They can be prepared a day or two ahead and stored in the refrigerator. When cooking for a large crowd, some recipes can even be made weeks ahead and frozen. Casseroles can be made in large disposable roasting pans, stored and go directly to the oven for heating. They can be made deep to feed more and simply spooned out instead of cutting pretty squares. Believe me, the taste is everything. Especially young people do not care if they are not neatly cut in square servings.

Although I did all the cooking in my little kitchen, parents helped by often providing large cans of sauce and drinks. Canned sauces and other prepared ingredients really help when cooking for a large crowd. It was much easier than cooking my own. For the football team, time was of essence; only twenty minutes to get them fed and out. A few moms along with my daughter and her friends made serving quite easy. We always met our time restrictions and every meal went off without a “hitch”. This was only done with efficient planning and starting early enough.

Providing food for a wedding almost always require cooking for a large crowd. After joining the army my middle son and girlfriend decided to marry so she could go with him after basic. It just happened to be at Easter time and nothing was available. We decided to have their wedding in our back yard. I had about 2 weeks to prepare. The first thing I did was to make and freeze the wedding cake. I frosted each two layer section without adding decorations and placed in freezer.  It was easy to remove from freezer two days before the date, decorate and assemble. Worked perfectly!

Everything which could be frozen, I made next. I shaped an ice bowl so I could fill with shrimp. I cleaned and cooked the shrimp and placed in the freezer. By the way, I found people love shrimp!  If you include shrimp in your feast count on LOTS. I fixed all kinds of food and large amounts. I baked a ham in advance, sliced and stored in refrigerator. Most salads and vegetable dishes were prepared a day or two in advance. Hot vegetable dishes were reheated quickly in the microwave. Roast turkey, dressing, potatoes and other hot items were readied the same day of the wedding starting early in the morning.

One very important issue when cooking for a large crowd is to consider your storage. Make sure you have enough refrigerator and freezer space. I have always had two refrigerators and a very large freezer.  For short term storage for some items I have used large coolers packed with lots of ice. I have even rented an extra refrigerator before. You must be careful of how you store the food because you certainly would not want anyone getting sick.

NOTE: When preparing recipes ahead, I have found it VERY HELPFUL to make notes and tape to each container in storage. I included the name of the recipe, how to heat like oven temp, stovetop, microwave and time, any final ingredients needed like cheese or breadcrumbs on top before final baking, etc., garnishes or like serve with whipped cream. Include everything you would need to remember.

You might like to use some of your favorite family recipes when cooking for a large crowd. Usually this is easily accomplished when keeping a few tips in mind. To make your family recipes larger simply multiply the ingredients. This can be an additional half of the recipe to five or six times the recipe. I must add that there are recipes which should not be doubled. They just do not turn out as well. I found these recipes to mostly be desserts and cooked candies.

Consideration must be given to the weight, density and the recommended cooking temperature of the original recipe if cooking for a large crowd. When increasing the recipe, cooking time must also be increased. For many recipes it is best to undercook rather than overcook. In today’s world with microwaves, many foods can be placed in microwave oven for a little additional cooking. Of course, there are exceptions to this; large cakes, breads, desserts, etc. cannot be returned to any oven for more baking.

When cooking for a large crowd, remember large size recipes need large containers for mixing and large baking dishes and pans in width, length and depth. If you have increased a recipe by another one half, allow one third extra cooking time to the recipe. If you have doubled the recipe, add half the original cooking time to the recipe. Whatever recipe you are using, cover as directed and stir or rearrange as directed. If recipe instruct a standing time before cutting or serving, increase the time. For example for poultry or meat, increase the time by five minutes per pound. When cooking these large quantities in the oven, check them occasionally.

NOTE: Something to remember is the more you have done in advance will make the final hours much more enjoyable.

Perfect Recipes when Cooking for a Large Crowd 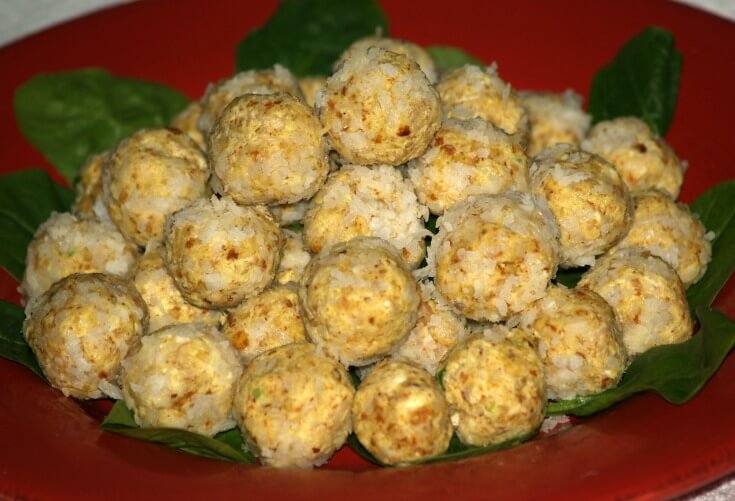 This appetizer is easy and flavorful if cooking for a large crowd. These can be made in advance, cover tightly and serve directly from refrigerator.

Cream together cream cheese and mayonnaise.

Roll each ball into grated coconut; refrigerate to firm before serving. 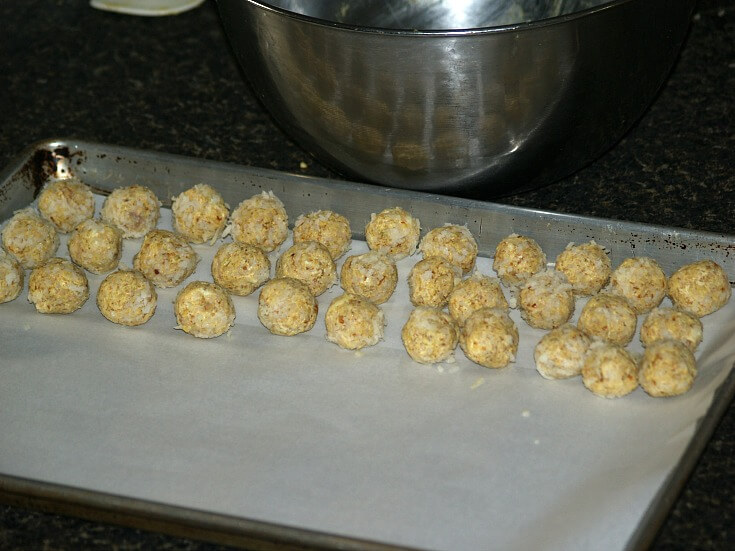 I like this appetizer when cooking for a large crowd because it is easy to prepare ahead and heat before serving.

Blend mixture well; fold in the sour cream and spread in a large shallow pan.

Melt butter and heat the pecans in the butter; sprinkle over the cheese mixture.

NOTE: At this point you can cover and refrigerate until ready to heat.

TO SERVE place in hot oven at 350F degrees until thoroughly hot about 45 minutes.

Serve with crackers or dry toast pieces; serves about 50.

When cooking for a large crowd fish is usually good because it is so “quick” cooking. Prepare in pans ahead, store in refrigerator and pop in oven when needed.

Oil baking trays (Depending size of trays how many needed).

Place fish on trays in single layer; coat each fillet with a little tartar sauce.

Sprinkle each filet with a squeeze of lemon juice

NOTE: Can be wrapped tightly and stored briefly (Few hours) in refrigerator.

Bake in hot oven at 400F degrees about 25 to 35 minutes until fish flakes when tested with fork.

Rice pilaf goes well with fish if cooking for a crowd.

Place in oven; when butter melts stir contents until vegetables and rice are coated.

Add the chicken broth, and remaining ingredients to the pan; blend well.

Bake uncovered until all liquid is absorbed and rice is tender about 60 to 70 minutes.

TO SERVE Dip rice with ½ measuring cup and invert onto individual serving plates.

When cooking for a large crowd as with all meals, people look forward to a good dessert like this.

Tear all bread into 1 inch pieces in a bowl.

Combine bread with buttermilk and raisins; set aside.

Melt butter in a large baking pan (roaster or disposable roaster is good).

Pour bread mixture into the pan of melted butter.

Bake 65 to 75 minutes until set stirring 1 time while baking.

NOTE: Pudding should be set but moist.

Cook over medium heat until the sugar dissolves and sauce begins to thicken (About 10 minutes).

Gently stir in the rum; makes about 2 ½ cups. 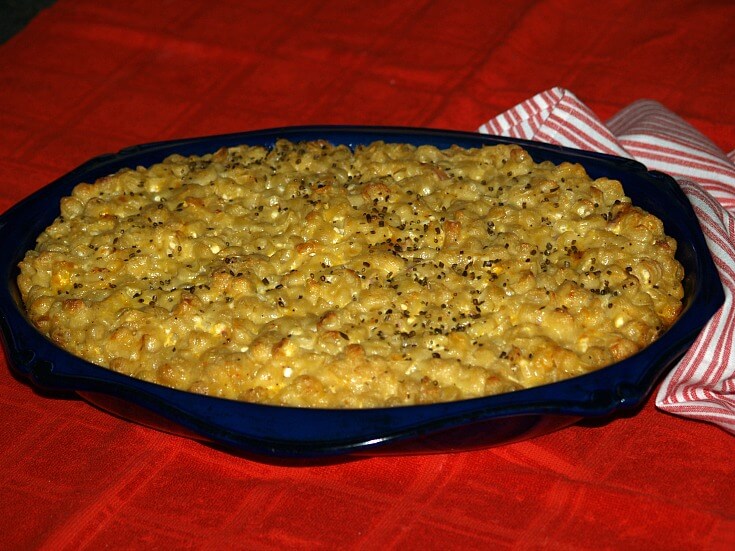 Macaroni and cheese is a favorite and economical when cooking for a crowd.

Cook macaroni according to package directions (Until tender); drain.

NOTE: Stir macaroni once during baking.

Serves about 32 (People love macaroni and cheese so plan for extra.)