Cooking turkey giblets and the neck is a very simple process and they make a great broth for the stuffing, gravy, noodles or anything else. Place all the pieces, except the liver in a large saucepan and cover with water. If you are going to use the broth for noodle or the like, you might want to chop a little onion and a little celery in the pot for added flavor. Bring the liquid to a boil, reduce heat and simmer until tender; about 1 ½ hours. Add the liver to the pot during the last half hour of cooking. If you do want to make a broth, you can throw the pieces in the baking pan when you are cooking frozen turkey.

If you are cooking frozen turkey and want to speed up the time, they can be thawed in the microwave. Check the microwave manual to see what size will fit in your microwave. If you choose to thaw the turkey first in the microwave, it must be cooked immediately; not refrozen or refrigerated. Unwrap the turkey first and place it skin side down in a baking dish to catch all the drippings. A frozen turkey breast can be easily defrosted in the microwave. Like a whole turkey, unwrap it first and place skin side down in dish. Defrost 3 to 6 minutes per pound at 50% power. Rinse breast in cool water and let set to cool 5 to 10 minutes.

COOKING FROZEN TURKEY UPDATE 2012: I have often said that I like cooking frozen turkey just as well as I do the fresh turkeys; that was until now. After buying 60 to 70 turkeys for my personal use in my lifetime, this year I have decided never to purchase a frozen turkey again. After thawing my turkey this year, I discovered a “real butchering job” was done on this turkey. The cavity was enormous and the leg was almost cut off. Immediately I knew a nice presentation would be out of the question. 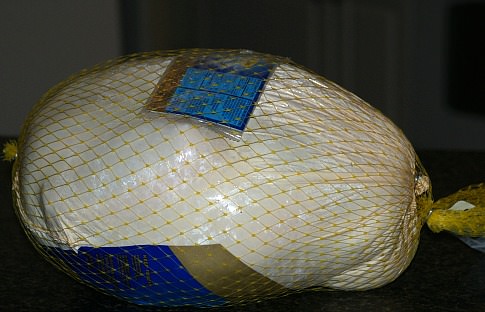 After cleaning and tying this turkey quite tightly to prevent any more spreading I proceeded to roast the turkey. After the turkey finish roasting, the amount of water which drained from the turkey was extreme. I say water because it WAS NOT the rich broth which I normally had. My 21.86 pounds of turkey looked quite small now. I decided to weigh it; my turkey now weighed 14 pounds. I know some of this was natural juices which I like for my gravy and stuffing, but not this much. At eighty eight cents a pound, this liquid cost me $6.91.

It is obvious to me that too much water is being pumped into the frozen turkeys now. I discussed this problem with a few other people across the country and it seems they also experienced similar problems with their turkeys and of not having a good taste. Everyone said they never had this problem before.

If you choose (opting not to be cooking frozen turkey) to thaw your turkey first, here is a delicious turkey brine recipe.

HOW TO COOK TURKEY BREAST FLORENTINE

If you are cooking frozen turkey breast, it will have to be thawed first for this recipe.

Cook bacon in large skillet until partially crisp; remove bacon and set aside.
Cut 4 slices of toast in half diagonally.
Place 1 cut slice (2 pieces) down on oven proof plate and 1 whole slice in the center on top.
Repeat with remaining toast; 1 cut piece of toast and 1 whole piece on three more oven proof plates.
Top toast with turkey, tomato, cheese sauce, bacon and Parmesan cheese.
Bake at 400F degrees until bacon is crisp and sauce is bubbly; about 15 minutes.

Deep fry wings in hot vegetable oil until brown on all sides; arrange in 10 X 15 roasting pan.
Combine soup, salt, paprika and pepper; spoon mixture over wings.
Cover pan and bake in preheated oven at 350F degrees for 2 ¼ hours or until very tender.