If you are looking for cooking ham instructions, there are many, many answers for this question. Probably more than any other, this one single cut of meat is available in many different ways.

The ham comes from the hind leg of a hog. It can be purchased whole or half. If you are buying only a half, it is important which half you buy. The best half, called the butt half comes from the upper thigh and is rounded on the end. It contains more meat. The shank half comes from the lower portion of the leg and is pointed on the end. This half has more bone and less meat. Many grocery stores will put only the shank half out on sale. Many people who don’t know think they are getting a good price per pound when actually they are buying mostly bone. Also consider this when you buy a whole ham. It may be worth buying two of the butt halves, depending on price. 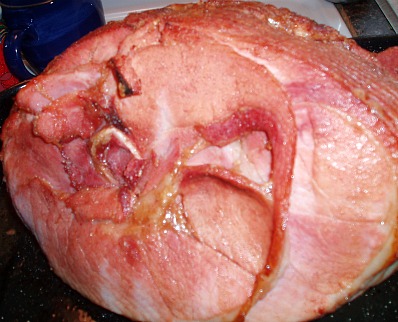 Hams are also available boneless. These are nice for slicing and could be just as reasonably priced, considering you have no bones. Boneless hams have no waste and are good for serving ham steaks. I personally like the bone in the ham. I like the flavor and I like using the bone for cooking other dishes like ham and beans. This is just a personal preference.

Cooking ham instructions on the label will tell you how much cooking is required before you serve it. Some are marked “cook before serving” which means it must be heated to an internal temperature of 160 degrees on a meat thermometer. If the label says “fully cooked” it means it can be served cold or you can heat it for better flavor. If the label does not state either one then assume it must be cooked.

Canned hams are available for purchase. These are always boneless and are fully cooked. Even though these hams are fully cooked, they are delicious heated with a honey or brown sugar coating and pineapples on them.

A special process is employed in curing the Virginia or Smithfield hams to produce a special flavor and texture. The surface of the ham is blackened and rusty looking along the edges. This must be scrubbed thoroughly and the edges trimmed off. Then the ham must be covered and soaked in cold water for 12 to 24 hours. After soaking place the ham in a large kettle, cover with boiling water, cover with a lid and simmer 25 to 30 minutes per pound.

Cured hams will store in the refrigerator for up to one week, whether cooked or uncooked. Refrigerate canned hams before and after cooking unless the label tells you that you do not need to.

Most national brand hams in the supermarkets today are of the mild cure smoke type. They are either uncooked or are ready to eat.

To roast fresh ham place fat side down on rack in shallow pan.

If any stuffing is left, spoon over top of roast; insert meat thermometer in thickest part of roast.

Roast uncovered for 3 ½ hours or until temperature reaches 165F degrees on thermometer.

HOW TO GLAZE A HAM using apple glaze recipe

Mix apple juice with equal amount of water and pour in pan around ham.