Some general cooking terms need to be learned when you learn to cook everything. When they appear in a recipe you will know immediately what they mean; poach, bake, broil or braise rather than frying. The list below is a thorough listing of terms; many you will only see occasionally in recipes but others will appear every time you cook. Knowing the difference between whip, mix, stir, and fold will certainly affect the result of your product.

Probably of the general cooking terms which have irritated me over the years is the difference between a pie, deep dish pie and cobbler. Many seem to think that a cobbler is a pie with a little more fruit, even in eating establishments. I know of one baker that takes leftover fruit pies, break them up and sell them as cobblers. These are not cobblers! When I get hungry for a cobbler, I want a cobbler! A pie is thinner, made with either a bottom crust or a bottom and top crust of pie pastry. A deep dish pie has thick fruit on the bottom and a top crust made of pie pastry. Cobblers are made with a biscuit dough. 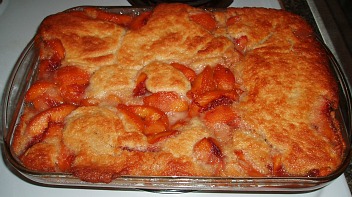 Butter 9 X 13 inch casserole baking dish (Best to have deep one to prevent fruit from running out. I placed a tray on the shelf below to catch drippings)

Blend in milk, stirring to moisten; spoon batter into buttered dish or pan.

Combine peaches, juice and remaining sugar (or other fruit) in pan; bring to a boil and pour over batter.


NOTE: If fruit is sweet, cut back on sugar; this amount of sugar is for unsweetened fruits.

When you pour hot fruit over batter, the batter will rise to the top

Bake for 50 to 60 minutes or until center is done. 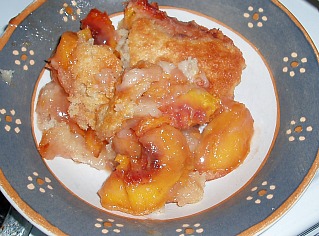 One of the general cooking terms if you can vegetables during harvest is to BLANCH vegetables. This is so important to know how to do because it removes the skins on vegetables like tomatoes very easily and quickly; but if not done correctly it will cook the vegetable too much.


Do you know how to CARAMELIZE? This is another of the general cooking terms you might want to remember. If this is not done correctly, it is a disaster. Turn your back and you will have a smoking burning sugar instead of sugar with a pretty caramel color.


Cooking term like to fold is very important in a recipe. If this is not done correctly as in an Angel Food Cake, the cake will not be light in texture as the cake should be. So you can understand how important it is to understand general cooking terms.