For me cooking with cilantro came about during the middle of my life. It was after I moved to Florida and ate in the local restaurants around Orlando. I could not figure out what that delicious taste was in some of the dishes especially the Spanish food. I knew it was not something which I had tasted before. You know, cilantro was never common in Ohio. In fact, I knew I never tasted it before I moved to Florida even though my family always cooked with a lot of herbs and spices. 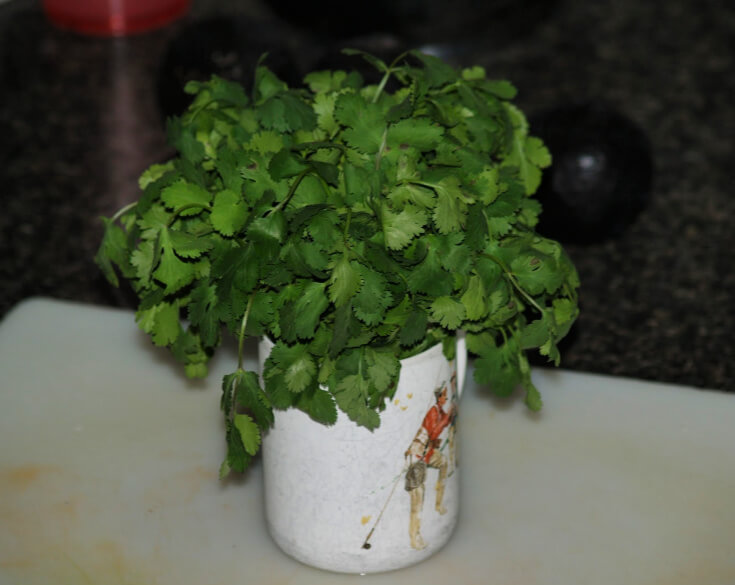 Although cooking with cilantro was uncommon in Ohio and most of the Midwest, it was very popular in the west and southwest United States. Like in those parts, cilantro is a necessary ingredient to the cuisines of India, China, South Asia, Central and South America. It was the delicious flavors of Mexican dishes which made me become addicted to this herb. The delicious flavor blends so well with ingredients like peppers, garlic, onion and tomatoes used in the recipes from these regions.

If you are cooking with cilantro, I am sure you will agree that the fresh is always best to use for flavor. It is difficult for me to always keep the fresh on hand because I do not shop often. In the warmer months I try to keep it and other herbs growing outside my door. They do not like hot weather so I try to shade them some to extend their growing season. If weather is not perfect, cilantro will deteriorate quickly.

If you are cooking with cilantro you probably already know that the dried cilantro seeds are called coriander seeds. The seeds are so far removed from the taste of cilantro that I often forget they are related in any way. I do like coriander but altogether different.) When I cannot cut cilantro fresh I purchase it when I shop at the market. Some say they have gotten cilantro with an extremely strong taste. My problem has been purchasing it with enough flavor. If I cannot smell the delicious fragrance, I do not buy it.

Since I began cooking with cilantro I have experimented with keeping it as fresh for as long as I can. I have found the best way to store it is by placing it in fresh water in a cup with the cut side down. I use to set the cup on my countertop but found I can extend the freshness by placing the cup in the refrigerator with a freezer bag placed over the top. When I see it deteriorating, I clip the ends and place it in the bag to store in the freezer. I like it almost as well as fresh and much better than dried which I also keep on hand for the times when I have nothing else. 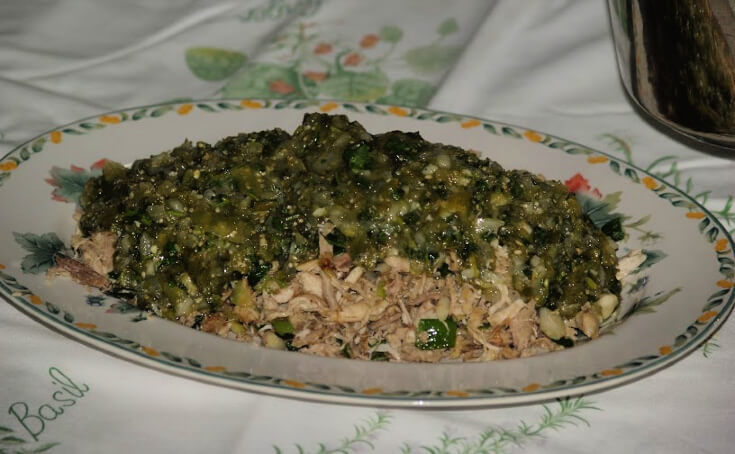 FIRST: Place tomatillos and quartered onion in a saucepan.

Simmer for 7 minutes until tomatillos become light and soft.

NOTE: Do not cook too long to burst open tomatillos.

Drain and reserve the liquid; place vegetables in food processor.

Add to processor the chopped onion and 6 GARLIC cloves.

SECOND: Heat 2 TEASPOONS of the oil in a large pan; add green onion.

Mince 3 GARLIC cloves and add to the pan; sauté briefly.

Add chicken to the pan and toss over medium heat for 2 minutes; set aside.

Cook about 3 minutes over medium heat.

FOURTH: Place the chicken in a large bowl.

Pour about 3 cups of the warm tomatillo sauce over the top.

Serve over tortillas; serve extra sauce on side. 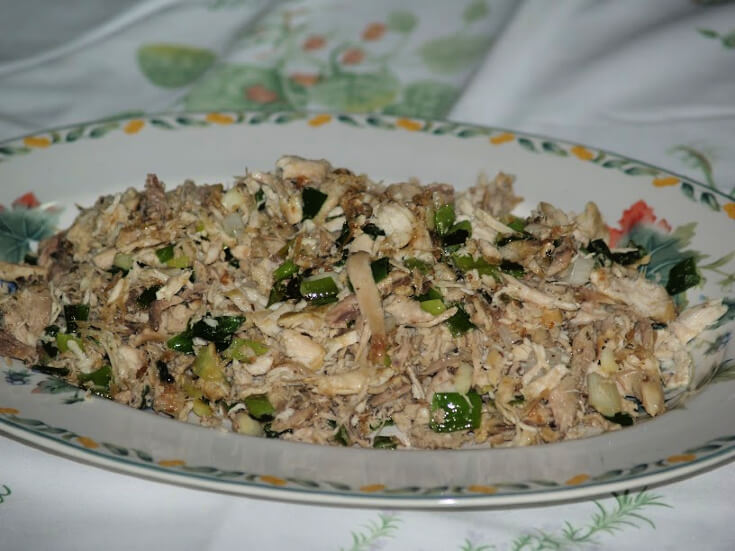 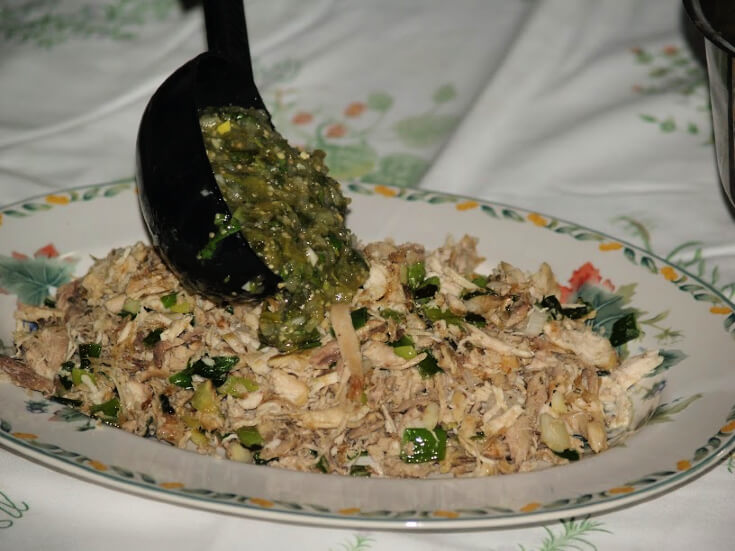 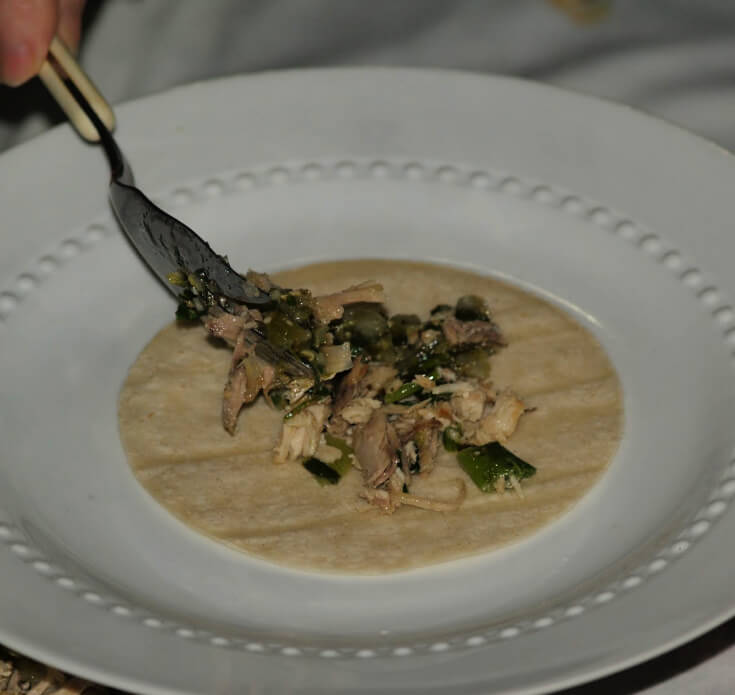 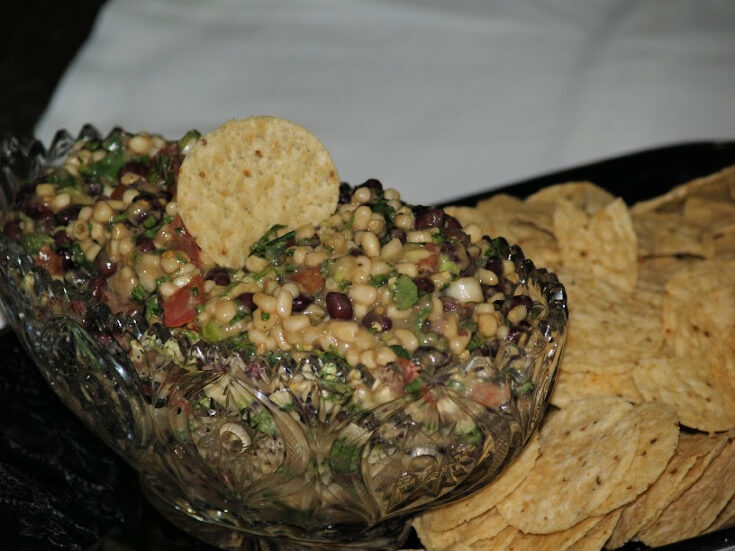 Try this delicious salad when cooking with cilantro.

Combine corn and next 7 ingredients in large bowl.

Season with salt and pepper; blend well, cover and chill.

TO SERVE stir in the chopped avocado; serve with tortilla chips.

When cooking with cilantro you will find many salsas which accompany great entre recipes like this one.

Stir in molasses and next 3 ingredients; bring to boil.

Prepare charcoal fire in smoker and let burn 15 to 20 minutes.

Place the hickory chunks on the coals.

Remove the pork and reserve the marinade.

Place the reserved marinade in the smoker pan; add water filling to the line.

Coat grilling rack with vegetable spray and place in smoker.

Place pork on rack and cover with smoker lid.

FOR MANGO SALA combine all the salsa ingredients in medium bowl.

Mix well and serve with the pork tenderloin within 1 hours of mixing.

When cooking with cilantro try this creamy dressing to serve with fish and other entrees.

Combine all ingredients in food processor; process until mixture is slightly chunky.

Cover and chill until ready to serve; makes about 1 ½ cups.

When cooking with cilantro, this flavorful vinaigrette is delicious on taco, salads, vegetables and special entrees.

Combine in food processor the cilantro, sugar, garlic and ½ CUP of vinegar,

Process until cilantro and garlic are chopped fine; blend in REMAINING vinegar.

Slowly pour in olive oil while processor is running; add salt and pepper.

Pour into a squeeze bottle and chill until ready to use.

When cooking with cilantro, try this cilantro black bean salsa to serve with sirloin steak.

FOR SALSA place 2 teaspoons of the seasoning mixture in a separate bowl.

Add to the 2 teaspoons the beans, tomato, onion, and chopped cilantro.

Rub the remaining seasoning mixture into the top of the steak.

Cook the steak over a hot grill or under hot broiler about 8 minutes on each side.

Cut steak in thin slices across the grain; place steak on the plates.

This Mexican salsa is a delicious recipe to serve with many entrée when cooking with cilantro.

Combine and stir together all ingredients.

If cooking with cilantro on a cold day, warm up with this hearty chili verde.

Combine HALF of the beef, pork, onion, bell pepper and garlic in 1 TABLESPOON oil in Dutch oven.

Place over medium heat and stir until browned; remove from Dutch oven and set aside.

Repeat with REMAINING HALF of the ingredients in 1 TABLESPOON of oil.

Combine the meat mixture with tomatoes and next 7 ingredients in Dutch oven.

Bring mixture to a boil; cover, REDUCE HEAT and simmer 1 hour until meat is tender.

When you are cooking with cilantro you could be cooking many tasty fish recipes.

FOR SALSA combine and mix all the salsa ingredients in a large bowl.

FOR FISH combine Parmesan cheese and next 4 ingredients in shallow dish.

In another shallow dish combine egg and milk; mix well.

Dip fish fillets in the egg mixture and then dredge in the flour mixture.

Place fillets in prepared pan; bake until about 15 minutes until fish flakes.

You can enjoy many flavorful recipes when cooking with cilantro.

Rub fajita seasoning on all sides of the chicken breasts strips.

Place chicken in dish; cover and refrigerate for 30 minutes.

Cook and stir constantly until done about 4 minutes.

Remove chicken from the skillet and keep warm.

Coat the skillet with cooking spray; add onion and next 3 ingredients.

Cook and stir until tender; stir in beans and cilantro until thoroughly heated.

Coat 1 side of each tortilla with cooking spray; place coated side down in skillet.

Layer with chicken, vegetable mixture and cheese; top with tortillas uncoated side down.

Cook over medium heat until lightly browned on both sides turning once.