How to Make Crockpot Mexican Recipes

Learn how to make Crockpot Mexican recipes. It is like setting a pot slowly cooking on the back of a wood burning stove as the flavor of the recipe intensifies without any fuss. For cooking in a Crockpot (slow cooker) you need a little knowledge of this cooking devise. Although this is a slow cooker, for safety of the food, the temperature of the food needs to rise to about 140F degrees very quickly. Then you can reduce the heat to low and cook the remaining time on low.

When I learned how to make Crockpot Mexican recipes, I found them to be very delicious. This slow cooking process allows all those wonderful seasonings in the Mexican cuisine to blend together. If you do not have a slow cooker and plan to purchase one, it is best to buy one that has a removable liner. It makes it so much easier to wash away all those thick sauces if it can be submerged in hot soapy water to clean.

As I was learning how to make Crockpot Mexican recipes, I found that most of the soups, stews and sauces normally cooked on the stove can be converted to slow cooking. This makes them easier to assemble and forget about them while you do other chores. Try this easy crock pot recipe or experiment with adapting your own favorite recipes for slow cooking.

With a potato masher or a pastry cutter, mash two cans of the beans to make a thick paste; set aside. In a heavy saucepan, melt the butter; add the onions and celery and sauté until tender.

Place the mixture of butter, onions and celery on the bottom layer of the crock pot.

Next layer the diced ham.

Stir the cumin, oregano, salt, pepper and hot sauce into the chicken broth; pour over the other ingredients in the crock pot.

Heat on high until mixture is hot;cover and cook on low 8 to 9 hours or on high 5 to 6 hours

Toward the end of cooking, add the mashed beans to thicken.

If desired serve with the cheese and chopped cilantro. 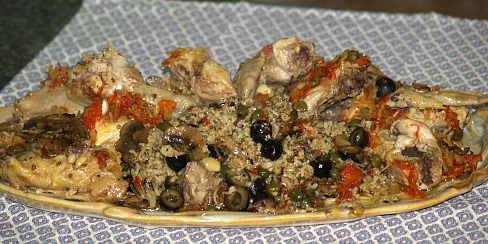 Chicken and rice recipes are among many of the Crockpot Mexican recipes.

Place rice in Crockpot then chicken breasts, then sliced mushrooms.
Combine remaining ingredients in a bowl and blend; pour over chicken, rice, mushrooms.
Cook on high for 3 hours or until chicken is tender and done.

Brown beef in skillet and place in Crockpot; add mushrooms, onion, celery, carrots and potatoes.
Combine in a bowl the tomato sauce, garlic, flour beef broth, oregano, marjoram, chili powder, cumin, red wine and water; blend well.
Pour sauce mixture over the beef and vegetables; cook on high about 2 hours and reduce to low about 6 hours or until done.
Season with salt and pepper.