How to Make a Crown Pork Roast Recipe

Learn how to make a crown pork roast recipe (or any crown roast).  It is one of the most magnificent of all entree presentations. Not to mention the taste, but for special occasions and special dinners you cannot go wrong with the appearance of this recipe on your dinner table.

Although the crown roast can be made with pork, lamb or veal, it usually never shows up at dinners. I have never been to a dinner and been served a crown roast recipe; I feel that most cooks are afraid that it is too difficult to prepare but they really are not hard. 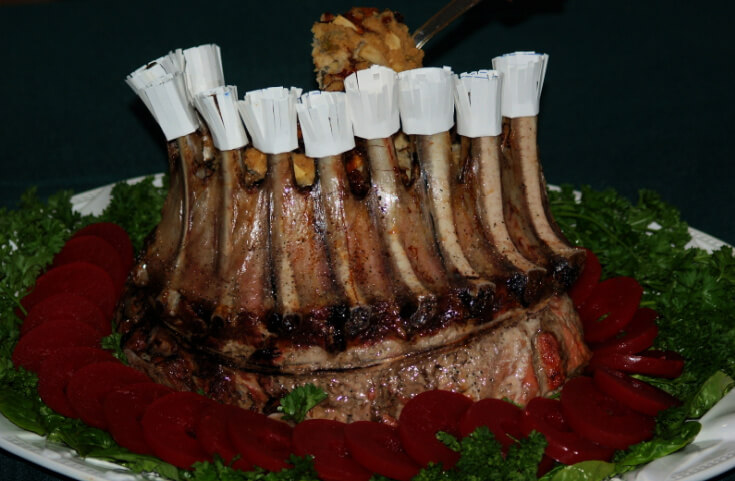 How to Make a Crown Pork Roast Recipe

When I learned how to make a crown pork roast recipe, I realized that it is called "crown" because that is what it looks like. All the crown roasts are made from the rib part of the animals; they are bent into a circle and tied forming a crown. The meatiest part is on the bottom and the rib bones are positioned in an upward direction.

Prior to roasting the tops of the bones are covered with foil to keep them from burning. Before serving the center of the crown is usually filled with savory stuffing recipe, potatoes or vegetables. Often the top of the bones are capped with some type of small ornaments or decorations like little paper hats, kumquats or other little attention getters. 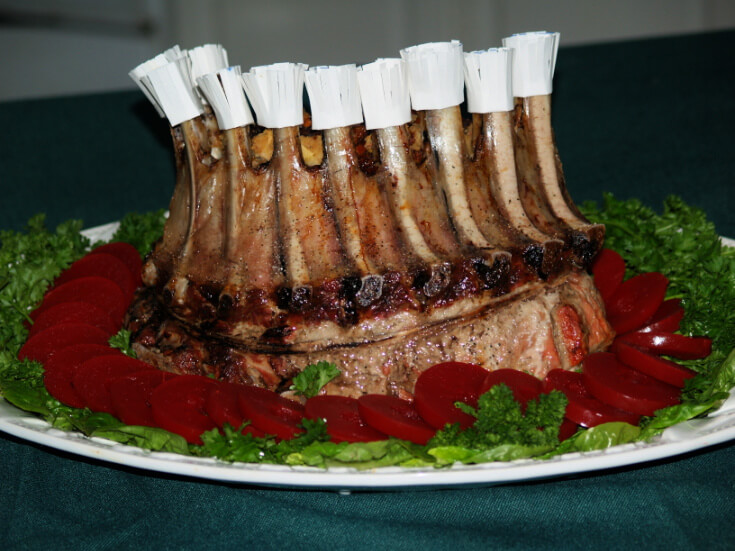 To ensure you have a beautiful presentation when you make your crown pork roast recipe start with your butcher.

Have your meat market prepare the crown pork roast with 10 to 15 chops.

For easy carving have the backbone removed.

To prepare shape meat in a circle in a shallow roasting pan with bone ends up.

Tie meat with kitchen string to hold shape in place.

Season the roast with salt and pepper.

Wrap ends of bones with foil to prevent burning; place on rack in oven.

NOTE: Do not add water; do not cover.

Prepare your favorite bread dressing for 12 servings (Or use packaged dressing).

NOTE: I used the apple stuffing recipe with pistachio nuts and baked 40 to 50 minutes.

One hour before roast is done, stuff the center with the dressing.

HOW TO MAKE A CROWN PORK ROAST RECIPE WITH RICE STUFFING

(Pork can be ordered from meat department; allow ¾ pound pork per person)

Place a large tin foil ball in the center of the roast to help hold the shape of the roast.

Sprinkle over roast to season.

Place a small piece of tin foil as a cap over the tip of each of the bones.

Allow the roast to set for twenty minutes before cooking to absorb seasoning...

Roast for 1 hour and 15 minutes; remove foil ball in center and spoon rice stuffing in the center.

Return to oven and continue roasting for remaining 30 minutes or until internal temperature reaches 140 to 145F degrees using a meat thermometer.

After cooking remove the roast from the oven and allow it to rest at least 10 minutes before slicing.

To serve remove foil caps from bones; cut edge and center from kumquats and place on the bones where the foil caps were placed. 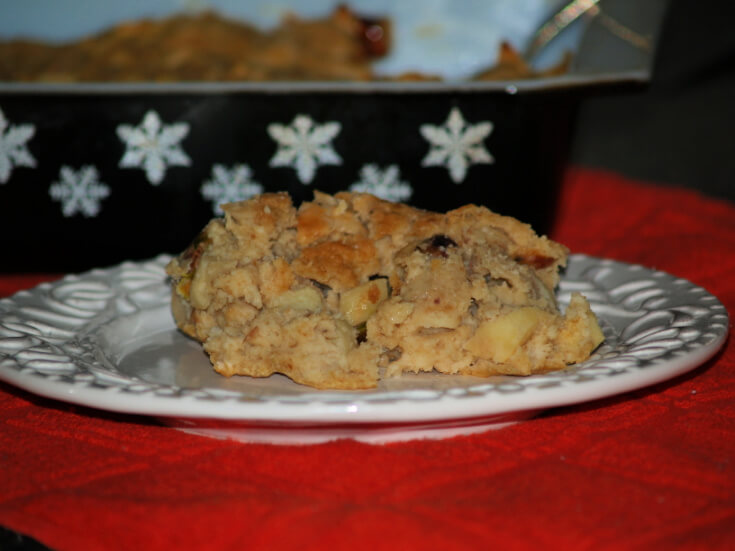 This is the perfect stuffing to make with a crown pork roast recipe.

Beat together milk mixture and eggs; stir into bread mixture.

Return to oven and bake until stuffing is done.

Rub roast with salt and pepper; place on rack in shallow roasting pan.

Roast about 1 hour and 45 minutes or until internal temperature reaches 150F degrees.

NOTE: To check temperature insert thermometer in thickest part of meat not touching any bone.

TO PREPARE STUFFING sauté leek and celery in melted butter for 5 minutes.

Stir in apple and cook 5 minutes longer; remove from heat.

Break crispbreads into ½ inch pieces (About 2 cups); place in a large bowl.

Sprinkle wine over the top; toss well to blend.

Remove the roast from the oven; mound stuffing high in the center of roast.

Prepare pan sauce; to serve carve between ribs and serve with sauce.

Strain into a saucepan and skim off fat; bring to a boil.

Add salt and pepper to sauce for taste; makes 1 ½ cups.

Place in oven and roast for 2 ½ hours.

TO PREPARE STUFFING sauté celery and onion in skillet of melted butter until tender.

Cook and stir cranberry sauce and bouillon in a small saucepan until bouillon dissolves.

Pile stuffing in center of rib roast; place roast in oven for 45 to 60 minutes.

NOTE: Internal temperature of thickest part of roast away from bone should reach 160F to 170F degrees.

TO PREPARE ROAST wipe the meat with damp paper towels.

Insert meat thermometer in fleshy part of meat away from fat and bone.

Remove roast from the oven; mound the stuffing in the center cavity.

Cover stuffing with a square of foil; return the roast to the oven.

Roast for 1 hour and 25 minutes or until meat thermometer reaches 185F degrees.

Place the roast on a heated platter; keep warm while making gravy.

Cook and stir mixture over medium heat until mixture boils and thickens.

Serve gravy with the roast and stuffing; serves 8.

Make a crown pork roast recipe for a crowd serving 12.

Season the meat with salt and pepper.

Wrap the bone ends in foil to prevent over browning.

To hold shape, place a small ovenproof bowl or cup in center.

Insert meat thermometer into thickest part of meat away from fat and bone.

Roast for 30 to 35 minutes per pound or until thermometer reaches 170F degrees.

FOR STUFFING 1 hour before roast is done remove bowl from the center.

Fill the center with your favorite bread stuffing recipe (8 Cups filling the crown).

Cover only the stuffing with a piece of foil; return to oven for another hour.

NOTE: Remove foil for the last 30 minutes of baking to brown stuffing.

Season roast with salt and pepper.

Place roast bone side up in shallow roasting pan.

Add the apples; cook and stir for 1 minute.

Spoon mixture into the center of the roast.

Cover stuffing and ends of the bones with foil.

Heat preserves and ¼ CUP of the brandy; set aside ¼ cup.

NOTE: Use the ¼ CUP reserved preserve mixture to baste meat every 10 minutes during the last hour of cooking.

TO MAKE STUFFING sauté celery and onions in butter until tender.

FOR ROAST season meat with salt and pepper; fill center with apple stuffing.

Cover stuffing lightly with a piece of foil; cover bones tightly with foil.

Insert meat thermometer in thickest part of meat away from bones.

Bake for 30 minutes per pound or until thermometer reaches 160F degrees.

Remove the foil; brush meat and stuffing with preserves.

Garnish meat and serve; serves about 10.

Fold a piece of foil into an 8 inch square; place on a rack in roasting pan.

Season roast with salt and pepper; place roast bone side up on foil.

FOR STUFFING combine rice, raisins and chicken broth in a saucepan.

Bring rice mixture to a boil; cover, REDUCE HEAT and simmer 20 to 25 minutes.

NOTE: Rice should be tender and the liquid should be absorbed.

Wrap foil tightly around the rib bones; spoon rice mixture in the center.

Insert meat thermometer into deepest part of meat away from fat and bones.