Recipes for Easter in Hungary

I have chosen Easter in Hungary this week because it brings back many fond memories of my childhood. I often mention my many siblings; you will probably remember my mentioning of one of my older sisters, Gloria. I was very young when she married; her husband’s family came to the United States from Hungary probably in the 1940’s (I am guessing). Much of Gloria’s cooking was inspired by her mother-in-law, Rose. Rose’s family was very strongly embedded in the traditions of Hungary. She lived two blocks from my sister. Whenever I was not in school I would go to stay with Gloria and we would always walk down to Rose’s house.

Through Rose I learned a lot about Easter in Hungary as well as the food and events surrounding other holidays. I loved going to her house because she was always in the kitchen cooking interesting dishes. All holidays were celebrated with traditional customs and traditions; this was especially true of Easter in Hungary with many traditional recipes. The week prior to this special holiday was in much “hustle and bustle” in the kitchen; often with other women of the family joining in to help with the cooking. The aroma of Rose's kitchen smelled of fresh baked breads, nut rolls and other sweet pastries. The entrees had the fragrance of green peppers, baking ham, beef, chicken and lamb. The hot spicy fragrance of homemade horseradish blended to make a wonderful welcoming at the front porch. All the food for Easter in Hungary had to be finished before Good Friday and it had to be enough to last through Easter Monday. This food had to feed most of the members of the church so an abundance was required. This cooking was done during the season of Lent (the great fast) so tasting was limited.

As in most countries, one of the first projects for the Easter holidays was boiling and coloring the eggs. This was a time consuming and major project for most Hungarians but a very important part of the traditions. Of course there had to be some solid colors, especially many red eggs symbolizing the blood of Christ. The traditional egg painting for Easter in Hungary was still being done by Rose’s family with patterns ranging from very simple elegant to intricate complicated designs. This is why this project was the first to be done before they got too tired to spend the time coloring the eggs. The paint was made naturally from fresh vegetables and the eggs were beautiful. 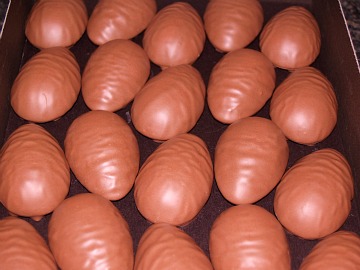 Add vanilla and stir until mixture is creamy mass (should be so stiff that it can barely be stirred).

Mold with hands into large Easter egg; roll in melted coating and set to let harden.

Rose’s culture had games and superstitions surrounding Easter and the egg. Easter in Hungary as with many cultures, likened the egg to fertility and new birth. Rose explained, that they would play special games on Easter Monday, the day after Easter in Hungary. Easter eggs were a sign of love and luck, so on this Monday the males would sprinkle their favorite (or chosen) girls with perfumed water. They would then ask for a kiss and red egg (or some preferred to ask for chocolate eggs). If the girl was interested she would respond with their request. The egg was important for children’s games also; they would wake up to find decorated eggs hidden around their beds with other little gifts.

I have gotten a little ahead of myself talking about Easter in Hungary so I will back up to finishing the food. Like I said, I was told almost everything had to be cooked by Good Friday because after the festivities began there is no time for cooking. Friday evening there was always a church service for Easter in Hungary. Every family took a basket of food with them for the Priest to bless. (This is done in several countries.) Rose’s family and the entire church gathered in the banquet hall after the Good Friday service to celebrate the end of the fasting with a huge feast. Included in this feast were all the items in the baskets of food which received the blessings and a lot of the food which all the families had been cooking the prior week.

The next day, on Holy Saturday everyone returned to the church again. After the Holy Saturday service the people had a parade in which they carried a statue of Christ. Following this event Rose’s family (everyone including extended family) gathered together to celebrate the holiday season with another great meal. There was such a variety of food cooked for all these occasions; the recipes could be anything from ordinary favorites to special recipes. 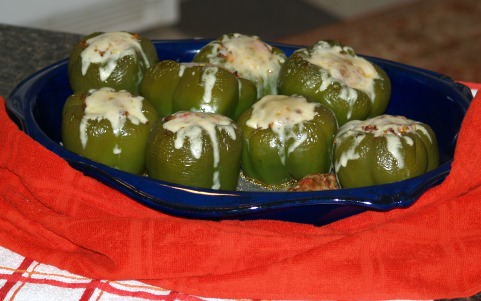 Clean peppers and cut off tops; remove seeds and veins and place in baking dish.

Stuff peppers with mixture; pour water in bottom of dish.

Bake at 350F degrees about 1 hour or until peppers are tender and meat is done.

Sprinkle with cheese; return to oven until cheese melts. 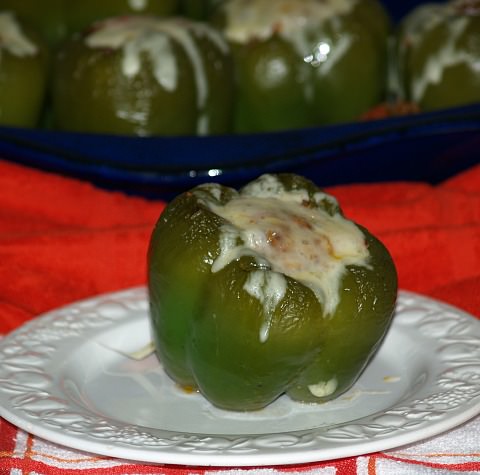 Sunday of course is Easter; this started with a traditional Easter sunrise breakfast. As in most events of Easter in Hungary the fresh yeast breads, sweet pastries, nut and poppy seed rolls were the focal point of this sunrise breakfast. Following the church service, the family gathered together for another day of feasting and socializing. This meal was the “highlight” of Easter, usually having ham or lamb with plenty of side dishes including many pastries, fresh breads and desserts. Rose once explained to me about the tradition of what they called flower Sunday. Now this was important to me because this sounds like my family; it could also be a German tradition (I don’t know). Many people brought spring flowers as gifts to the home that was doing the entertaining.

I say this sounds familiar because on Easter and Mother’s Day every person who came to our house brought my mother a potted flower. We had a large sun porch and Mom would place the flowers out there. When you walked into the house you could smell all those wonderful flowers (along with the food). What a fragrance! When the weather warmed up Mom would plant them outside and they would bloom for a long time; many would come up every year. Although I loved our traditional holidays I find those of other people, especially from other countries very interesting.

Some ingredients are very popular in the Hungarian cuisine such as sour cream, paprika, green peppers and horseradish. You will see these in the following recipes.

This horseradish sauce recipe is great to serve with chicken, pork or any kind of meat.

Slowly blend in broth and cream while stirring.

Mix together sugar, vinegar, horseradish and salt to taste; blend into creamed mixture.

Cook mixture until thickened and spoon over meat.

Add onions and water to lamb in pot; cover and simmer until lamb is tender about 1 hour. (Add more water if needed)

Gradually stir in sour cream; heat but do NOT boil.

Serve lamb and sauce over noodles. 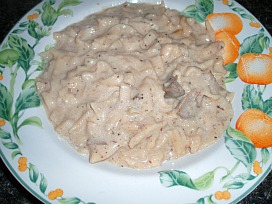 You will find many recipes for Easter in Hungary as well as any time of the year including one of my favorite ingredients; sour cream. For me it is a great addition to many recipes; but added calories.

Bring to boil, cover and simmer until meat is fork tender about 2 hours.

Cook noodles according to package and toss with butter.

NOTE: Sometimes I stir sour cream into goulash before serving over noodles; it is delicious.

Melt half of shortening in Dutch oven; brown steaks quickly on both sides.

Remove from pot and set aside; add remaining shortening and onions.

Stir and fry onions until golden about 10 minutes; remove from heat.

Cover and place in oven at 325F degrees and cook about 1 ½ hours; remove pot from oven.

Stir in remaining broth, peppers, tomatoes and potatoes; cover and cook on stove top until potatoes are tender.

Check seasonings and adjust before serving.

Easter in Hungary means many sweet pastries like kolacs. If you have never made these pastries before, you will find most of them very buttery and very delicious.

Let rise in warm place for 1 to 2 hours.

Cut dough in 8 pieces; roll out each piece to ½ inch thick.

Combine and mix nuts, sugar and egg white for filling.

Spread dough with apricot jam and then filling mixture.