I always wanted to learn how to make easy fried chicken recipe that tasted really good. I am going to share how I do this with you. My family came to the farm yesterday for dinner. I wanted a family dinner menu but also childrens recipes. Although the children are very easy to please when it comes to food, I thought they would especially like fried chicken.

My children always loved homemade noodles so I decided to add those to the menu. (You could use dry or frozen noodles from the grocery store to make even easier.) Little Isaac, the two year old loves green beans and for that reason green beans was the choice vegetable of the day along with a vegetable salad.

Back to how I learned how to make easy fried chicken recipe. As I have shared with you before, when I have company for dinner, I like to prepare as much as possible the day before. Since I needed chicken broth for the noodles, I decided to boil the chicken pieces the day before. As the pieces cooked to the stage of barely done (no blood) I removed them to a colander to drain. The smallest pieces were first to finish cooking.

After all the chicken was cooked, I set the broth aside to cool. I then seasoned flour with salt, pepper, sage, and a little garlic powder. I dipped each piece of the cooked chicken in the seasoned flour and placed it in single layers on clean trays. After covering, I placed the trays in the refrigerator for overnight. When I finished prepping the chicken, I refrigerated the broth. 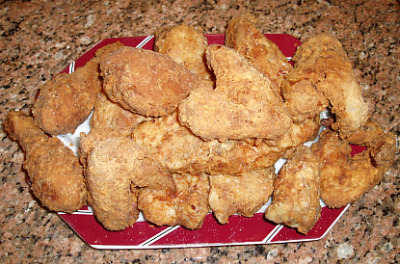 Yesterday morning, about ninety minutes before dinner, I heated up the grease to deep fry the chicken. I used lard because I had excess, but you can use cooking oil. After removing the trays of chicken from the refrigerator, I dipped the pieces in a buttermilk and egg mixture, then rolled the pieces again in the seasoned flour mixture (I added cornstarch to the flour mixture to make the crust nice and crispy.) I then carefully dropped only enough chicken pieces into the hot grease so as not to crowd them up. When the crust was a nice deep colored brown, I removed the pieces to a platter to drain on paper towels. 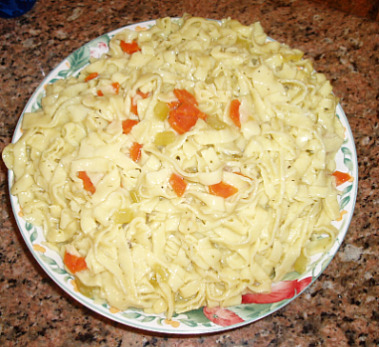 Another note worth mentioning is about the chicken broth. Because it was refrigerated overnight, I placed paper towels over the top while still cold. When I lifted the paper towels off, the fat was removed with the towels. Only a nice chicken broth remained in the bowl. When I heated the broth to add the home made noodles, there was no fat in them.

I chose not to make a dessert for the family dinner menu but decided to serve the children ice cream cones later in the afternoon; adults received bowls of ice cream. 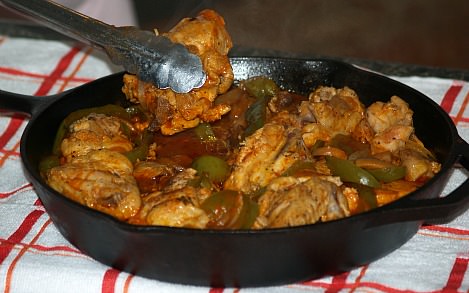 This is an easy fried chicken recipe with lots of flavor; it is a deep fry recipe.  I have never found the ginger syrup for sale locally but it is also easy to make and very good.

Combine and mix in bowl the soy sauce, sugar and ginger syrup.
Brush this mixture on all surfaces of the chicken and let stand for 1 hour.
In another bowl combine flour, cornstarch, egg and Sprite; beat until smooth thin batter.
Coat chicken pieces thoroughly with the batter and fry in deep oil until tender and golden.

GINGER SYRUP RECIPE for recipe above

Combine and blend in medium saucepan; bring to a boil.
Reduce heat and simmer until syrupy and sugar is dissolved.
NOTE: This adds a lot of flavor to many chicken recipes as well as other dishes.