How to Make Eggplant Recipes

I did not learn how to make eggplant recipes when I was young. Like when I first learned how to cook parsnips and a few of the other vegetables that I didn’t grow up with, I had to experiment. Dad did not grow eggplant in our garden so I learned later in my life how to cook eggplant. Mostly we ate what we grew; we had plenty of bean recipes. When I learned how to make my first eggplant recipes, they were different eggplant Parmesan recipes.

I didn’t like the flavor of the eggplant; it had a bitter taste. This was unusual for me not to like any vegetable. The nutritional value of most vegetables including this one are so good to add to your daily diet. I learned when I was very young that soaking foods in salt water neutralized a strong flavor so I decided to learn how to make my eggplant recipes like this.

I bought more eggplant, soaked overnight in cold salt water. The next day I prepared the eggplant Parmesan recipe again. It was delicious and I was addicted! Through the years many people have told me that they don’t like this vegetable either; I have shared how to cook eggplant with many. It has worked every time.

Even though we never grew eggplant when I was young and I don’t remember anyone who did. Today it has become very popular in our cuisine and even my brothers grow them; like the beautiful ones in my picture. I believe one reason for this is due to the influx of many Italian immigrants bringing to us their delicious recipes. I think of most of my eggplant recipes as being from the Italian cuisine. 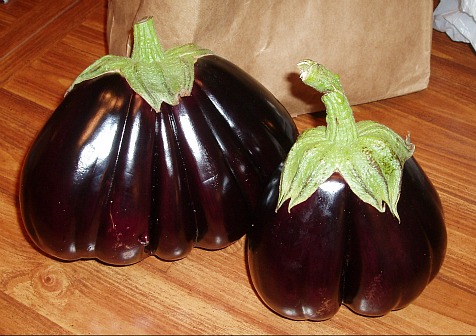 How to Make Eggplant Plant

Eggplant recipes are now very plentiful here in the United States for everything from simple fried eggplant to casseroles to appetizers and many more. They are so good and my favorites when teamed up with fresh garlic, various cheeses and spicy tomato sauces.

HOW TO MAKE FRIED EGGPLANT RECIPE 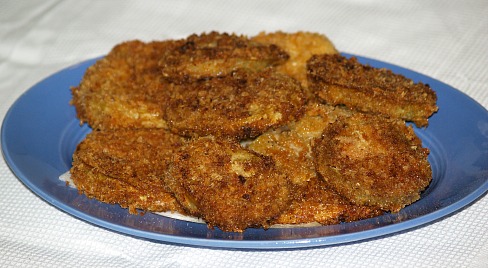 Season the matzo meal with salt, pepper and paprika.

Dip each slice into egg and then the matzo mixture. 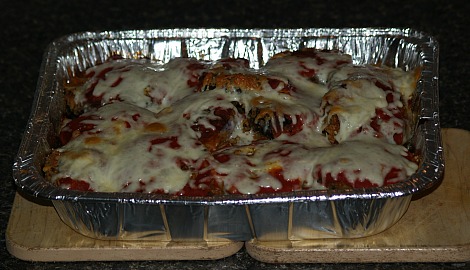 The most famous of the eggplant recipes has to be eggplant parmesan.

Dip into the beaten egg and then the bread crumbs.


Brown on both sides in hot olive oil.

Make one layer eggplant in a casserole dish.

Repeat layers until all ingredients are used up.


Top the last layer with sauce and Mozzarella cheese. 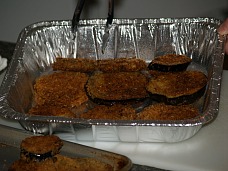 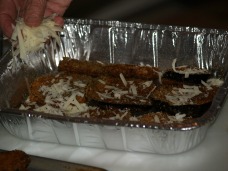 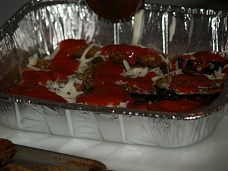 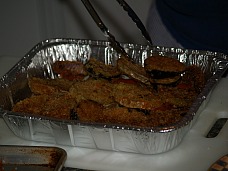 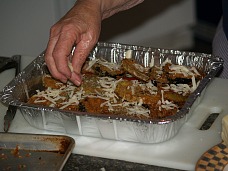 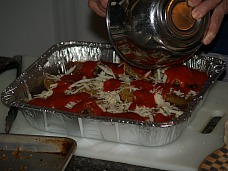 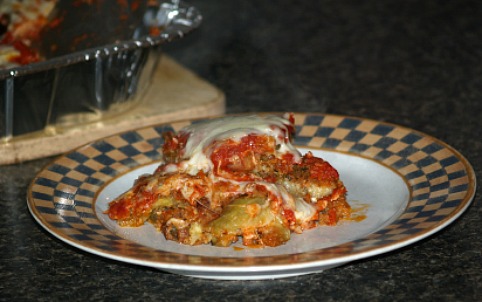 How to Make Eggplant Parmesan Recipe 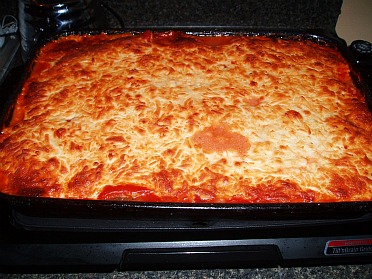 Like many vegetables like grilled corn eggplant is also very delicious; you can eat it right off the grill.

Mix all ingredients except for the eggplant slices and the cheese.

Dip eggplant slices in the oil mixture, coating both sides.

Cover and grill eggplant slices on both sides over medium coals, turn once and brush with oil.

Cook about 8 to 10 minutes until eggplant is tender.

Top with cheese the last 2 minutes.

NOTE: GRILLED EGGPLANT PARMESAN I make a delicious eggplant Parmesan using eggplant slices from the grill or on my kitchen griddle. Simply layer the grilled eggplant with sliced ripe tomatoes in a greased pan. Spread each layer with grated Parmesan Cheese. Top with grated Mozzarella cheese. Cover with grill top or place in the oven on about 375 F degrees for about 15 minutes until hot and cheese melts. 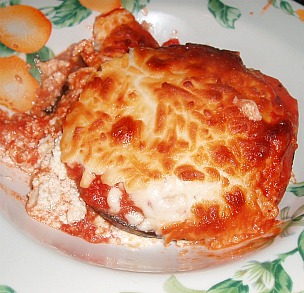 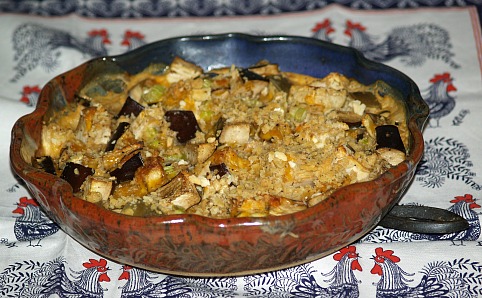 How to Make Eggplant Casserole Recipe

You will find many cheeses added to eggplant recipes; it is a great combination. 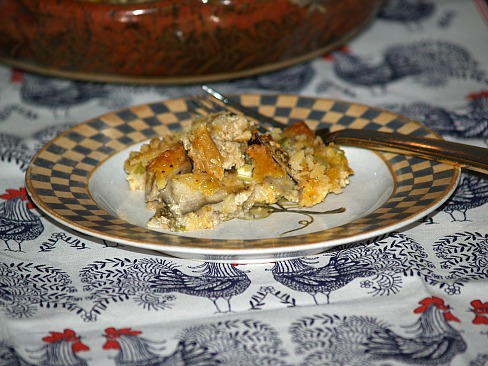 How to Make Eggplant Casserole Recipe 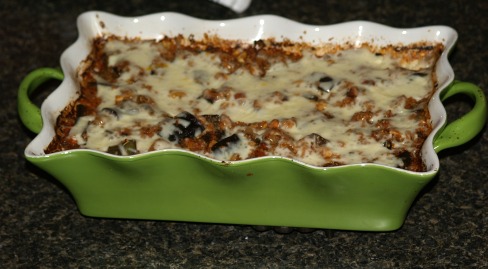 NOTE: This recipe can be made with bulgur or quinoa.

Preheat oven to 350F degrees.
Cook eggplant in boiling water for 3 minutes; drain and set aside.
Cook onion and garlic in olive oil in large skillet until onion is tender.
Add eggplant, bulgur and remaining ingredients to the skillet.
Bring to a boil, reduce heat and simmer uncovered 3 minutes.
Spoon eggplant mixture into lightly greased casserole dish; bake for 30 minutes if using bulgur and bake for 65 minutes if using quinoa.

Top with Mozzarella Cheese the last 5 minutes of cooking time. 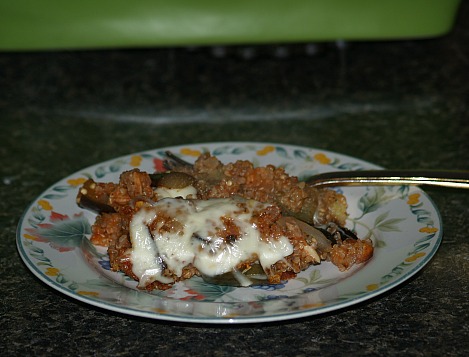 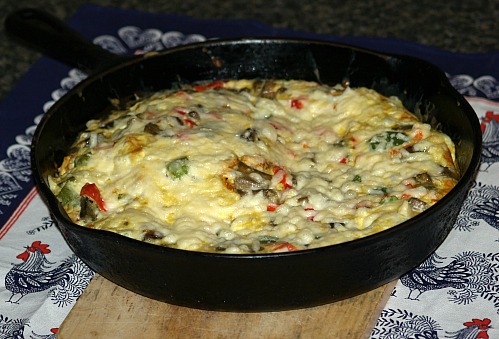 Cook first 3 ingredients in oil in ovenproof skillet (I use iron skillet) over medium high heat 3 minutes.
Combine eggs and next 3 ingredients in a large bowl and blend well; add to skillet.
As mixture starts to cook lift edges up with spatula so uncooked portion flows underneath.
Cover and cook over low heat 10 to 12 minutes to allow top to set.
Uncover and sprinkle with cheese; set under broiler 2 minutes or until golden in color.
Cut in wedges and serve immediately. 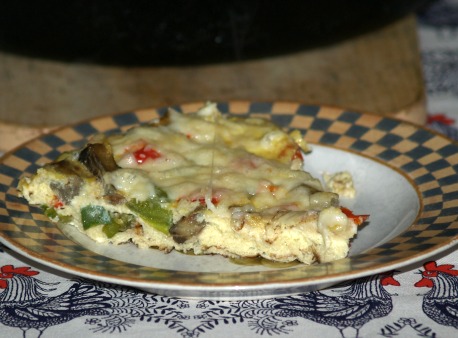