How to Make French Onion Soup

I learned how to make French onion soup because it is one of my favorites. It is light enough to serve with a dinner or it goes well with just a salad or sandwich. A hot bowl right out from under the broiler with the cheese melting is delicious on a cold day.

It is no wonder that onion soup became so popular. Onions have been around for centuries. Although they were once thought to be a poor man’s food, it didn’t take long to realize the flavor was worth eating by everyone. This is one thing that I never allow myself to run out of. I even keep dried onions and powder as backups.

Because of the wonderful flavor onions add to every dish, I use more onions than any other item. When I was young, I remember hearing of people who packed plain onion sandwiches for their lunch or maybe peanut butter and onion sandwiches. I sure add onions to many sandwiches! Do you remember how popular the liver and onion dinner used to be? Yes, I see why I learned how to make French onion soup and it became a hit.

After I learned how to make French onion soup I read that the original version which came from France during the eighteenth century is made with a blend of beef and chicken broths. The rich “oniony” flavor of the soup comes from caramelizing the onions until golden brown before adding them to the soup. Traditionally a large dried crouton is placed on top of a crock of soup; on top of the crouton is placed a slice of cheese. It is then placed in the oven, under a broiler until the cheese melts. 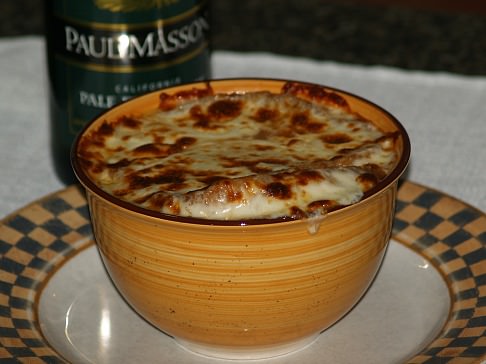 This is my favorite and very simple to make; I love the sherry flavor and mozzarella cheese.

From slices of bread cut to fit bottoms of your bowls; then toast.

Lightly brown the onion slices in the melted butter. Add the beef broth and simmer until the onions are tender. Blend in the sherry and remove from heat. Place the toast in the bottom of the bowls and ladle the soup over the toast. Cover the top of the soup with sliced mozzarella cheese. Place under a broiler for a couple of minutes until the cheese melts. 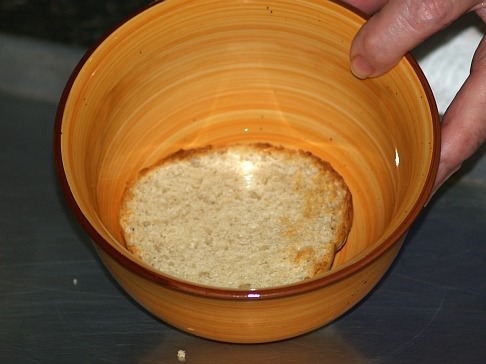 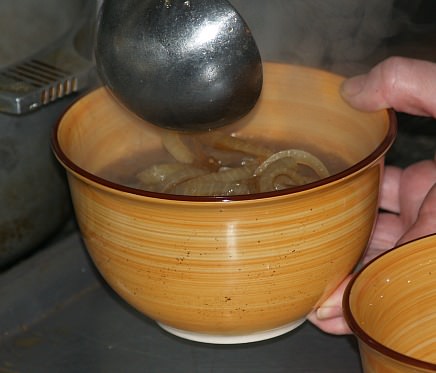 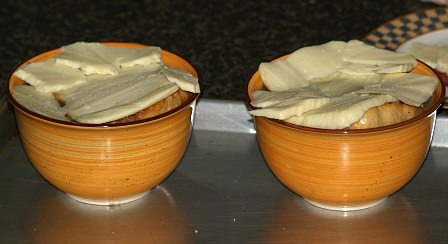 This recipe is also very good but has a little more flavor with the thyme and bay leaf; Gruyere cheese is also delicious.

Cut onions in half lengthwise; cut crosswise into thin slices.

Cover and cook onions in oil and butter in a large Dutch oven over medium low heat for about 20 minutes stirring often.

Stir in the garlic and cook uncovered for 30 minutes, stirring often.

Add 1 cup broth and bring to a boil; boil 1 minute.


Bring to a boil, reduce heat and simmer uncovered 20 minutes.


Ladle 1 cup soup into individual bowls and top with a cheese crouton.


Preheat oven to 375F degrees.
Place bread slices on a baking sheet; bake for 15 minutes or until golden brown.
Rub each slice of bread with garlic.
Place Gruyere cheese on top of bread and sprinkle with Parmesan cheese.
Bake for 3 minutes or until cheese melts.

This is a very good onion flavored soup for those who like a little more hardy soup or thicker soup.

Melt butter in heavy saucepan; sauté onions on low heat until very tender but do not brown.

This recipe is still a little different, blending the sherry with bay leaf seasoning and changing the cheeses to Parmesan and Provolone. Remove bay leaf before serving.

Add the sherry wine and simmer for a few minutes; add beef consommé and chicken broth.

Bring to a boil; reduce heat and simmer for about 20 minutes.

Place 1 large crouton in each of bowls; add ½ teaspoon Parmesan cheese to each bowl.

Ladle hot soup in each bowl; top each bowl with a slice of Provolone cheese.

Place bowls on a tray and place under broiler long enough for cheese to melt and bubble.

Combine all ingredients EXCEPT cheeses in a slow cooker and simmer for 6 to 8 hours.

Place in soup bowls and top with bread and cheeses; broil to melt cheese.