I never thought about how to make a honey baked ham recipe when I was young; it actually sounded awful to have a sweet ham. I was still a teenager when I tasted my first honey ham; that was the real Honey Baked Ham. Someone in the family purchased one and brought it to our holiday dinner. We also had some of the famous onion buns from our famous local Woody’s supermarket. What a pair! Topped with Dad’s homemade horseradish, this made the best sandwich you could ever imagine eating. Needless to say this combination quickly became one of our family food traditions. 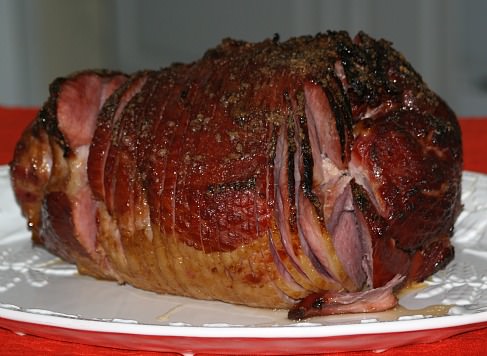 Later on in my life, when I moved to Florida with my children I started to think more about making a honey baked ham recipe. Instead I set out to find one to buy for Christmas dinner. Florida was not like it is today; not nearly as many people, stores or any businesses for that matter. After a lengthy search to where I could buy one of these hams I found one but it was a good drive from my house. I debated, “Was it worth the drive?” Yes; I had to bring a little feeling of home in Ohio to my new home in Florida. If you are familiar to Central Florida, the store was a little east of Altamonte Springs.

I pulled out with my kids in tote to find this store where I could buy my traditional ham instead of learning how to make a honey baked ham recipe. It was three days before Christmas so I was anxious to get there, buy my ham and get back. I knew I was getting close to the area so I started watching the cross streets carefully. Suddenly my attention was pulled from the street signs to hundreds of people lining down the street. “What is going on”, I said out loud. I couldn’t believe all these people! My oldest son said they are all going in that store to get a ham. Oh, no! That just could not be so!

Like I said, I was in a big hurry! I couldn’t believe that there were all those people after a ham but I was not about to return home without one after driving so far. I parked the car; the kids and I got out, crossed the street and got in the end of the line. After about 90 minutes, I was allowed in the store. (Only a few could go in at a time); it was really a little place, especially the sales room.

By now I must tell you I was getting pretty irritable after waiting all this time. As I approached the door, I could smell that wonderful Honey Baked Ham recipe; somehow it soothed my irritability. Then I saw all the other good food; potato salad, macaroni salad, baked beans and I can’t remember what all there was. To my surprise these were being handed out as free samples. Gosh, I didn’t realize how hungry I had gotten since I left home. This was all so delicious! And I realized my grouchiness totally disappeared! It must have been that comfort food! Anyway this became a memorable experience and a renewed tradition. I even figured out a recipe for those delicious Woody’s onion buns.

Even though I make my own honey baked ham recipe now, sometimes I still have to have my traditional fix with the “real thing”.A honey baked ham recipe can be as simple as drizzling honey from the bottle over the ham during baking. In the last hour of baking a ham, drizzle the honey over the ham every 20 minutes. (try sprinkling a little cloves over the honey) You can also make a mixture of honey with other ingredients to coat the ham while baking. Try the following.

HOW TO MAKE A HONEY BAKED HAM RECIPE with HONEY BUTTER

Heat ingredients in a small saucepan until the sugar dissolves. Spoon over the ham several times the last hour of baking.

Cook over low covered for 2 hours; turn off heat and allow to cool enough to transfer ham to large baking pan.

Measure 3 to 4 cups of liquid; pour into bottom of pan and bake ham at 325F degrees for 2 hours.

Cook until golden brown; garnish with pineapple and cherries and bake another 30 minutes (hold on with toothpicks).

Cover with foil if edges begin to get too brown.