How to Clean Fish

The markets, knowing how to clean fish, will prepare the fish having them scaled, cleaned and ready for use. It will be skinned, fin bones removed and large bones removed if requested. In that case, the whole fish only needs to be washed before cooking. The following will help with preparing fresh fish for cooking.

How to Clean Fish

When you know how to clean fish scaling fish is an important step. It requires holding the fish by the tail and with a short heavy knife scrape against the scales. Do this process outside if possible because the scales will fly causing a mess. If you do this inside, run under running water while scaling. Insert a sharp pointed knife along each side at the base of the fins to free the fin bones; then pull out fins with the small fin bones attached.

Knowing how to clean fish, it depends if the fish is going to be cooked whole. If so make a small opening under the gills just large enough so that entrails may be removed. If it to be cut up it may be split along the bottom from head to tail. Head and tail may be removed or not. Wash the scaled and cleaned fish with cold water and wipe dry.

Skinning fish is not usually desired because the skin helps to retain flavor and juices and is often necessary to keep the fish from falling apart during cooking. However filets such as cod and flounder are usually skinned. Have the fish scaled and cleaned, but do not remove head and tail. Cut out the fins. Slit the skin down the back and underside from head to tail. Cut through the skin all around the head. Using a pair of pliers, grasp the skin near the head and pull off from head to tail on each side, working carefully to avoid tearing the flesh. With a flat fish it might be easier to work from tail to head. Steaks and other cuts of fish may be skinned by loosening at one end and carefully stripping from the flesh. Cut off head and tail after skinning.

Learning how to clean fish, the boning fish part is done by splitting it on the underside all the way from head to tail so that it will lie flat. With a sharp knife, cut close to the bone all along each side and remove the backbone. Pick out small bones with tweezers. Some fish have so many small bones that it is not feasible to attempt to remove all of them. Fillets are prepared by separating the two lengthwise halves of boned fish. These may be skinned if desired but for some fish such as haddock, mackerel and perch, it is preferable to leave the skin on to hold the meat together during cooking. Head, tail and all small bones should be removed.

One of the most important steps to learning how to clean fish is the storing when it is completed. For storing fish, fresh fish should be kept in the coldest storage space in the refrigerator, well wrapped with paper to prevent the fish odor from spreading to other foods. 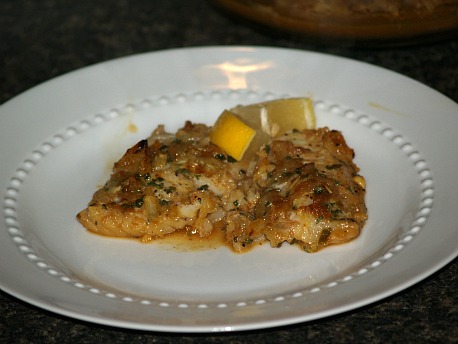 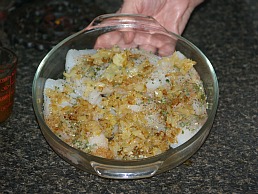 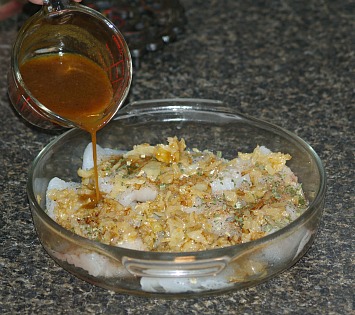 Add soy sauce last and use it liberally because it evaporates.

Bake at 375F degrees for 25 minutes or until fish flakes. 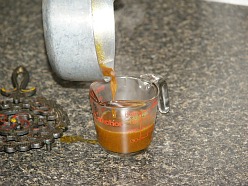 Combine onion with ¼ cup of the butter in large skillet.

Cook and stir over medium high heat until tender.

Drain mushrooms and reserve liquid; add to skillet and REMOVE from heat.

Add the crabmeat, cracker crumbs and parsley to mixture.

Spread some of the mixture over each fish fillet.

Roll up each fillet and place seam side down in greased 13X9 inch baking dish.

Sprinkle with ¼ teaspoon of salt and pepper; PREHEAT OVEN to 400F degrees.

Add flour and ¼ teaspoon salt to saucepan; cook and stir 1 minute until smooth.

Stir in the wine and cook 2 minutes longer; pour sauce over fillets.

NOTE: Fish will flake easily when tested with a fork; serves 8.

Zest the orange then peel, section and chop; place in saucepan.

Over moderate heat cook and stir until thick and bubbly.

Bake about 15 to 25 minutes until fish is flaky.

Serve with sauce spooned over fish.