How to Cook a Half of Ham

There are several reasons for learning how to cook a half of ham. Many years ago when families were larger whole hams were readily available.  Large families like mine would never have considered roasting only a half. A whole ham was great for a special meal, maybe leaving enough for seasoning a pot of beans. Now I find halves of hams are always available in the meat markets but not always so with whole hams. This is partly due to smaller families but also the increase in price per pound makes it impossible for some to buy the whole ham. 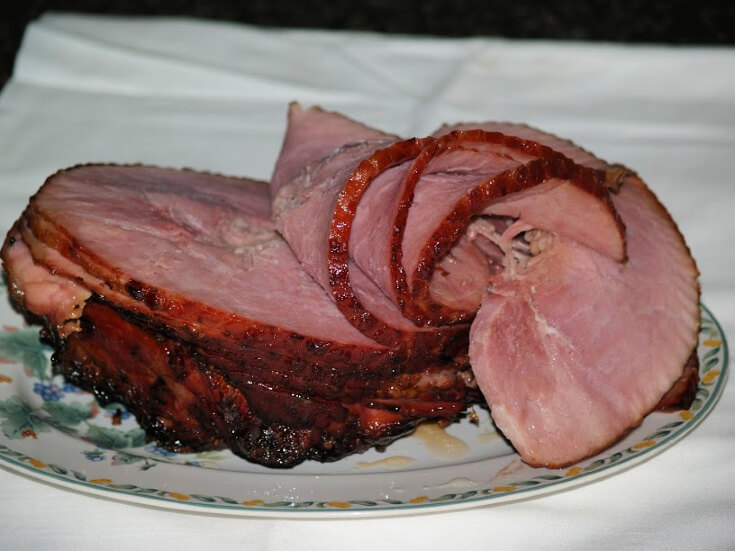 How to Cook a Half of Ham

After I learned how to cook a half of ham, I discovered  another reason why I like cooking the halves. Regardless how hams are cured, I find all hams to be at least a little salty. I like to rid the meat of this extra salt by soaking in water and marinades. The large cut end enables the liquid to soak up in the ham.  When I am reading to cook the half of ham, I place the cut side down.on a rack allowing the extra liquid to drain out, also pulling out extra salt.

As you learn how to cook a half of ham you will see this absorption through the cut also helps to flavor the ham. Many juices like apple or orange act as a seasoning and also cuts down the salty taste. Great marinades can be made by adding ingredients like brown sugar, honey, maple syrup, cinnamon, cloves and others. All these flavors are absorbed through this large  cut of the ham half producing a very delicious presentation when baked.

If you learn how to cook a half of ham you may want to try one of the old fashioned cured hams. I mentioned "salty", these old fashioned ones are really salty. The flavor is wonderful but care must be given to the preparation of cooking before finishing to eliminate much of the salt. Pre-boiling rids the meat of the salt and also eliminates a lot of the extra fat. 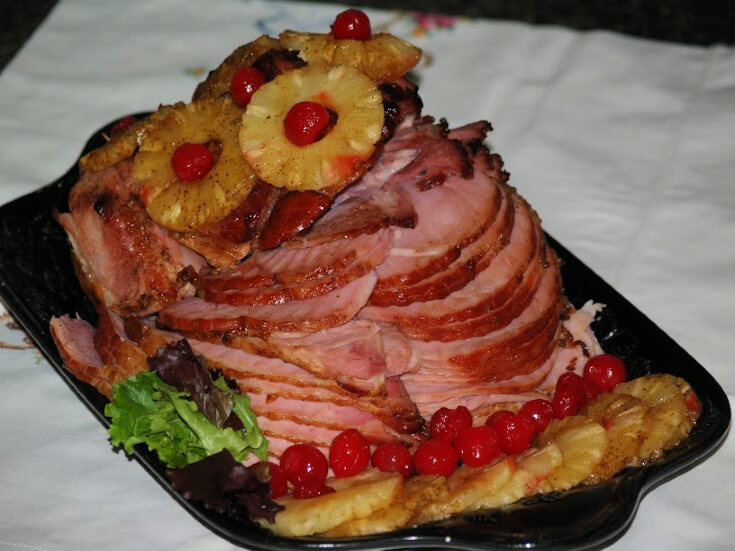 Since I learned how to cook a half of ham this pineapple spiced ham has been one of my favorites.

Place ham half in shallow roasting pan; bake for 30 minutes.

Drain the pineapple reserving 2 TABLESPOONS of the juice.

Arrange pineapple slices and cherries over the ham securing with toothpicks.

Spoon the sugar mixture over the ham (Over top of fruit).

NOTE: Should take about 45 minutes longer. 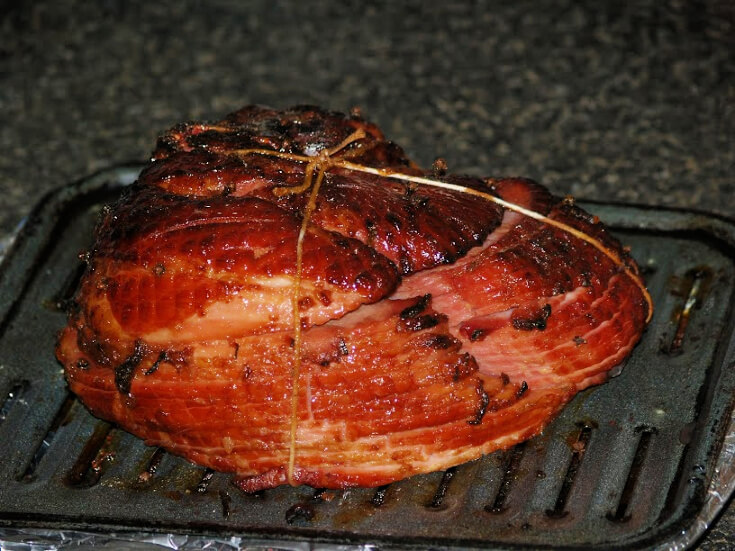 Learn how to cook a half of ham with a delicious flavor of brandy and cloves.

NOTE: Glaze should be spreadable with a brush but not too thin.

Heat and stir over low heat just to blend well; set aside.

Trim excess fat from ham; place ham cut side down on rack in shallow roasting pan.

NOTE: When I have a spiral cut ham, I insert the cloves in those cuts all over ham half. I also press in whole cloves in the end where there are no slice cuts (The more, the better). 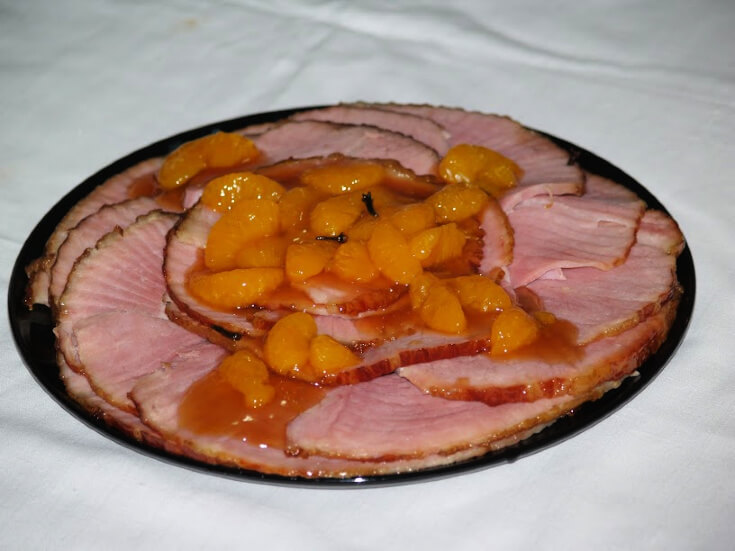 Learn how to cook a half of ham to serve with orange sauce.

Stir in the drained Mandarin oranges; set aside and keep warm until ready to serve.

TO SERVE slice ham and serve topped with orange sauce

Learn how to cook a half of ham with honey butter glaze.

FOR HAM HALF place in a large stainless steel or enamel pot; cover with boiling water.

Press the cloves into the apple; add apple, bay leaf and cinnamon stick to the pot.

Bring mixture to a simmer; cover and simmer until meat is tender when touched with fork.

NOTE: Should take about 3 hours.

NOTE: If pot is too large for your refrigerator, you can use a cooler with ice.Temperature should be kept below 45 degrees.

Remove the layer of fat which formed on top of the broth.

NOTE: This fat is great for seasoning dried beans, green beans and even when baking biscuits.

Trim off excess fat from all over the ham half; place ham on a broiler rack with cut site down.

Score ham half and brush with Honey Butter Glaze; sprinkle nutmeg over the top.

Bake until hot about 30 to 60 minutes brushing ham every 15 minutes with glaze.

Learn how to cook a half of ham with delicious maple flavor.

Place ham with fat side up on a rack in shallow roasting pan.

NOTE: DO NOT cover or add water; bake for 45 minutes.

Pour pan juices into a saucepan; skim off the fat and set aside.

Pour the maple syrup over the ham; return to oven.

Bake ham another 45 to 60 minutes until internal temperature is 140F degrees.

Remove ham from pan and set aside while making the sauce.

Blend the flour into the   reserved pan juices (In saucepan) until smooth.

Stir in the 1 cup of water, mustard and Worcestershire; mix until blended.

Stir in the pan drippings from ham pan with the maple syrup; add maple extract.

Remove from heat and pour into a serving bowl; keep warm.

Slice ham onto a  serving platter and serve with the bowl of sauce.

Learn how to cook a half of ham with oyster grits stuffing.

Cover ham with water and soak at least 24 hours.

Bring mixture to a boil; stir in grits and return to a boil stirring occasionally.

REDUCE HEAT, cover and simmer 10 minutes until liquid is absorbed.

Remove from heat and COOL.

Stir in oysters (OR you can use the chopped ham from the center which you will be removing).

With a sharp knife cut out the center of the ham leaving 1 1/2 inch border.

NOTE: You can use ham to replace oysters or use in other recipes or for sandwiches.

Spoon 4 CUPS of the grits stuffing into the ham cavity.

Tie ham with kitchen string and wrap in cheesecloth; place small end down in baking pan.

Set dish of stuffing aside and keep warm.

Remove cheesecloth from the ham; return ham to roasting pan.

Baste ham with the pan drippings; place under broiler to brown (Watch carefully).

Learn how to cook a half of ham with bourbon glaze and topped with orange slices.

Remove foil from ham; remove skin and excess fat from the ham.

Brush ham with about 1/2 CUP of the bourbon.

Stir remaining bourbon with sugar and mustard in a small bowl; pat evenly over ham.

HOW TO COOK a HALF of HAM with a CHERRY GLAZE

Learn how to cook a half of ham using cherry pie filling.

Place ham half in shallow roasting pan; bake about 40 minutes.

Remove ham from oven and pour drippings from the pan.

Remove cherries  from pie filling and set aside.

Blend mixture and pour over the ham; continue baking ( baste with drippings) until done.

Slice ham on platter and garnish with reserved cherries.

SOUTHERN COUNTRY HALF OF HAM RECIPE

Learn how to cook a half of ham with brown sugar bourbon glaze.

Brush outside of ham half with stiff brush (not the cut side).

Tear off a large piece of aluminum foil; place ham on foil.

Combine and mix the sugar, bourbon and water in bowl.

Cover ham with the sugar mixture; pull up foil around ham and seal.

Place in oven and bake for 6-7 hours until done.

Learn how to cook a half of ham with apple jelly glaze.

Trim any excess fat on outside of ham; score diamond shapes 1/4 inch deep ever ham.

insert the whole cloves all over ham; place on rack in shallow baking pan and set aside.

FOR GLAZE combine jelly, nutmeg, mustard and lemon juice in a small saucepan.

Bring mixture to a boil while stirring constantly.

Brush glaze generously over the ham and place in oven.

Bake for 20 minutes per pound brushing every 20 minutes with the glaze.

Before the last 30 minutes arrange apple rings over ham securing with wooden picks.