How to Cook Bacon

I learned how to cook bacon years ago, when I was still a child. Dad raised hogs so we always had plenty of bacon and all the other pork cuts of meat.  When people talk about bacon, we hear a lot of “terminology” applying to bacon. Of course, some is related to other countries which we might hear from people originating from those countries. Other than these people, we still have various terms applying to bacon here in the United States. 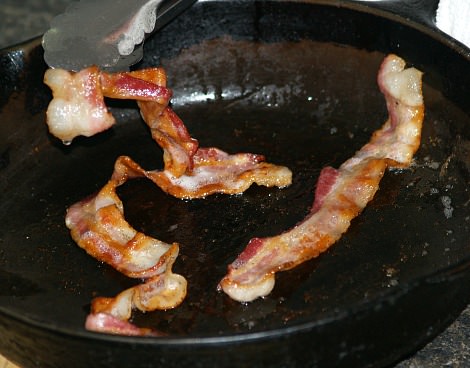 How to Cook Bacon

I learned as I was growing up, the word “bacon” is only applied to cuts coming from the belly portion of the pig. This part has more fat. Aside from the part of the pig, “bacon” is also applied to the curing; it must be smoked. Every fall, after butchering, Dad would smoke the bacon and hams for long periods of time, like weeks (I do not remember exactly how long). After smoking, the meat was actually cooked but I learned how to cook bacon, usually by frying in the skillet.

A while back, I saw a sign in the butcher shop saying” fresh bacon”. I found this to be bacon cured with a large amount of salt, not what I called fresh bacon. We always called this salt pork and it had to be boiled before browning in order to get rid of the “salty” taste. After boiling and draining, it is delicious coated with flour and browned in the skillet.

When I learned how to cook bacon that was “fresh”, it had no curing. We also called it fresh side pork and it was “fresh”. Fresh bacon was always one of my favorites. This “bacon” is cut from the side which is leaner and we usually had it in a thicker cut; maybe about ¼ inch thickness. When I can buy it, I usually fry it and make a sandwich. It is so delicious with mustard, horseradish and a slice of onion.

As I said earlier, I learned how to cook bacon by frying it in our big black iron skillet. The slices ended up ruffled with sections cooked crisply and some sections still fatty. No matter how you cook bacon, it is always delicious, as was this. There is a little difference in taste and appearance depending on how it is cooked. After cooking, we pour the cooled bacon grease in a glass jar for flavoring other foods. This grease adds a lot of flavor if you want to drop in eggs to cook to go with the bacon. 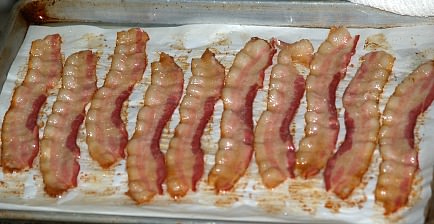 If you are learning how to cook bacon, it can be baked, broiled, grilled as well as fried. Because of the fat content, you would not want to cook it over an open flame; it would cause a big fire. If you want to cook it on a grill with open flames, you need to do it in a large iron skillet keeping the grease out of the flames. Today, if I am going to cook eggs or pancakes with the bacon, I will cook it on the griddle. The bacon can lay flat and looks good, also allowing the same appliance for the other cooking.

I like to cook thicker sliced bacon on the broiler. It is fast, all the fat drips down in the bottom pan leaving the bacon crisp and mostly fat free. The thinner slices do not do well on the broiler. They stick to the pan and tear leaving a bad appearance. My favorite way to cook bacon (For 6-8 pieces or more) is to line a baking tray with parchment paper and place the strips on top of the paper. After baking the bacon at 400F degrees for about 15 minutes, the bacon strips are crisp, flat and very straight. Regardless of how I cook bacon, I always blot it with paper towels, and I always save excess bacon drippings for seasoning.

So far, I have told you how to cook bacon as I do it for breakfast, a sandwich or other times when you want just plain bacon. Bacon is also used in many recipes which utilizes the wonderful flavor for added seasoning. In most restaurants which I have worked, a pan of bacon is kept on hand just for this reason; for soups, salads, dressings, etc. Below are some recipes which would not be the same without the delicious bacon flavor.

NOTE: Many people think that cooked bacon can be left at room temperature for extended length of time with no effect on its quality. This is NOT true! I was told by the health department that bacon after cooking must be refrigerated after 1 ½ to 2 hours.

Learn How to Cook Bacon and Make These Recipes Below:

Combine spinach, strawberries and bacon in a large salad bowl; toss to mix.

To serve pour dressing over salad and toss; sprinkle almonds over the top.

If desired garnish with a couple fresh whole strawberries.

Cover Dutch oven with lid; bring to a boil, reduce heat and simmer until beans are tender. (60 to 75 minutes)

Melt butter and slowly stir in flour; gradually stir in half and half.

Cook and stir mixture over low heat until thickened about 10 to 15 minutes.

Stir in cheese, salt and pepper; set aside.

Layer 4 eggs in a buttered 9X9 inch square baking pan; layer half the bacon over the eggs.

Spread half the cheese sauce over the bacon; repeat layers with eggs, bacon and sauce.

Sauté bacon in skillet until crisp; drain on paper towels and set side.

Sauté onions in drippings until soft; remove pan from heat.

Cover whole potatoes with salted water; bring to a boil and cook for 15 to 20 minutes until tender (Not mushy).

When just cool enough to handle, slice potatoes in a large bowl.

Pour 2/3 of dressing over potatoes; Sprinkle with half of crumbled bacon and ¼ cup of green onions.

To serve combine and blend the potato mixture and shrimp mixture; sprinkle remaining bacon on top. 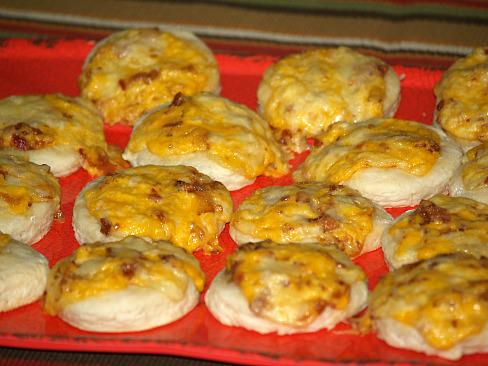 Learn how to cook bacon and make these delicious bacon biscuit puffs. Serve as a snack, on a buffet or any gathering!

Place spoonful of mixture evenly on each biscuit round; bake 10 minutes or until golden brown.

Cover casserole and let stand in refrigerator for 3 hours or longer.