How to Cook Baked Potatoes

When you ask how to cook baked potatoes, you will get many different answers. Some just throw the potatoes in the oven plain, some roll them in oil, some with oil and salt and some people wrap them in foil to bake.

If you are familiar with how to cook baked potatoes, you might recognize the term “Irish potato”. Ireland is so commonly linked to the potato that I thought at one time they held the whole creation of the potato. In actuality, the potato history takes us to the Andes Mountains where they are native. Potatoes were first cultivated by the Peruvian Indians more than 4000 years ago. 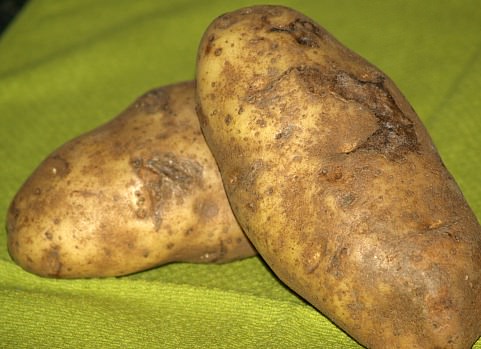 How to Cook Baked Potatoes

The potato history also tells of the Spanish explorers who took this vegetable back to Europe. It became such a major crop there and a very nutritious vegetable that it was specifically grown to feed the poor. For many years this vegetable was the staple for the diet of the poor; quite often it was the only food available to them. My mom always said when I was young if she had potatoes she could make a meal; I guess that is how they thought.

This amazing healthy vegetable is now cultivated worldwide; they are the world’s largest and most economically important vegetable. If just learning how to cook baked potatoes you must know that they are surprisingly low in calories when baked and eaten without all the extras. When eaten with the skin, they are high in complex carbohydrates and fiber. A medium baked potato with the skin provides high amounts of vitamin C, niacin, iron, magnesium, potassium and zinc along with other nutrients.

The types of potatoes that you use when cooking potatoes makes a difference in the final product. When learning how to cook baked potatoes, stick with potatoes like the Russet, Long whites, Goldrush or Norkotah. With experience you might want to try other types of potatoes and compare the taste and texture.

When learning how to cook baked potatoes, the type of crust that you want from the skin of the potato will determine how you bake it. Many people like to eat the skin of a baked potato; this is where most of the nutrient value lies. If you like a soft moist crust on the potato, you will want to wrap it in foil before baking in the oven. If you want the skin to become crispy, then bake it without wrapping.

HOW TO COOK BAKED POTATOES IN BUTTER 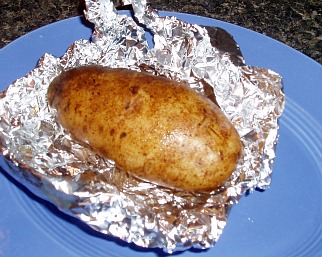 Melt the butter in a baking pan. Brush the potatoes with the melted butter, covering the entire potatoes. Bake uncovered, basting and turning potatoes every 15 minutes until potatoes are tender and golden brown. (Can also sprinkle with paprika, onion powder, parsley or other seasonings) 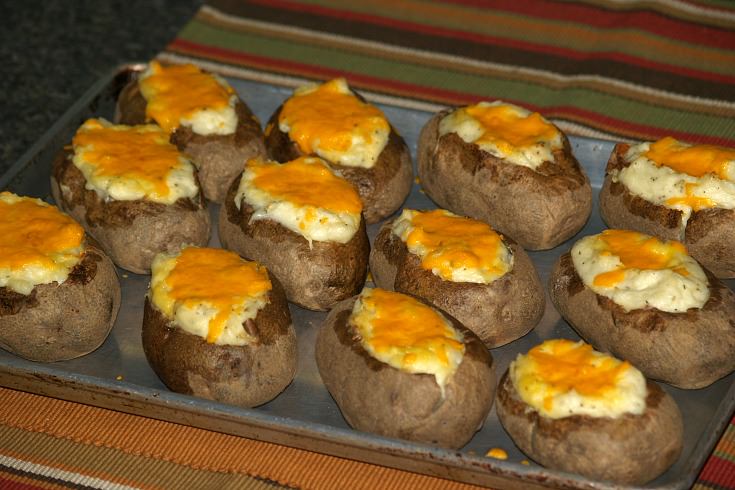 Wash potatoes with fresh clear water and dry thoroughly. Rub skins of potatoes with butter and place in a baking pan. Bake for about 1 hour (more or less depending on size) or until potatoes are tender.

When potatoes are tender, cut a slice off the top of the potato lengthwise to make a deep shell. Scoop out the insides of the potatoes and put in a bowl. Add hot milk, butter, salt and pepper and beat until fluffy as you would mashed potatoes. Spoon potato mixture back into the shells. Sprinkle with paprika, crumbled cooked bacon, chives and grated cheese. Return potatoes to the oven until the cheese melts. 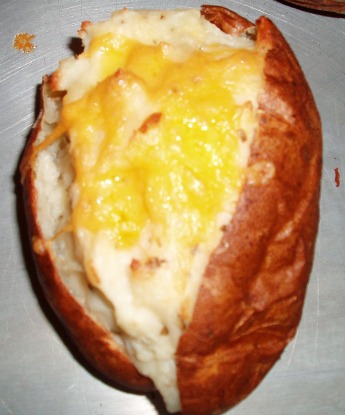 HOW TO BAKE POTATOES SWISS STYLE

How to cook baked potatoes in wedges; this makes a nice side recipe to any meal.

Preheat oven to 375F degrees.
Arrange potato wedges peel side down on greased baking sheets.
Combine and mix remaining ingredients and brush over potato wedges.
Bake for 1 hour or until tender and golden brown.
NOTE: Brush with butter mixture throughout baking until all is used.