How to Cook Chili

When you learn how to cook chili, you will see that it could be classified as the most interesting of all recipes worldwide. There does not seem to be any well known origination of this dish. I always thought it came from Mexico but I am being told they do not want the credit for THIS ONE.

It seems they are not too impressed with our chili. Many think it is a cheap way to produce a large volume of food by using a little meat and other cheap ingredients. 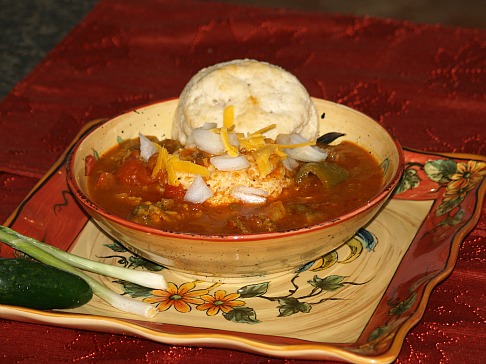 How to Cook Chili

When I learned how to cook chili,  I found that the history of this recipe dates back to the Texas cattle drivers who take the credit for the first chili recipes. The first ones being created in the late 1800s were far simpler than so many of the recipes made today according to the history of chili.

Today no one state or area can prove that they learned how to cook chili first. Many areas across the country (and even in other countries) and individuals brag that their chili is the best. Even though most recipes start with some basic ingredients like meat, tomatoes and peppers, vegetarians will claim that their recipe is the best.

When you learn how to cook chili you will find that even the name of chili can cover a soup recipe, chili con carne recipe, one of many hearty soup recipes or even a stew recipe. There are so many different recipes for this dish and even names. I think no two people make it the same way. It is unbelievable how many different ingredients that I have found being used in the making.

When you are learning how to cook chili, sometimes it is hard to get the “just right” heat. If you are not using the same exact recipe, how do you know?

Here are Some Tips on How to Cook Chili

When you learn how to cook chili, most of your recipes will end up being quite large after adding all the ingredients. For me this is a good thing. So many leftover chili recipes can be prepared very quickly and easily. Leftovers should be divided into the portion sizes that you usually would use and put into freezer containers after the mixture is cool. You can even prepare these in microwave containers or oven containers to freeze them. For instance if you are going to use some as an appetizer, place in baking dish, top with cheese and wrap tightly. When you are ready to use it, thaw in refrigerator, then let set at room temperature for 30 minutes before placing in oven. After heating, serve with chopped onion, sour cream and tortilla chips. How quick and easy is that!


There is a big disagreement over the use of beans in chili. Some people and even areas get very upset over recipes that call for any kind of beans. They claim that beans are not in the original recipe. But what is the original recipe? Does anyone know?

People argue over the texture of chili. Some think it should be smooth, others like the chunkiness of chopped meats and beans. There is also a big disagreement on the thickness of this product. The descriptive words range from soup recipes, hearty soup recipes or even stew dishes.

The chili cookoffs rank at the top of all food contests. The people involved in these are very serious about their recipes and the ingredients that they use. The organizers and judges take their jobs seriously also. The aroma, appearance and texture are important along with the very important taste of the end product.

Some believe you cannot reach the taste of excellence without hours of cooking. I would not classify myself as one of those chili professionals but I do like good chili. I like it thicker, more like a stew than a soup. I prefer it a little spicy and red in color.

Learn how to cook chili using fewer ingredients and less cooking time making them easier than other recipes. The flour serves as a thickening agent rather than cooking the chili over a long period of time to achieve thickness.

Stir flour into beef mixture; stir in remaining ingredients, bring to a boil and stir until smooth.

Reduce heat and simmer for 30 minutes.

This is one of the most famous chili recipes; made famous in Cincinnati, Ohio, it is known for such added ingredients as cinnamon, allspice and cloves. Cincinnatians are known to be quite pig headed about their choice of chili parlors and their families secret recipes. The locals are known to consume more than two million pounds of chili each year. Since the first chili parlor opened in the 1920’s, now there is a chili parlor in every neighborhood. Cincinnati chili has a thinner sauce and is commonly served over cooked spaghetti.

In a large pot, brown beef with onion and garlic; drain off excess fat.

Add beans and ring mixture to a boil while stirring; reduce heat, cover and simmer 3 hours.

The following is a sample of many chili recipes.