How to Cook Foods from Spain

Before learning how to cook foods from Spain, let us talk about the various regions and influences.  The Spanish cuisine has always been blended by the cultures of invaders and visitors. The Romans brought grape growing and wine making. They also introduced the cultivation of olives and the pressing to make olive oil. From Africa, the Moors brought new fruits, vegetables and rich savory spices. From European countries knowledge was gained about growing potatoes, corn, avocados, papayas, peppers and chocolate. Because of the vast difference in landscape (Mountains, seacoasts. lush farmland and pastureland and even irrigated hot dry land) each region utilizes the local available products. 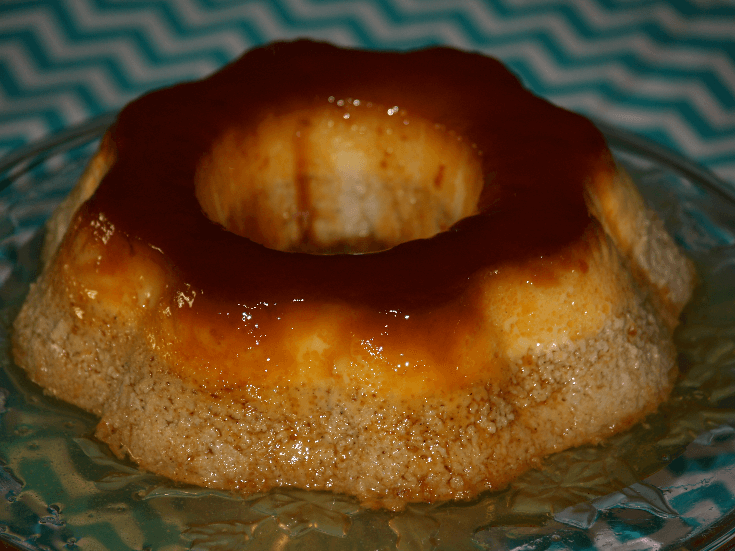 How to Cook Foods from Spain

If you want to learn how to cook foods from Spain check out the ANDALUCIA REGION. It is located in the south with a hot dry climate. It does have a large coastline which makes irrigation fairly easy and fish is a staple. They use irrigation to grow wheat and other grains which was introduced to the area by the Romans. They learned from the Arabs to grow fruits and vegetables. Irrigation was also used to improve growing olive trees which allowed a better production of olive oil. Frying is a very popular way of cooking fish, tapas and all foods due to the production of olive oil. Usually the ingredients are dredged in different types of flour (not batter) before frying.

When you learn how to cook foods from Spain, you will find the cuisine of MADRID is probably the most like New York. This Spanish city is a “melting pot” of food cultures from all over the world. Along with traditional Spanish recipes, over the years all kinds of food have become known as “madrilène”. People from Madrid might tell you to try the squid; French fried on the squid sandwich. Also highly recommended are the roast pig and the famous churros.

The region NORTH OF SPAIN includes areas of Galacia and Asturias. As you learn how to cook foods from Spain, you will see that Galacia is known for its chefs worldwide. Delicacies are made from the variety of high quality products of this region. Savory empanadas made with meat and seafood, Soups made with greens, beans and meats are common on the family table as well as moist homemade breads. Lots of seafood including scallops in the shell is often served at meals. Asturias is a natural sea, mountain and country paradise. This area of green mountains and rugged coastlines consumes lots of fabada bean stew. Also very common is Cabrales blue cheese which is aged in the mountain caves. Here you will also find an abundance of seafood and hard apple cider. Another region north of Spain is the Basque region. Basque Country region has the very popular “male only” gourmet clubs. This area has a tremendous passion for food. Cooks here actually have traditional “Basque” recipes. Many include a spicy smoked paprika for which this area is known. A favorite way of cooking fish and meats is over hot coals.

When learning how to cook foods from Spain let us look at the PYRENEES MOUNTAINS. Located on the border of France this area has a rich history in food. It has been developed over the years from the many different cultures of the world moving through the area. Most common dishes are made with roasted lamb, cured ham, sausages, trout, crayfish and cod, eel and seafood and are often served with rice. Aragon is known for its blood pudding, garlic soup and the most famous stew called chilindron.

CENTRAL SPAIN including region of Castilla-Leon is well known for its traditional hearty foods. They are still simply made with basic ingredients.  When you learn how to cook foods from Spain here you will find roasted meats, cocidos or stews, vegetables and homemade breads.  Always a variety of wines accompany dinner, cheeses and desserts.

The CATALONIA REGION (Cataluna in Spanish) is in the North east part of Spain. Cantalonia cooking, originally the Mediterranean cuisine has picked up influences from the French, Italians, Greeks and Romans. It is known to be the most complex and sophisticated of all Spain. Cooks are known for mixing sweet with sour and including in recipes raisins, nuts, wines, brandy, chocolate and lots of wild mushrooms. Recipes mixing ingredients for casseroles abound.

When you learn how to cook foods from Spain, you will find the EASTERN REGION, including the area of Valencia is part of the larger Mediterranean cuisine. This area makes a large variety of rice based recipes like paella. Locally grown fruits, wines and homemade soft drinks are often found combined in rice dishes.

The BALEARIC ISLANDS are located between Spain and the North African coast. These islands have been influenced by the food and seasoning of the many ruling cultures; Greeks, Arabs, Romans, French, English and other cultures. Each island retains its own independence and culture. Each takes advantage of its local availability of products.   This includes a diet rich in seafood, beans, grains and vegetables but low in fat. For the “sweet tooth” there might be ensaimadas sprinkled with powdered sugar or small cottage cheese tarts. These islands famous for the creation of mayonnaise (So it is said; others also claim this fame.) 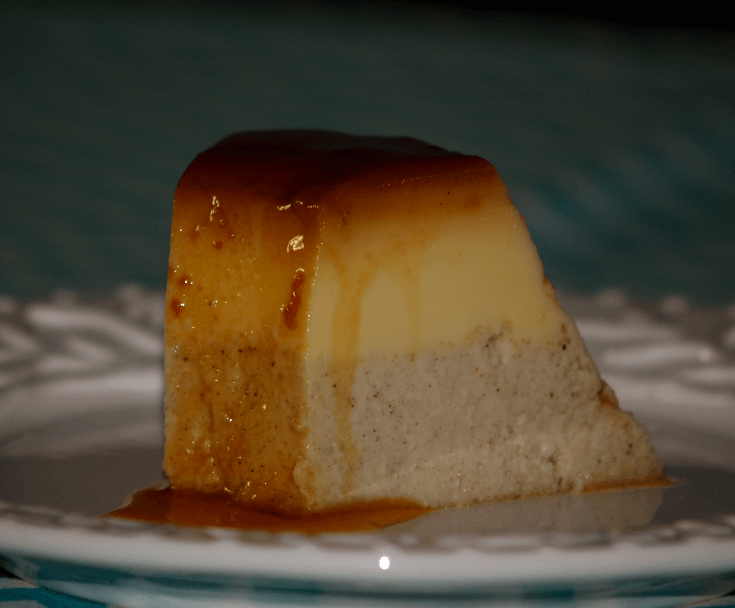 Learn how to cook foods from Spain and other Spanish countries with many flan recipes.

In small heavy saucepan combine ½ cup of sugar, and water; stir together to dissolve.

Bring mixture to a boil over high heat; WITHOUT STIRRING cook 5 minutes until amber color.

In medium saucepan bring half and half to a gentle boil; stir in cinnamon and nutmeg.

In a large bowl whisk eggs and yolks with remaining sugar, liqueur and vanilla for 1 minute.

Slowly stir in half and half; pour into ramekins dividing equally.

Place ramekins in roasting pan; add boiling water to roaster to come HALF WAY up sides of ramekins.

Bake until flan is just set about 30 minutes; move ramekins to rack to cool.

Refrigerate ramekins until cold; run knife around edges and invert onto plates. 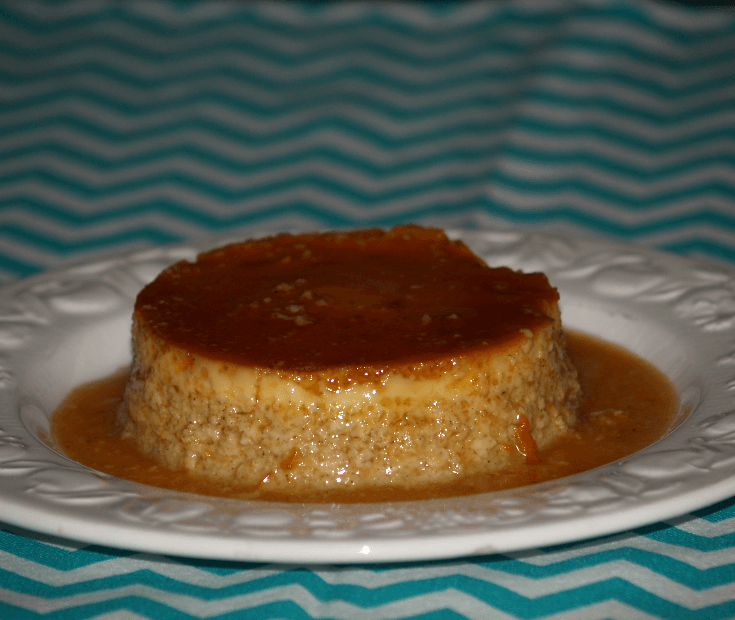 Many recipes will include fish and potatoes when you learn how to cook foods from Spain.

Drain the fish and cut into small pieces.

Cover and cook fish in boiling water about 10 minutes until tender;

Drain fish and rinse in clean water; cool fish and flake with a fork.

In a large skillet cook potatoes and onion in hot oil until lightly browned stirring constantly.

Remove from heat and add water.

Cover skillet and cook over low heat for 15 to 20 minutes until potatoes are tender; set aside.

Melt butter in a saucepan; stir in flour, salt and pepper.

Add milk all at once to saucepan; cook and stir until bubbly.

Cook and stir 1 to 2 minutes longer; set aside.

Fold together the stiff egg whites and whipped cream; spread on top of mixture in baking dish.

Bake in oven for 13 to 15 minutes until golden brown and thoroughly heated; sprinkle with parsley.

Learn how to cook foods from Spain like this dessert from Valencia.

Bring milk to a boil in saucepan; add hot milk to cream mixture and whisk until smooth.

Cook mixture in top of double boiler over hot water until thickened.

Combine the ½ cup sugar and cinnamon; sprinkle on top of cooled cream and refrigerate.

HOW TO COOK FOODS FROM SPAIN like PAELLA RECIPE 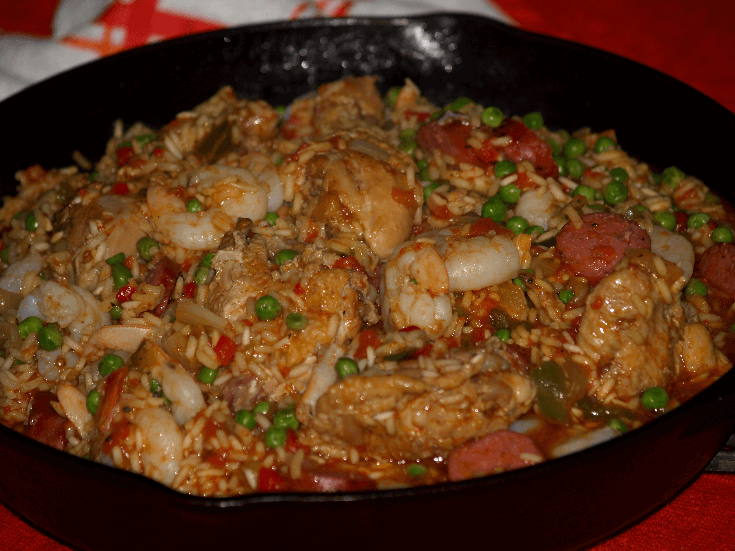 When you learn how to cook foods from Spain you will find many recipes for paella.

NOTE: I leave mussels out when I cannot buy locally.

In covered skillet heat sausages with ¼ cup of water to simmering; cook 5 minutes.

Remove sausages from the skillet and cool slightly; cut in ½ inch slices and reserve drippings.

Add oil to drippings in skillet; heat until hot over medium.

Cook chicken legs and thighs in hot skillet until browned on all sides.

Stir in tomatoes with liquid, salt, cinnamon and pepper; heat to boiling.

Reduce the heat to low; cover skillet and cook 30 minutes until chicken is fork tender.

Combine saffron with 2 tablespoons hot water; add to the chicken.

Add the rice and pimientos to the chicken mixture; heat to a boil over high heat.

Reduce the heat to low, cover and cook for 15 minutes; stir mixture occasionally.

Stir sausage pieces, shrimp and peas into the mixture; place the mussels on the top.

Cover skillet and simmer 5 to 10 minutes longer until mussels open, rice is tender and liquid is absorbed.

Serve from the skillet at table; serves 8 to 10.

When you learn how to make foods from Spain, check out all the good desserts.

Gradually stir half of hot chocolate mixture into beaten egg yolks; return all to saucepan.

Cook and stir over low heat about 2 minutes longer until thick and glossy.

Remove from the heat and cool to room temperature.

Fold small amount of the egg whites into chocolate mixture.

Spoon about ¼ cup of the mixture into dessert dishes; cover and chill several hours.

Learn how to cook foods from Spain with this soup from Valencia.

Place ham hock, beef and pork in soup pot or Dutch oven; cover with water and bring to a boil.

Chop the greens and add to the pot; add nutmeg and beans and cook over low about 30 minutes.

In a skillet sauté onions, green pepper and garlic in melted bacon grease; add to pot.

Add the chorizos and salt to the pot; cover and cook 45 minutes longer until beans and potatoes are done.

Learn how to cook foods from Spain with this recipe for lunch or light dinner.

Bring to a boil, reduce heat, cover and cook 45 minutes over low heat.

In a skillet fry bacon, onion and paprika in the lard; add to the beans.

Add potatoes and saffron to the beans; salt to taste.

When potatoes are tender add the sliced chorizo; Serves 6.