How to Cook Grits

Do you know how to cook grits? That is a popular question all through the South. Before my first visit to Florida, I had never heard of grits. When stopping to eat along the way, we were constantly encouraged to try them. I was a young wife and mother and really wasn’t interested seeing all the other good food on the menu. Remember, it was rare that we ever ate in a restaurant. I certainly did not want to waste this opportunity on something which sounded “not so good”. 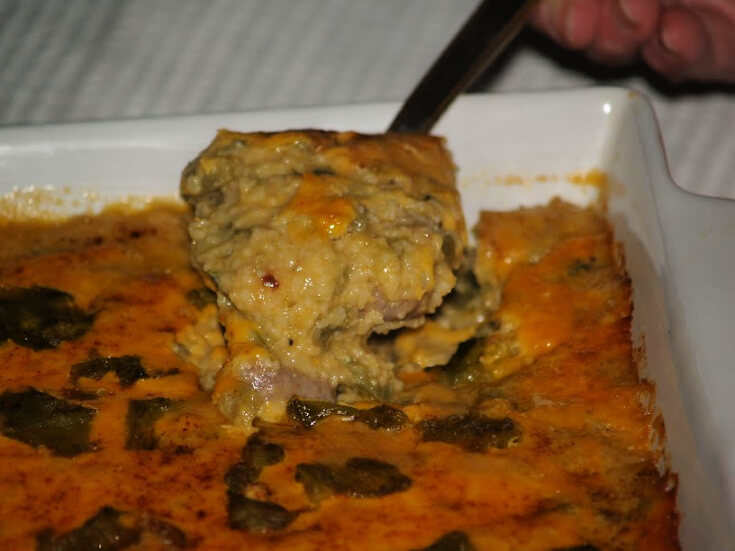 How to Cook Grits

By the time we arrived in Florida, I knew a lot about the history of this popular food. The fame of grits all throughout southern United States is attributed to the Native American Indians. Grits are made by grinding dried corn into a fine to coarse texture.  Grits are now readily available for purchase in the supermarkets. Most common are the “instant or quick cooking grits”. This type is made from the corn which has been hulled and the germ removed.

Since I learned how to cook grits I learned that I do not care for the instant or quick cooking type. Many restaurants do serve this easy to fix type. I realized that this is what really turned me off from the beginning. The look of this instant type, when presented is like a very fine white porridge.  I am not saying to never use this type but they need a lot of other ingredients to “doctor” them up. Lots of butter, cheese and seasoning will help. When I finally tried good home cooked grits made from the old fashioned or stone ground grits, I found out why everyone is so “hooked” on this food.  They are delicious!

When I learned how to cook grits, I found it is just as easy and not much longer to cook the regular uncooked version of grits.  I love grits cooked in many different types of recipes. Grits are really popular for breakfast alongside bacon, sausage or ham with eggs. They also make great side dishes when dressed up with cheese and/or vegetables. Great casseroles can be served also as side dishes but also as a main entre dish. Most of the time grits can be cooked on the stove top but sometimes are baked as well like the casseroles. Creamy grits also make delicious sweet puddings.

HOW TO COOK GRITS WITH SHRIMP 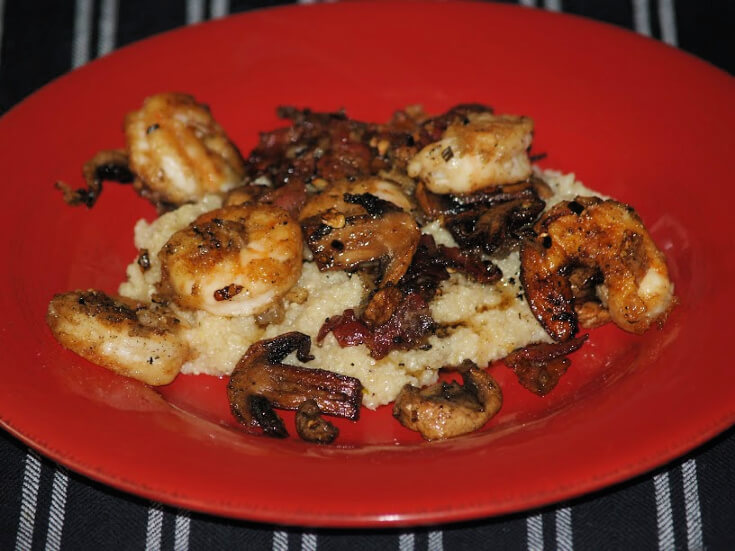 How to Cook Grits with Shrimp

Learn how to cook grits as a main entree.

Cook grits first because the shrimp does not take long.
START GRITS by combining water and bouillon in large saucepan.
Bring mixture to a boil and stir until bouillon is dissolved.
Gradually add grit while stirring briskly; REDUCE HEAT to low.
Cook stirring constantly until thickened about 35 minutes.
FOR SHRIMP first brown bacon pieces in skillet stirring occasionally until crisp.
Drain bacon on paper towels reserving bacon fat in skillet.
NOTE: You will need 2 to 3 tablespoons. Add oil if needed to make this amount.
Toss the shrimp in flour until lightly coated shaking off excess.
Cook shrimp in skillet over medium high heat until pink; remove to plate.
NOTE: Cook shrimp quickly about 1 minute turning over one time. (Do not overcook).
Add mushrooms and bacon pieces to skillet; cook and stir 1 minute.
Stir in the garlic; add hot sauce, lemon juice and green onion stirring to blend.
Return shrimp to skillet with mixture; stir 1 minutes until and remove from heat.
Serve immediately over cooked grits; serves 6. 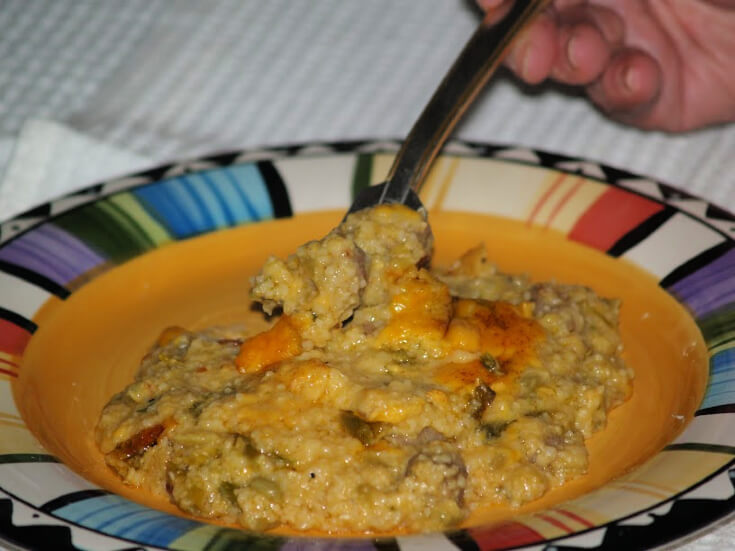 Learn how to cook grits in a baking dish.

Preheat oven to 325F degrees.
Combine water and salt in medium saucepan; bring to a boil.
Add grits and cook until thickened about 20 to 25 minutes.
In skillet sauté sausage stirring into small pieces until done.
Remove sausage from skillet and drain leaving the fat.
Add onion to skillet; sauté until tender and drain.
Add onion and chilies (reserve some for topping) to cooked sausage; set aside.
Add the butter, eggs, cheese and hot sauce to the grits; stir in.
Combine the sausage mixture with the grit mixture;
Pour mixture into a 9X13 inch baking dish.
Top with additional grated cheese, chilies, paprika.
Top mixture with parsley and bake for about 45 minutes.

Learn how to cook grits by making this shrimp butter to serve over plain cooked grits.

Combine butter and next 7 ingredients in food processor.
Process until well blended; add shrimp to mixture.
Process until shrimp is only chunky; serve with hot grits.
Makes 4 cups.

Combine salt and water in a large saucepan; bring to a boil.
Add grits; REDUCE HEAT, cover and simmer 30 to 40 minutes until thickened.
PREHEAT OVEN TO 350F degrees.
Add to grits butter, cheeses and Worcestershire sauce.
Stir mixture until butter and cheese melts; place in a greased baking dish.
Sprinkle with paprika and bake 15 to 20 minutes; serves 8 to 10.

Learn how to cook grits with Boursin cheese.

In a medium saucepan bring water to a boil over high heat.
REDUCE HEAT to medium; add grits, salt and pepper.
Whisk mixture constantly until it returns to a boil; REDUCE to LOW.
Simmer stirring occasionally until thickened about 45 minutes.
PREHEAT OVEN TO 350F degrees.
Add the butter and cream; whisk until well blended.
Stir in the cheese and hot sauce until cheese is melted and smooth.
Pour into 8 ramekins (4 Ounces each) or 1 Quart baking dish.
Bake ramekins for 20 minutes (Or 30 minutes for quart); serves 8.

FOR GRITS combine in a large saucepan the chicken broth and cream.
Bring to a boil and stir in the grits; stir and cook until boil returns.
REDUCE HEAT, cover and simmer 25 to 30 minutes stirring often.
Gradually stir in milk for desired thickness; stir in butter, cheese and pepper.
FOR GREENS remove and discard stems and discolored spots.
Wash greens thoroughly; drain and cut into pieces.
Combine the greens and 1 cup chicken broth in large skillet; bring to boil.
Cover skillet, REDUCE HEAT and simmer 5 minutes until tender.
Drain the greens and plunge into ice water; drain well on paper towels.
Stir greens into grits mixture; cook until thoroughly heated.
Place mixture in serving dish and garnish with bacon; serves 6 to 8.

Learn how to cook grits with chicken.

In a large saucepan bring broth to a boil; stir in grits.
REDUCE HEAT, cover and simmer until thickened about 40 minutes.
PREHEAT OVEN TO 375F degrees.
Add chicken, cheese, eggs and seasoning; stir to blend.
Pour mixture into a greased baking dish 7X11 inches.
Bake for 30 minutes; serves 4 to 6.

Learn how to cook grits with this easy “make a head” recipe.

Bring broth to a boil in a medium saucepan; stir in grits and 1 CLOVE garlic.
Cover, REDUCE HEAT and simmer for 20 minutes stirring occasionally.
Remove from heat; add cheese, butter and 1 TEASPOON black pepper.
Stir mixture until cheese melts; set aside.
Cook 1 CLOVE garlic in olive oil in a large skillet over medium high heat.
Stir constantly until tender; REDUCE HEAT to medium.
Add rosemary and mushrooms; cook until browned about 10 minutes.
Remove from heat; stir in parsley, salt and ¼ TEASPOON pepper and cool.
Spoon half of grits into a lightly greased 9X13 dish; top with mushroom mixture;
Spoon remaining half of grits over the top; cover and refrigerate for 8 hours.
TO SERVE cut into squares; broil 5 ½ inches under the heat for 5 minutes.
NOTE: For electric oven broiler leave oven door slightly opened.
Serves 8.

Learn how to cook grits with lots of garlic flavor.1 Whole bulb garlic

Preheat oven to 350F degrees.
TO PREPARE GARLIC cut off flat end of garlic bulb.
Spread apart cloves leaving on tight outer covering.
Trim pointed end so bulb will sit flat in small ovenproof dish.
Drizzle garlic bulb with olive oil; cover with lid or foil.
Bake for 1 hour until golden; cool.
Squeeze the pulp out from each clove of garlic into food processor.
Process until smooth; set aside.
FOR HAM cook in vegetable oil in skillet over medium high heat.
Stir ham constantly until browned; drain on paper towels and set aside.
FOR GRITS bring broth to a boil in a large saucepan; stir in grits.
Cook over medium heat until thickened (About 40 minutes) stirring often.
PREHEAT OVEN 350F degrees.
Remove grits form the heat; add garlic puree, butter, salt and pepper.
Combine milk and eggs and stir into the grits; fold in ham, Swiss and spinach.
Grease 11X7 inch baking dish; sprinkle bottom and side with Parmesan cheese.
Spoon grits mixture evenly into dish; bake for 45 minutes until puffed and firm.
Serve immediately; serves 8.

Cook bacon in a large skillet until crisp; drain bacon on paper towel.
Crumble bacon and set aside; reserve 2 tablespoons drippings in skillet.
Add onion and green pepper to skillet; sauté until tender.
Add tomatoes, garlic and basil to skillet; bring to boil, REDUCE HEAT, simmer 30 minutes.
Bring water and salt to a boil; add grits and simmer until thickened about 30 minutes.
Remove grits from heat and stir in tomato mixture; spoon into serving dishes.
Serves 8.

Learn how to cook grits making a sweet pudding.

Combine water and salt in medium saucepan; bring to a boil over medium heat.
Gradually stir in the grits; cook and stir occasionally for 5 minutes.
Gradually stir in the milk returning to a boil; remove from heat.
Stir in the butter and set aside; PREHEAT OVEN TO 350F degrees.
Beat eggs and sugar until frothy and light; stir in ¼ of hot mixture slowly.
Return egg mixture to the remaining hot mixture stirring constantly; stir in raisins.
Pour mixture into a buttered 1 ½ -2 quart baking dish; place in larger pan.
Pour hot water into larger pan to 1 inch depth; bake for 1 hour stirring 3 times.
Sprinkle with nutmeg and serve; serves 4 to 6.