How to Cook Pears

I found that learning how to cook pears is just like cooking apples. Even the taste is similar although I think the pears are a little milder in flavor. It is because of this mild flavor that they can be made into such a wide variety of recipes. We always think of pears as a sweet dessert and they do make those. Pear pies, cakes, cobblers, custards and simple poached pears are just to name a few.  Some may be surprised to know that they also are delicious when added to savory recipes like well seasoned salads, savory stuffing recipes and various entrée recipes. 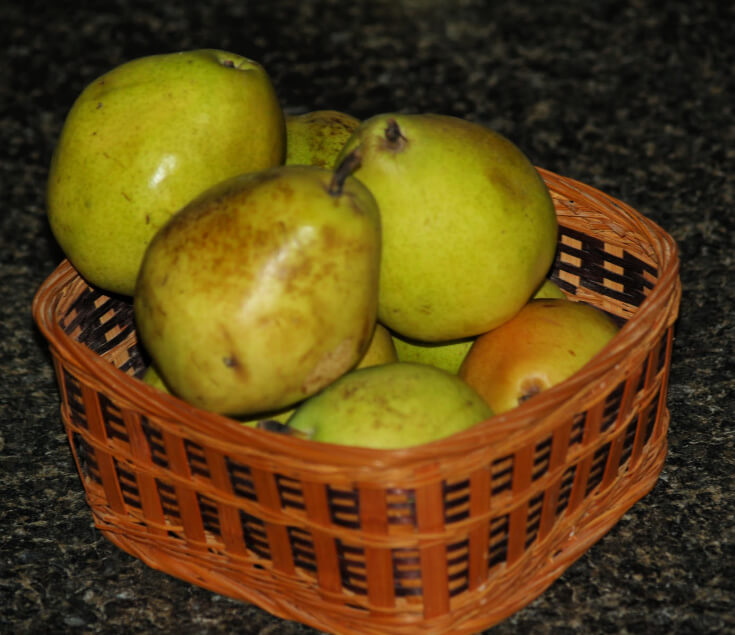 How to Cook Pears

When I was young, learning how to cook pears meant using canned Bartlett pears. Back then pears were not as easily available as they are today. Produce markets were not filled all year round with every fruit of the world like today. Mom bought fresh pears during the harvesting time of the year. They were not as plentiful like apples in our area so we might have had pears about two weeks of each year. If we wanted pears at other times of the year, we settled for canned pears. I am not complaining because I love canned pears also.

Since I have spent more time learning how to cook pears, I mainly focus on cooking fresh pears. In recent years I happened to stumble upon Asian pears. I have never cooked any of these but they are delicious to eat raw. I really do not think they would be good for cooking, at least not near as good as eating raw. They are so sweet, crunchy and juicy to eat making a great delicious snack food.

As I mentioned earlier the Bartlet pear is most common for canning by commercial canners. It is a good tasting pear but I usually buy the Bosc pear since I have learned how to cook pears. This pear has been delicious in all my recipes and I also love the flavor when eaten raw. Occasionally I do purchase the Anjou pear when available but I prefer the Bosc pear. My choices of pears are still not as good like purchasing apples, even in peak harvesting season.

When purchasing pears, try to find firm ones which have no apparent blemishes. You will want to cook the pears when they are ripe but NOT overripe and they do ripen quickly. The skin of the pears will get tough and rough to the touch so remove the peeling before cooking (UNLESS OTHERWISE INSTRUCTED). Like apples, after removing the skins or when slicing, the pear will turn brown from the air if you let stand. To prevent this browning, coat the pears or slices with lemon juice and then drain well. 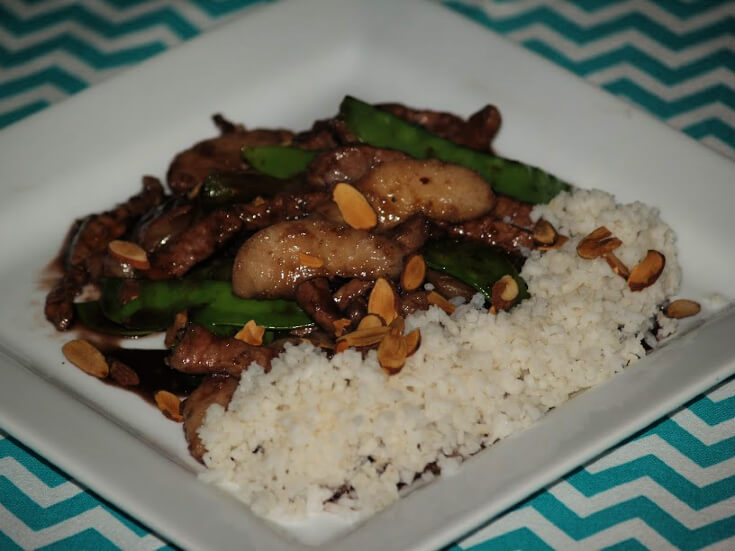 Learn how to cook pears in this Asian influenced recipe.

Combine in a small bowl the plum preserves and the next 5 ingredients; set aside.
Heat oil in a large skillet; stir fry the bell pepper, ginger and garlic about 2 minutes.
Add pears and stir fry 1 minute; remove from skillet and keep warm.
Add the pork strips and stir fry until no longer pink 2 to 4 minutes.
Return the pear mixture to the pan; add the water chestnuts and plum mixture.
Bring mixture to a boil stirring for 2 minutes; add peas and heat thoroughly.
Sprinkle top with almonds and serve with cooked rice; serves 4. 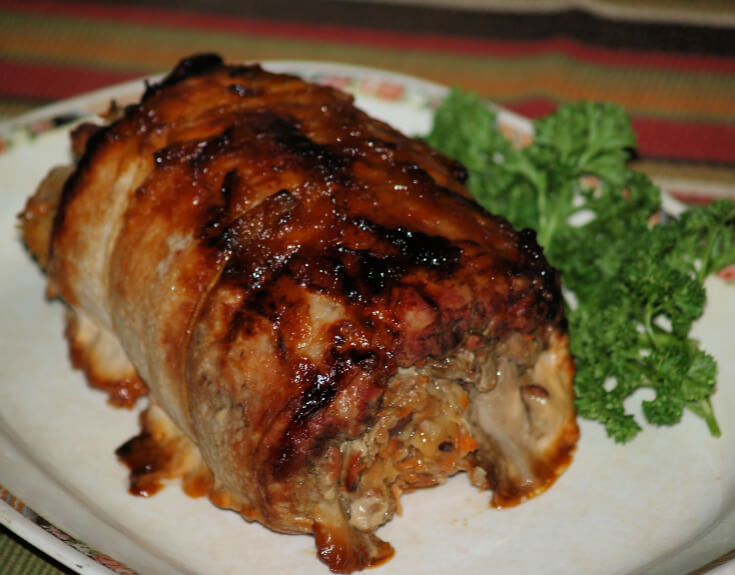 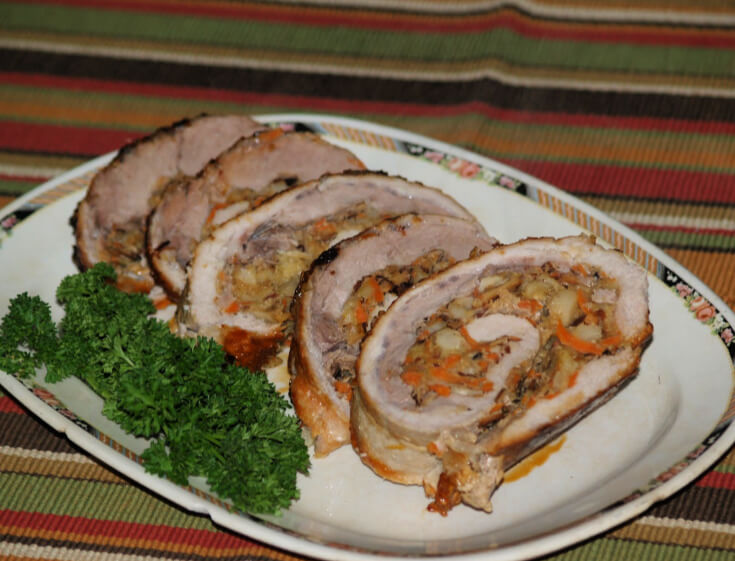 Learn how to cook pears with this stuffed pork recipe.

Preheat oven to 425 F degrees.
Combine and mix in bowl the pears and next 8 ingredients; set aside.
Cut a slit in the loin lengthwise to ¼ inch at bottom.
Open the meat laying it flat; pound to flatten to an even ¼ inch thickness.
Spread the pear mixture evenly over the flattened tenderloin.
From the long side roll up tucking in the ends; secure with wooden picks (or string).
Place roll on a rack in shallow roasting pan; brush lightly with vegetable oil.
Bake 20 minutes; spoon brandy marmalade mixture over top. 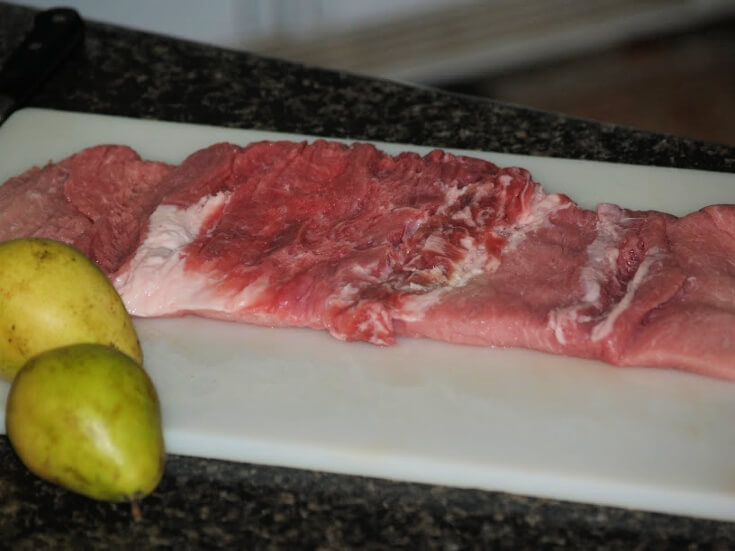 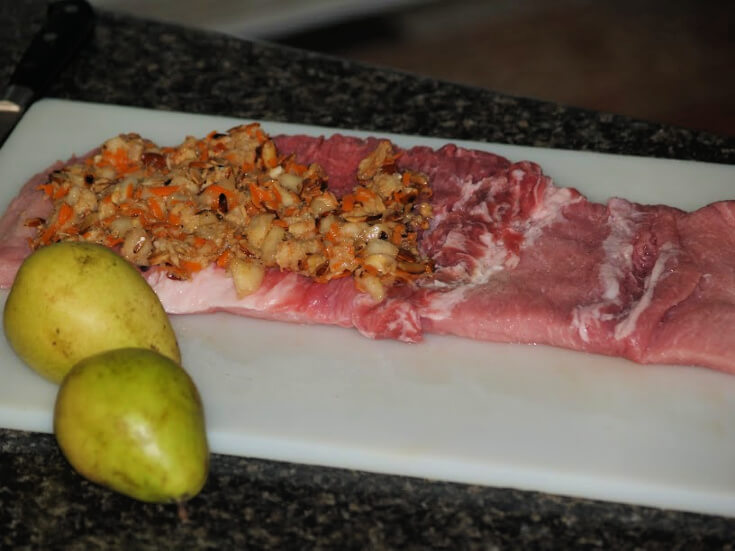 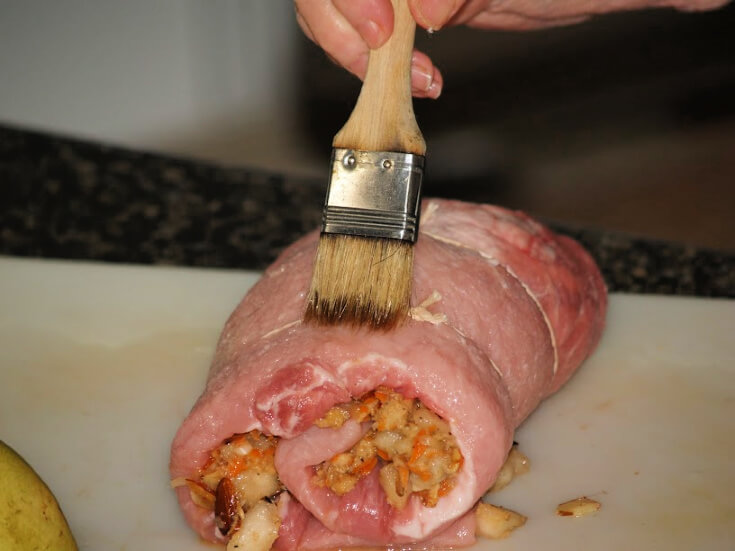 Learn how to cook pears with this flavorful gratin dessert.

In a small bowl combine the sugar, flour and cornstarch; set aside.
In a small mixing bowl beat with mixer the egg and egg yolk until thick.
Add the sugar mixture beating until well blended; set aside.
In a medium saucepan heat the cream until hot but do not boil.
Gradually whisk about a fourth of the hot cream into the egg mixture.
Whisk in the remaining hot cream; place mixture back in saucepan.
Cook and stir over LOW heat until thickened; remove from heat stirring 1 minute.
Dump mixture into a bowl; stir in the butter and vanilla.
Cover bowl with plastic wrap; refrigerate at least 2 hours or overnight.
Combine the cream cheese and blue cheese in small bowl; beat until smooth.
Fold cheese into the chilled mixture; divide evenly into 4 oven proof custard cups.
Place and inverted pear half in each; sprinkle top with powdered sugar.
Place dishes in larger pan or on a tray; place under broiler 1 ½ minutes or until light brown.
NOTE: Place about 5 ½ inches from heat source; leave oven door partially opened.
Combine walnuts and gingersnap crumbs; sprinkle evenly over gratin.
Broil another 30 to 40 SECONDS; serve warm.
Serves 4.

HOW TO COOK PEARS with HONEY

Learn how to cook pears into pear honey; great with hot biscuits or for gifts.

Learn how to cook pears by using this no cook salad recipe.
Dressing

Press raspberries through a sieve reserving the juice; discard seeds.
In a jar combine the oil, vinegar, sugar, pepper and reserved juice; shake well.
In a small bowl toss the pear slices with the lemon juice; drain.
In a large salad bowl combine the greens, pears, pecans and raspberries.
Sprinkle the top with the cheese; drizzle with the dressing.
Serves 8.

Learn how to cook pears in these tasty individual deep pies.

Learn how to cook pears by making a sweet marmalade.

Learn how to cook pears in a delicious hot pear soup?

In a large Dutch oven cook the bacon in the oil until crisp.
Remove pan  from the heat; drain the bacon..
Crumble bacon and set aside; reserve the drippings in the Dutch oven.
Remove the root, outer leaves and top of leek; rinse and slice thinly.
Peel the squash, discard seeds and cut into 1 inch pieces; set aside.
In the drippings in Dutch oven cook leek, garlic, onion and celery until tender.
Add the squash, pears and chicken broth; bring to a boil and cover.
REDUCE HEAT and simmer for 50 minutes or until squash is tender.
NOTE: Add up to 2 cups of water if needed to keep from sticking.
Process batches of the soup in a food processor until smooth; return to pan.
Bring soup to a boil, REDUCE HEAT and stir in whipping cream.
Cook and stir constantly until thoroughly heated.
Ladle soup into bowls; sprinkle with crumbled bacon and parsley.
Makes 8 cups.

When learning how to cook pears you will find many recipes require no cooking.

Learn how to cook pears making this elegant dessert recipe.

Unfold the piecrust one at a time on a lightly floured surface.
Roll each into a 10 inch square; cut each into 1 inch strips.
Starting at the bottom of the pear; begin wrapping with 1 strip.
With strip 2 wrap around pear overlapping ¼ inch.
Continue wrapping moistening strips with water.
Join strips at the ends wrapping until pear is completely covered.
Place pears on baking sheet as they are wrapped.
Combine egg yolk and water; brush evenly over the pastry.
Bake for 1 hour or until tender.
FOR SAUCE combine caramel topping and milk in top of double boiler.
Bring water in bottom to a boil; REDUCE HEAT to low.
Cook and stir until smooth; stir in Grand Marnier and lemon juice.
TO SERVE place each pear on serving dish; spoon 2 -3 tablespoons sauce over top.