How to Cook Soup

I started learning how to cook soup many years ago. There are many different foundations or basic liquids from which they are made. They could be just a simple broth made by boiling some type of meat, poultry or fish or just the bones. After cooking, remove the meat and bones from the broth; quite often it is strained and then served in a small cup.

A recipe does not have to have any other ingredients in it or it could only have spices. Because of the lightness of this hot broth, it is very commonly served when someone has been sick. It could also be made with a commercially made soup stock and water.

As I was learning how to cook soup I found that by adding starches like potatoes, barley, rice or pasta will make hearty and more filling. Some of the recipes like cheese, cream of mushroom, cream of potato and other vegetables are made by adding whipping cream, milk, sour cream, cheese or even a flour roux to thicken the base. The ingredients can be chopped or the entire contents can be pureed in the blender to make it smooth. This type of soup is also very filling and hearty.

When I learned how to cook soup I found that many of these recipes make a great meal on their own or a perfect complement to a full course dinner. Although there are recipes which are served cold and especially good for the hot summer months, soups are generally thought of as cold weather recipes.

Nothing warms the body faster when coming in from freezing temperatures than eating a hot bowl of heavy soup. Almost any ingredient can be added to a pot to cook up a delicious hot soup. I love hot soups in the winter; I have so many favorites I don’t know where to begin.

HOW TO COOK SOUP like this CREAMY CHEESE SOUP

Saute' onion and celery in butter on medium heat until tender, but not brown. Blend in flour. Add chicken broth and diced carrots. Cook until carrots are tender. Slowly add half & half, salt and paprika. Keep stirring as the mixture heats. When it is hot, but not boiling, add the cheese. Stir well and serve hot. 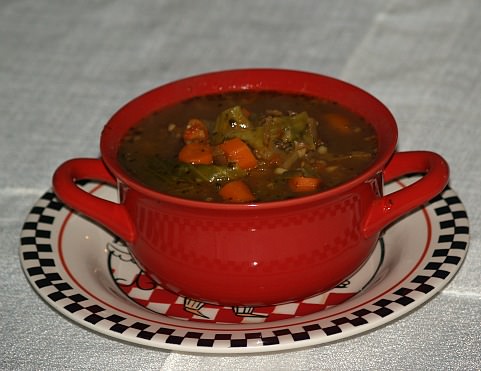 How to Cook Beef Vegetable Soup


Place 2-3 POUNDS CHUCK ROAST in a large roaster pan. Sprinkle with SALT, PEPPER, GARLIC POWDER. Pour 2 CUPS WATER around roast. Chop 2 ONIONS on top of meat. Cover and bake at 350 degrees about 2 HOURS or until done. Remove roast from pan and cut into smaller pieces. Then return it to the pan and add:

Stir all together and return to oven for 1 1/2 hours. This makes a lot of soup, and is great for putting into smaller containers and freezing for later use.

This is one of my favorite soups; the sherry makes it!

Using at least a 2 quart saucepan, saute onions on medium heat in olive oil until tender. Add water and beef stock and bring to a boil. Add Sherry. Stir and remove from heat. To serve, put a piece of toast on the bottom of the bowl. Ladle the onion soup over the toast. Cover top of soup with Swiss cheese. Return bowls (best to set on a tray in oven) to the oven until cheese is hot and melted.

I added this cream of pumpkin soup later in my life. I just couldn’t think past pumpkin pie, pumpkin bread and pumpkin cake; not soup. Finally I decided to make a pumpkin soup. Oh, how delicious!

Season pumpkin with salt and pepper. Put into a large pan with celery. Cover with chicken stock and simmer until pumpkin is soft-about 30-40 minutes.

Remove from heat and pour batches into the blender until all has been blended and is smooth. Return to the pan, add milk and heat until hot. Do not boil. Sprinkle with nutmeg, if desired, before serving.

This is one of the easiest soups to make. When I am in a hurry, especially in the winter months, I will whip this one up. It is very delicious and no one would guess how easy it is.

Put asparagus in blender until smooth. Put it into a saucepan. Add half & half, butter. Add salt and pepper to taste. Bring to a simmer, but do not boil. Serve hot.

There has never been a time when I haven't known how to cook soup with potatoes. This easy potato soup has been in my life as long as I have been alive. It is the best cream of potato recipe and so easy to make. It was a staple as a child and a staple as I raised my children. Now through the winter months, it is still one of my staples.

Saute onion with the butter until tender, not brown. Add diced potatoes. Barely cover with water. Simmer until the potatoes are soft. Add the milk, salt & pepper. Sprinkle with fresh chopped parsley when serving.