How to Cook Spaghetti Squash

When learning how to cook spaghetti squash, it is like the other squash; it can be used as a sweet dessert or as a main meal dish.

This winter squash is also known as vegetable spaghetti or noodle squash. This is one of my favorites and I fix it most often like I would spaghetti. After splitting in half and cleaning out the seeds, I bake them until tender. While they are baking, I cook a sauce with fresh tomatoes, garlic, chopped fresh basil, salt and pepper. When the spaghetti squash is tender, I scoop some of the sauce on top; top with fresh grated Parmesan cheese and serve. This is my favorite way to teach someone how to cook spaghetti squash. How delicious! 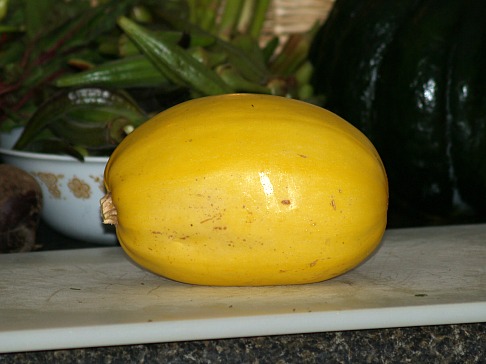 How to Cook Spaghetti Squash

The spaghetti squash is recognizable by its color of ivory to pale orange. The center is full of large seeds and the flesh is an orange color. After baking this squash, picking at the flesh with a fork will reveal spaghetti like fibers. It can be boiled, steamed or micro waved as well as the baking. As in most squash, it is loaded with many nutrients and low in calories.

If you do not know how to cook spaghetti squash or have a favorite way, you will find different recipes instruct you to do it in various ways. Some people think that you treat spaghetti squash a little different from other winter squash. Instead of cutting it in half first (like I do), they believe that it should cleaned on the outside, pierced to let the steam escape and then baked, boiled or steamed in the skin.

After cooking it is then cut in half and the seeds are removed. With a fork, the strands of squash can be twisted on the fork and removed from the skin. It can be placed in bowls to eat like this or added to other ingredients for squash casserole recipes. I do not know why they are so adamant on this process; I don’t think the way I do it can be improved on. It is very delicious! When I make squash casserole recipes with spaghetti squash, sometimes I cut it into smaller pieces and peel it before baking or boiling.

NOTE:Spaghetti squash is a member of the winter squash family meaning that it has a longer storage life than what the summer squash have.

Cut squash in half lengthwise; remove all the seeds.

Bake at 350 degrees until fork tender; remove from oven.

With fork loosen all fibers and scoop into a casserole baking dish.

Add one of the following toppings; return to oven for 15 minutes.

Sweet topping: How to Cook Spaghetti Squash as a dessert!

Dot casserole with butter and sprinkle top with sugar and cinnamon; return to oven 15 minutes. 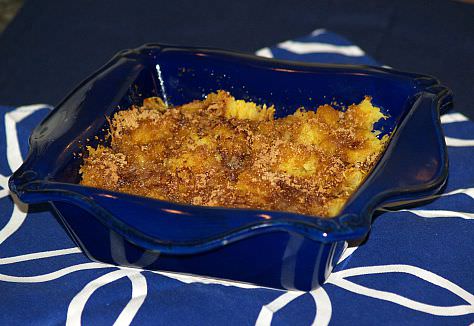 Saute tomatoes, garlic, basil in olive oil until all ingredients are hot.

Spoon into squash and top with fresh grated Parmesan cheese; salt and pepper to taste. 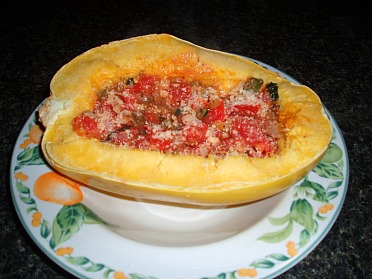 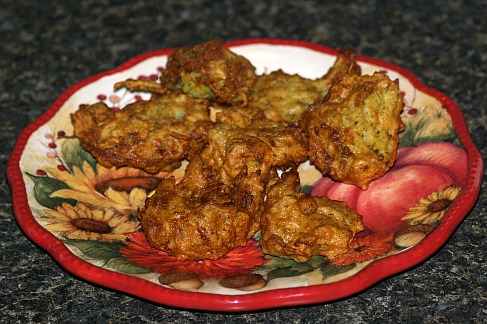 Cut squash in half lengthwise; place squash on a pan and bake for 30 minutes and let cool.

Remove spaghetti strands with a fork, cover and chill thoroughly.

Fry on both sides until golden brown and drain on paper towels. 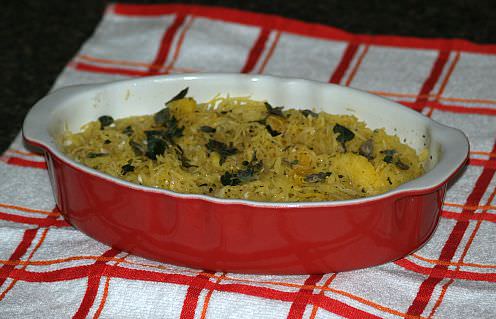 Cut squash in half lengthwise and clean out the seeds.

Bake in oven on a tray for 30 to 40 minutes until tender.

Scoop out pulp with a fork into a casserole baking dish.

Return to the oven for 15 minutes.

Top with the chopped parsley and serve.