How to Make a Knish Recipe

I learned how to make a knish recipe many years ago. I had a restaurant with many Jewish patrons and they were all asking for knishes. It quickly became obvious that knishes were a very popular food in this Jewish community.  I had never heard of them before and I surly did not know how to make them.

Many of our conversations at the restaurant covered how to make a knish recipe. Everyone had their opinion on how each of them thought they should be made. There are many different fillings but the potato was definitely the favorite and also became mine. 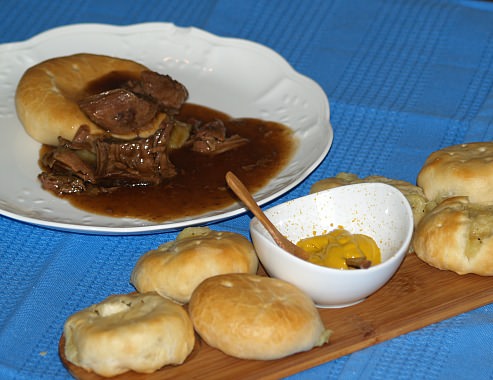 How to Make a Knish Recipe

One of my customers, a very nice lady offered to teach me how to make a knish recipe. Lydia came in and showed me how she makes them for her husband, “a potato knish fanatic” as she called him. She also confided in me a “little secret” of hers. Sometimes when she does not want to make the dough, she purchases refrigerated crescent rolls at the supermarket. She never tells her husband this and she thinks he doesn’t know the difference.

As I was learning how to make a knish recipe, I experimented a lot. I did try the prepared crescent rolls and also the frozen bread dough from the grocery store. I have also tried other dough; some made with yeast and some made with baking powder as leavening. To me yeast dough is much better but I am partial to yeast dough. Although yeast bread dough is good, I prefer a lighter flakier dough which is more like crescent roll dough.

If you want to learn how to make a knish recipe, I have given you several recipes below. The fillings are all good but as I said I love the potato filling (with lots of onion and butter). Sometimes I will add in with the mashed potatoes a little finely chopped cabbage or spinach sautéed in butter. It adds a little change to the taste and adds to the presentation.

When I make knishes I sometimes will make small ones and large ones. After I learned how to make a knish I found that people choose to eat them in different ways. The most popular way is by dipping them in mustard, even the large ones. I started making them in a small size for a party appetizer and people love this size to dip in mustard. I always make the large size also to serve with a meal. This size is delicious to serve covered with beef and gravy.

NOTE: As soon as I learned how to make a knish I learned to cut a slit in the tops before baking. This allows the steam to escape.

HOW TO MAKE A KNISH RECIPE

Learn how to make a knish recipe and use different fillings. This dough can be used with the many filling recipes below.

Sift dry ingredients into a bowl; make a well in the center.

In the well drop in eggs, oil and water; work liquids into flour to form a smooth dough.

Divide dough in half; on floured surface roll dough as thin as possible.

Cut the dough in 2 inch circles; place 1 Tablespoon of filling on each circle.

Fold circle over filling and pinch edges together to seal.

When you learn how to make a knish recipe the potato filling is sure to be one of your favorites.

BROWN ONION in the butter.

With mixer beat into the mashed potatoes the onion butter mixture, egg, salt and pepper. 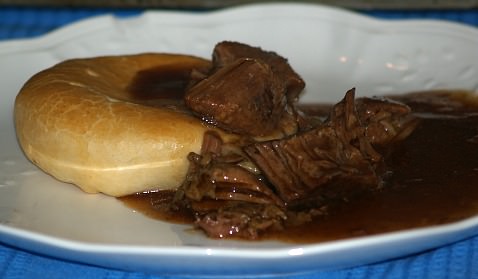 Combine warm water with dry yeast and sugar; set aside about 10 minutes.

Combine in a large bowl 2 ½ cups of the flour, ¼ cup of the butter, milk and salt.

Beat on low speed of mixer until butter is blended in; (Like pea size)

Slowly beat in remaining flour until a soft dough forms and dough ball is formed.

NOTE: I use my hands briefly to smooth the dough ball.

Place dough ball in a clean oiled bowl turning to coat all sides.

Cover bowl with a clean damp towel and set in a warm place until doubled in bulk (About 1 ½ hours).

NOTE: Do not cut short any rising time on these. It is a key for the delicious light flaky texture.

Transfer the dough to LIGHTLY FLOURED jelly roll pan; press the dough evenly down over the pan.

NOTE: The dough is sticky so I dust my fingers with a little flour from time to time.

Remove dough from the pan and place on a lightly flour surface and roll to a rectangle 10X 20 inches.

Cover the lower 2/3 portion of the dough leaving a 1 inch border with as much as needed of the ¾ cup of butter.

Fold upper 1/3 of the dough over buttered portion; bring lower third up over the folded top (Letter style)

Turn vertically on floured surface and roll to a 10 X 22 inch rectangle.

NOTE: Now I use any remaining butter.

Cut dough in half; roll one half to a rectangle 10 X 22 inches

Cut rectangle in half LENGTHWISE; using a pizza cutter or knife cut each half into 6 triangles.

NOTE: After squaring it up there will be some scrapes of dough left.

Place a marble at the base of each triangle and roll toward the point; bend in edges to shape like “C”.

Cover trays with parchment paper; let rise until doubled in bulk 1 to 1 ½ hours.

Beat egg with 2 tablespoons water; brush lightly over each roll.

LOWER TEMPERATURE to 400F degrees and bake 15 minutes longer until rolls are browned. 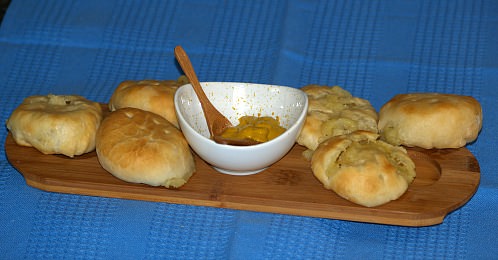 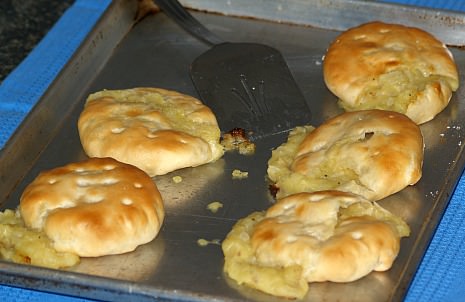 This is a delicious Jewish recipe. I learned how to make a knish recipe in various sizes. Sometimes I make them small to serve like an appetizer and sometimes I make them larger for an entrée. I usually serve the larger ones with beef and gravy or chicken and gravy. Both sizes are great simply with mustard. I measure the small ones SLIGHTLY LESS THAN ¼ CUP. The larger size I MEASURE ½ CUP. I shape both sizes into patties with my hands.

In a large skillet melt butter; add   chopped onion and sauté until tender.

Drain potatoes and place in a mixing bowl; add onions and all butter.

Beat potatoes until whipped and fluffy; add salt and pepper to taste.

Cover bowl with plastic wrap and place in refrigerator until firm or overnight.

Measure and shape potatoes into patties the size you prefer.

Pinch off dough and roll in circles large enough to wrap around potato patties.

Wrap the patties with dough using a little water to seal the dough.

Brush each knish with egg and water beaten together; using a sharp knife cut vents in tops.

Bake about 20 minutes or until lightly browned.